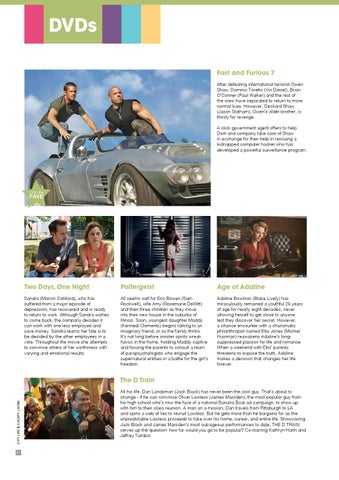 DVDs Fast and Furious 7 After defeating international terrorist Owen Shaw, Dominic Toretto (Vin Diesel), Brian O’Conner (Paul Walker) and the rest of the crew have separated to return to more normal lives. However, Deckard Shaw (Jason Statham), Owen’s older brother, is thirsty for revenge. A slick government agent offers to help Dom and company take care of Shaw in exchange for their help in rescuing a kidnapped computer hacker who has developed a powerful surveillance program.

Sandra (Marion Cotillard), who has suffered from a major episode of depression, has recovered and is ready to return to work. Although Sandra wishes to come back, the company decides it can work with one less employee and save money. Sandra learns her fate is to be decided by the other employees in a vote. Throughout the movie she attempts to convince others of her worthiness with varying and emotional results.

All seems well for Eric Bowen (Sam Rockwell), wife Amy (Rosemarie DeWitt) and their three children as they move into their new house in the suburbs of Illinois. Soon, youngest daughter Maddy (Kennedi Clements) begins talking to an imaginary friend, or so the family thinks. It’s not long before sinister spirits wreak havoc in the home, holding Maddy captive and forcing the parents to consult a team of parapsychologists who engage the supernatural entities in a battle for the girl’s freedom.

Adaline Bowman (Blake Lively) has miraculously remained a youthful 29 years of age for nearly eight decades, never allowing herself to get close to anyone lest they discover her secret. However, a chance encounter with a charismatic philanthropist named Ellis Jones (Michiel Huisman) reawakens Adaline’s longsuppressed passion for life and romance. When a weekend with Ellis’ parents threatens to expose the truth, Adaline makes a decision that changes her life forever.

All his life, Dan Landsman (Jack Black) has never been the cool guy. That’s about to change - if he can convince Oliver Lawless (James Marsden), the most popular guy from his high school who’s now the face of a national Banana Boat ad campaign, to show up with him to their class reunion. A man on a mission, Dan travels from Pittsburgh to LA and spins a web of lies to recruit Lawless. But he gets more than he bargains for as the unpredictable Lawless proceeds to take over his home, career, and entire life. Showcasing Jack Black and James Marsden’s most outrageous performances to date, THE D TRAIN serves up the question: how far would you go to be popular? Co-starring Kathryn Hahn and Jeffrey Tambor.