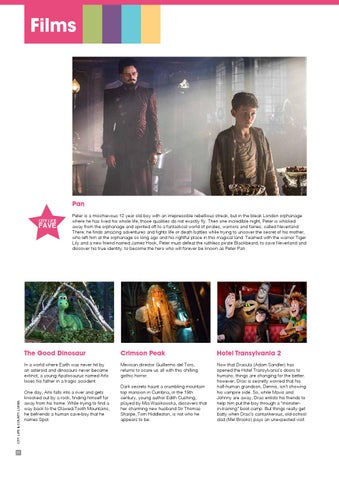 Peter is a mischievous 12 year old boy with an irrepressible rebellious streak, but in the bleak London orphanage where he has lived his whole life, those qualities do not exactly fly. Then one incredible night, Peter is whisked away from the orphanage and spirited off to a fantastical world of pirates, warriors and fairies; called Neverland. There, he finds amazing adventures and fights life or death battles while trying to uncover the secret of his mother, who left him at the orphanage so long ago and his rightful place in this magical land. Teamed with the warrior Tiger Lily and a new friend named James Hook, Peter must defeat the ruthless pirate Blackbeard, to save Neverland and discover his true identity; to become the hero who will forever be known as Peter Pan.

In a world where Earth was never hit by an asteroid and dinosaurs never became extinct, a young Apatosaurus named Arlo loses his father in a tragic accident.

Mexican director Guillermo del Toro, returns to scare us all with this chilling gothic horror.

Now that Dracula (Adam Sandler) has opened the Hotel Transylvania’s doors to humans, things are changing for the better; however, Drac is secretly worried that his half-human grandson, Dennis, isn’t showing his vampire side. So, while Mavis and Johnny are away, Drac enlists his friends to help him put the boy through a “monsterin-training” boot camp. But things really get batty when Drac’s cantankerous, old-school dad (Mel Brooks) pays an unexpected visit.

One day, Arlo falls into a river and gets knocked out by a rock, finding himself far away from his home. While trying to find a way back to the Clawed-Tooth Mountains, he befriends a human cave-boy that he names Spot.

Dark secrets haunt a crumbling mountain top mansion in Cumbria, in the 19th century, young author Edith Cushing, played by Mia Wasikowska, discovers that her charming new husband Sir Thomas Sharpe, Tom Hiddleston, is not who he appears to be.