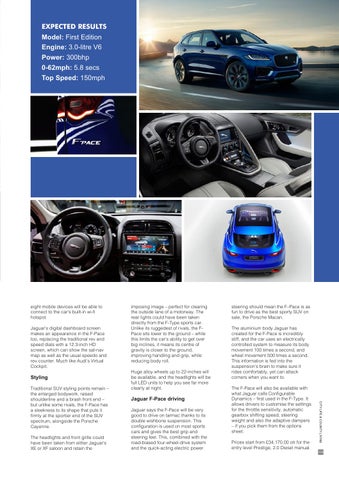 eight mobile devices will be able to connect to the car's built-in wi-fi hotspot. Jaguar's digital dashboard screen makes an appearance in the F-Pace too, replacing the traditional rev and speed dials with a 12.3-inch HD screen, which can show the sat-nav map as well as the usual speedo and rev counter. Much like Audi's Virtual Cockpit.

Huge alloy wheels up to 22-inches will be available, and the headlights will be full LED units to help you see far more clearly at night.

Jaguar F-Pace driving Jaguar says the F-Pace will be very good to drive on tarmac thanks to its double wishbone suspension. This configuration is used on most sports cars and gives the best grip and steering feel. This, combined with the road-biased four-wheel-drive system and the quick-acting electric power

steering should mean the F–Pace is as fun to drive as the best sporty SUV on sale, the Porsche Macan. The aluminium body Jaguar has created for the F-Pace is incredibly stiff, and the car uses an electrically controlled system to measure its body movement 100 times a second, and wheel movement 500 times a second. This information is fed into the suspension's brain to make sure it rides comfortably, yet can attack corners when you want to. The F-Pace will also be available with what Jaguar calls Configurable Dynamics – first used in the F-Type. It allows drivers to customise the settings for the throttle sensitivity, automatic gearbox shifting speed, steering weight and also the adaptive dampers – if you pick them from the options sheet. Prices start from £34,170.00 otr for the entry level Prestige, 2.0 Diesel manual.

Traditional SUV styling points remain – the enlarged bodywork, raised shoulderline and a brash front end – but unlike some rivals, the F-Pace has a sleekness to its shape that puts it firmly at the sportier end of the SUV spectrum, alongside the Porsche Cayenne.

imposing image – perfect for clearing the outside lane of a motorway. The rear lights could have been taken directly from the F-Type sports car. Unlike its ruggedest of rivals, the FPace sits lower to the ground – while this limits the car's ability to get over big inclines, it means its centre of gravity is closer to the ground, improving handling and grip, while reducing body roll.