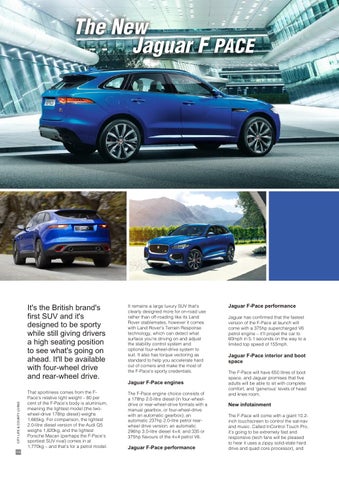 It's the British brand's first SUV and it's designed to be sporty while still giving drivers a high seating position to see what's going on ahead. It'll be available with four-wheel drive and rear-wheel drive.

That sportiness comes from the FPace's relative light weight – 80 per cent of the F-Pace's body is aluminium, meaning the lightest model (the twowheel-drive 178hp diesel) weighs 1,665kg. For comparison, the lightest 2.0-litre diesel version of the Audi Q5 weighs 1,820kg, and the lightest Porsche Macan (perhaps the F-Pace's sportiest SUV rival) comes in at 1,770kg – and that's for a petrol model.

It remains a large luxury SUV that's clearly designed more for on-road use rather than off-roading like its Land Rover stablemates, however it comes with Land Rover's Terrain Response technology, which can detect what surface you're driving on and adjust the stability control system and optional four-wheel-drive system to suit. It also has torque vectoring as standard to help you accelerate hard out of corners and make the most of the F-Pace's sporty credentials.

Jaguar F-Pace performance Jaguar has confirmed that the fastest version of the F-Pace at launch will come with a 375hp supercharged V6 petrol engine – it'll propel the car to 60mph in 5.1 seconds on the way to a limited top speed of 155mph.

Jaguar F-Pace interior and boot space The F-Pace will have 650 litres of boot space, and Jaguar promises that five adults will be able to sit with complete comfort, and 'generous' levels of head and knee room.

New infotainment The F-Pace will come with a giant 10.2inch touchscreen to control the sat-nav and music. Called InControl Touch Pro, it's going to be extremely fast and responsive (tech fans will be pleased to hear it uses a zippy solid-state hard drive and quad core processor), and