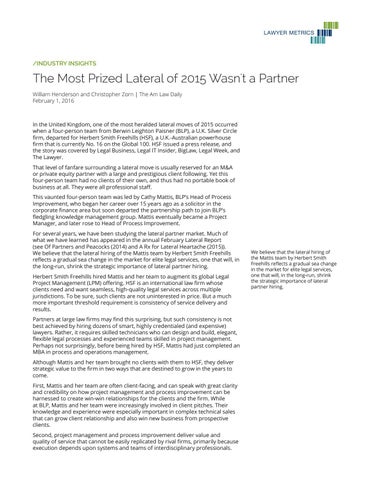 The Most Prized Lateral of 2015 Wasn't a Partner William Henderson and Christopher Zorn | The Am Law Daily February 1, 2016

In the United Kingdom, one of the most heralded lateral moves of 2015 occurred when a four-person team from Berwin Leighton Paisner (BLP), a U.K. Silver Circle firm, departed for Herbert Smith Freehills (HSF), a U.K.-Australian powerhouse firm that is currently No. 16 on the Global 100. HSF issued a press release, and the story was covered by Legal Business, Legal IT Insider, BigLaw, Legal Week, and The Lawyer. That level of fanfare surrounding a lateral move is usually reserved for an M&A or private equity partner with a large and prestigious client following. Yet this four-person team had no clients of their own, and thus had no portable book of business at all. They were all professional staff. This vaunted four-person team was led by Cathy Mattis, BLPâ&#x20AC;&#x2122;s Head of Process Improvement, who began her career over 15 years ago as a solicitor in the corporate finance area but soon departed the partnership path to join BLPâ&#x20AC;&#x2122;s fledgling knowledge management group. Mattis eventually became a Project Manager, and later rose to Head of Process Improvement. For several years, we have been studying the lateral partner market. Much of what we have learned has appeared in the annual February Lateral Report (see Of Partners and Peacocks (2014) and A Rx for Lateral Heartache (2015)). We believe that the lateral hiring of the Mattis team by Herbert Smith Freehills reflects a gradual sea change in the market for elite legal services, one that will, in the long-run, shrink the strategic importance of lateral partner hiring. Herbert Smith Freehills hired Mattis and her team to augment its global Legal Project Management (LPM) offering. HSF is an international law firm whose clients need and want seamless, high-quality legal services across multiple jurisdictions. To be sure, such clients are not uninterested in price. But a much more important threshold requirement is consistency of service delivery and results. Partners at large law firms may find this surprising, but such consistency is not best achieved by hiring dozens of smart, highly credentialed (and expensive) lawyers. Rather, it requires skilled technicians who can design and build, elegant, flexible legal processes and experienced teams skilled in project management. Perhaps not surprisingly, before being hired by HSF, Mattis had just completed an MBA in process and operations management. Although Mattis and her team brought no clients with them to HSF, they deliver strategic value to the firm in two ways that are destined to grow in the years to come. First, Mattis and her team are often client-facing, and can speak with great clarity and credibility on how project management and process improvement can be harnessed to create win-win relationships for the clients and the firm. While at BLP, Mattis and her team were increasingly involved in client pitches. Their knowledge and experience were especially important in complex technical sales that can grow client relationship and also win new business from prospective clients. Second, project management and process improvement deliver value and quality of service that cannot be easily replicated by rival firms, primarily because execution depends upon systems and teams of interdisciplinary professionals.

We believe that the lateral hiring of the Mattis team by Herbert Smith Freehills reflects a gradual sea change in the market for elite legal services, one that will, in the long-run, shrink the strategic importance of lateral partner hiring.

THE MOST PRIZED LATERAL OF 2015 WASN’T A PARTNER

As a result, Mattis and her colleagues are uniquely able to turn successful engagements into large institutional clients whose loyalties flow to the global HSF enterprise. These two dynamics—increased topline sales and stickier client relationships— are wonderful news for law firm leaders. But as this practice spreads to the U.S.— and it’s already happening in at least a handful of AmLaw 200 law firms—it’s bad news for the independent-minded, territorial lateral partner. It is virtually certain that Cathy Mattis and her team departed for HSF for a compensation package that was much closer to an equity partner’s than that of a non-partner professional. But we doubt that even 5 percent of partners in the U.K. or the U.S. appreciate the magnitude of the change that is beginning to take shape. CEMENTING LOYALTIES TO THE FIRM The emergence of world-class process specialists means that large corporate law firms are, for the first time in several decades, creating firm-specific capital. Simply put, it is the creation of a resource that will produce its highest economic value only within the specific firm. If a lawyer leaves, the underlying resource remains, with the result that client loyalties flow primarily to the law firm rather than the lawyer. When it’s working well, lawyers spend their days augmenting the firm’s firm-specific capital. Why? Because doing so offers the highest expected return and lowest risk-reward ratio over the short, medium, and long term. Created a century ago, the Cravath system is a classic example of creating firm-specific capital. The contours of that system were simple: Cravath offered young lawyers top-of-the-market salaries to focus on specific groups of corporate clients using a detailed work system. Those clients, in turn, pay the firm a premium price for work they cannot buy elsewhere. A subset of those young lawyers become partners and share in the profits of the enterprise, but all of them receive training that has substantial resale value to the clients and to other law firms. As a result, those lawyers knew that if they cast their lot with Cravath, they would fare very well over the long run. The result of that system was predictable: Highly talented people joined the firm and worked tirelessly for the enterprise. Those efforts grew the firm-specific capital and wedded clients ever more tightly to the firm. (It is worth noting that McKinsey is entirely based on this same model.) By the 1980s and 90s, large U.S. law firms were two or three generations removed from their founding partners. They were also highly profitable, a fact that became widely known through the advent of the legal press. Meanwhile, within large corporate clients, general counsel were increasingly taking on trusted advisor relationships with their CEOs. They were also put in charge of hiring and managing outside counsel, and developed the mantra “we hire the lawyer, not the firm.” The result of that practice has been very bad for law firms, as it gave individual lawyers with strong client followings the ability to lateral (or threaten to lateral) to another firm while retaining the full value of their marginal contribution to the firm. It was this dynamic that caused Larry Ribstein, in 2010, to write about The Death of BigLaw. THE U.K.’S HEAD START On the application of people, process, and technology to the practice of law, U.K. and Australian law firms are significantly more advanced than their U.S. counterparts. The origins of this lead lie in two interrelated factors. The first is compensation: U.K. and Australian firms have remained much closer to their lockstep roots, which tends to incentivize greater collaboration and longer time horizons among partner-owners. Second, both U.K. and Austrialian firms outgrew their home markets about twenty years before U.S. firms, which caused them to become pioneers in client-friendly alternatives to the billable hour. Stated another way, necessity—the mother of invention—visited the U.K. and Australia first.

Associates Number of Lawyers ORIGINAL CRAVATH SYSTEM: “BUILD MODEL.” Under the Cravath system, associates were either elevated to partner/owner, or moved out to the market with substantial resale value.

It is possible to characterize the process revolution as something that was crafted at the very highest levels of U.K. and Australian law firms, but that would far from the truth. Mattis’s career is a wonderful case in point: she became a professional support lawyer primarily to create flexibility for her family life. At the time, knowledge management as a field within the legal industry was still in its infancy; Mattis was part of the first generation of project managers in law firms. From that perch, she saw the enormous potential for applying process principles to obtain gains in quality, efficiency, and cycle times. So she instructed herself on the topic, both through formal education and via practical implementation. At BLP, her team’s initiatives were regularly in play for the annual FT Innovative Lawyer Awards. TRACK RECORD OF SUCCESS What makes Mattis and her team so valuable on the lateral market is that they developed, built and managed a best-in-class process team at a major U.K. law firm; as a result, it was not unreasonable to think that they could, if properly resourced, do it again. Although Mattis and her team had no portable clients, they had a track record of successful execution. From a distance, project management and process improvement may look like arcane, technical specialties, but successful execution turns primarily on effective change management skills: picking low resistance starting points, getting early wins, avoiding jargon, embracing simplicity, and making the change process enjoyable and non-threatening. In the years to come, as firms like HSF siphon away market share, law firm leaders are going to be scrambling to find more professionals like Cathy Mattis. At their best, such non-lawyer professionals are going to enjoy market power that rivals equity partners with large client followings. So what is the end game for the lateral partner market? We foresee a day when clients come to expect the benefits that flow from sophisticated project management and process improvement; to be at a firm without these capabilities is to risk losing the client. Knowing this, high-performing partners will seek out such firms, even as it becomes clear that those firms’ clients are loyal to the system, not the individual lawyer. Thus, for many law firm partners, the very last move on the lateral chessboard may be to a firm that will transform their personal book of business into institutional clients. Although this move may appear altruistic to the clients themselves, the motivation will in fact be supplied by the lawyers’ own financial self-interest. Industry Insights is an ongoing series of papers on the trends driving the legal industry, authored by members of the Lawyer Metrics Team.

“Tomorrow’s legal world, as predicted and described here, bears little resemblance to that of the past. Legal institutions and lawyers are at a crossroads, I claim, and are poised to change more radically over the next two decades than they have over the last two centuries. If you are a young lawyer, this revolution will happen on your watch.” Susskind, R. E. (2013). Tomorrow’s lawyers: An introduction to your future. Oxford, United Kingdom: Oxford University Press. (cited in Henderson, W. D. (2014) Living Through a Paradigm Shift. NALP Bulletin.) The Most Prized Lateral of 2015 Wasn't a Partner

On news of the lateral move of a process improvement team, this article suggests that a sea change in the market for legal services is occur...

The Most Prized Lateral of 2015 Wasn't a Partner

On news of the lateral move of a process improvement team, this article suggests that a sea change in the market for legal services is occur...