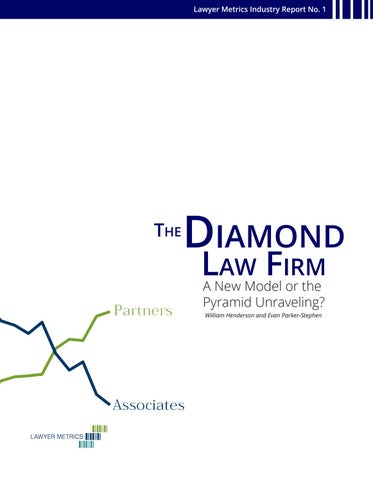 The days of the highly leveraged partner-associate pyramid model appear to be coming to a close. Although this may surprise many industry insiders (it surprised us), traditional associate leverageâ&#x20AC;&#x201C; defined as a simple ratio of associates to partnersâ&#x20AC;&#x201C;peaked nearly a quarter century ago. See Figure 1. Since 2008, there are fewer associates working in National Law Journal (NLJ) 250 law firms than partners.

Yet, the uptick in the proportion of partners is primarily a function of a broader market movement toward more senior leverage. In the early 1990s, fewer than one out of 20 lawyers in the NLJ 250 were non-equity partners. By 2012, this proportion increased to one in six (16%). See Figure 2. Is this change the result of a deliberate, long-term strategy to reduce the number of associates, or instead the cumulative result of two decades of managing the firm for the current fiscal year? We suspect it is the latter.

For decades, the conventional wisdom held that growing profits were primarily the result of higher associate leverage. During the 2008-09 recession, industry insiders suggested that the binge on associate leverage was over and that the “diamond” would eventually replace the traditional associate-partner pyramid model. Yet, as we now know, the decline in associate leverage is part of a larger structural shift. Remarkably, during the 1990s and early to mid-2000s, when large law firms were frenetically hiring entry-level associates and increasing salaries from $95,000 to $125,000 to $160,000, the relative importance of law firm associates was actually going down. A more significant factor in BigLaw growth was the retention of mid-career lawyers—those with 10-plus years of experience—without making them owners. Why does it take so long to recognize these broader structural forces that are reshaping the market for corporate legal services? Part of this perception gap is attributable to lack of data—legal sector data, such as this industry report, are relatively recent innovations. Another reason is the powerful mental models we all use to make sense of complex organizations such as law firms. The pyramid structure is a simple, familiar, and useful way to communicate the business logic of the large law firm. Yet, because of slow, gradual change within the market, the pyramid model is no longer an accurate description of reality. The data are telling us that we have moved on to something else. www.lawyermetrics.com

If our common perceptions of the corporate legal market are inaccurate, is it possible that our common strategies are off the mark as well?

The Diamond Law Firm A firm with a diamond structure has a relatively small number of entry-level associates, a growing bulge in the non-equity and counsel ranks, a sizable but largely invisible group of permanent staff attorneys, and a proportionately smaller equity class of partners who grow and control valuable client relationships. See Figure 3. The most important question we can ask is whether the diamond model is a new, sustainable model that is replacing the law firm pyramid, or alternatively, whether it is the shape of the pyramid as it unravels? We think the answer to this question is likely the latter rather than the former. This unraveling is occurring because of two broader market developments. First, in the last 35 years, the nation’s 250 large law firms have grown by a factor of five, growing from an average of 102 attorneys in 1977 to a high-water mark of 529 in 2008 (the average in 2012 was 510 lawyers). As a result, for the first time in the modern era, there is a surplus of legal technicians who have the requisite skills and experience to meet the needs of large organizational clients. Second, the complexity of their legal work in the 21st century is increasing much faster than corporate revenues. For the last several decades, this complexity has been a boon to the nation’s large law firms, who dealt with this problem by adding capacity. In the short to medium term, this collective market response benefited large law firms—hence the steady and significant real growth in profits per partner from the 1970s to the present. Yet, in the longer run—the period we are now entering—the relentless increase in the complexity of business and regulation has caused many clients to strain under the weight of a traditional time-and-materials billing model. This pressure is fueling the urgency for alternative billing arrangements that would incentivize efficiency and innovation. It is also opening the door to various types of legal vendors who use process, technology, and labor arbitrage to perform a wide array of legal work formerly handled by junior lawyers in law firms. Because complexity will only increase in the future, the traditional associate-partner pyramid model is likely to further unravel. As www.lawyermetrics.com

shown in Figures 1 and 2, the decline in associate-level employment is not a phenomenon of the 2008-09 recession. Rather, it is the extension of a much longer industry trend line. According to data collected by the National Association of Law Placement (NALP), among the nearly 600 firms that participate in the on-campus-interview process, the number of summer associates declined from 11,302 in 2002 to 5,584 in 2012—a decline of more than 50%. Moreover, associate hiring is becoming more concentrated. In 2002, 69% of summer associates were employed by AmLaw 200 law firms. Ten years later, the percentage had increased to 89%. This surge in the percentage of large law firms is likely attributable to the slow but relentless consolidation of law firms serving large corporate clients.

What Does the Future Hold? Large U.S. law firms appear to be in uncharted waters, as the dynamics that produced several decades of growth—the shortage of specialized lawyers in a less complex world—are unlikely to return. Although the market has gradually migrated to a diamond model, its emergence is likely less a product of careful strategy deliberations than a series of short-term, ad hoc responses designed to deal with harsh and unfamiliar market conditions. The biggest risk of not having an accurate, coherent view of the legal market is that a firm is likely to gravitate toward what feels good in the short-term and be largely unaware of hidden costs that will have to be paid in the future. We think that very risk is now playing itself out within many large law firms. This is occurring because one of the primary attractions of the diamond model—albeit one that is likely limited to the short- to medium-term—is that it can result in higher revenues per lawyer and hence higher law firm profits. Figure 4 shows two trend lines for firms in the AmLaw 200. The blue line reflects overall revenues per lawyer for the AmLaw 200 during the 1998 to 2012 time period. Implicitly, this includes the benefit of shifting law firm demographics toward a larger proportion of mid-career and senior lawyers, who command a higher billing rate. In contrast, the orange line uses multivariate statistical analysis to estimate the RPL in the AmLaw 200 if the proportion of associates and partners had remained constant at the 1998 level throughout the entire period.

The differential is approximately $15,000 per lawyer, which translates into roughly $60,000 in higher profits per equity partner. Our models also suggest that the greater reliance on non-equity partners has increased law firms’ average RPL by approximately $20,000 per lawyer. Arguably, over the short to medium term, the economics of more senior leverage have been hard for most large firms to resist. Yet, over the longer term, is the diamond model a viable strategy? On the one hand, it makes sense to keep in inventory what the client wants—specialized legal talent with enough experience to perform the legal work efficiently. Yet, the efficiency—or, more accurately, the value—is based on a skilled artisan lawyer who renders his or her services under a billable hour model. At present, most large law firms generate the majority of their revenues by selling the expertise of highly experienced lawyers who possess what the Nobel Laureate Daniel Kahneman describes as “intuitive expertise.” Decades of work in specialized areas of law in a wide variety of contexts enable these lawyers to efficiently solve complex legal and business questions. Corporate clients may wince at the $900 per hour billing rate, but they lack the ability to cost-effectively replicate these results with their own internal capacity. So $900 per hour can be, in fact, a relative bargain, as long as it is not bundled together with the output of novice junior lawyers. On the other hand, mid-career and senior talent is not a resource that can be easily renewed or replaced. Talented lawyers with a www.lawyermetrics.com

Figure 4. Revenue Per Lawyer as a Function of Firm Demographics and Time

client following are like all other lawyers—they age, slow down, and eventually retire. Aside from a small percentage of government lawyers who lateraled into private practice, today’s senior and midlevel lawyers generally acquired their skills and expertise by coming up through the associate ranks. As Kahneman notes in his book, Thinking, Fast and Slow, “Whether professionals have a chance to develop intuitive expertise depends essentially on the quality and speed of feedback, as well as on sufficient opportunity to practice.” Remarkably, although it goes to the very core of their business, very few large law firms seem to be concerned with this issue. According to a 2012 survey by ALM, 74% of managing partners anticipate an increase in the hiring of lateral associates over the next five years, yet only 15% foresee hiring more first-year associates. At the market level, however, the numbers don’t add up, as these numbers suggest that the market for lateral associates is in the process of thinning out and thus will not be a reliable source for high-quality legal talent.

The reluctance of large law firms to reload their junior talent likely explains why the satisfaction of midlevel associates working in large law firms is at a near historic highâ&#x20AC;&#x201D;although they are proportionately fewer in number than in years past, they enjoy significant market power, at least in the short to medium term. In the longer term, however, the clients they hope to inherit will increasingly demand more cost-effective legal solutions that can only be delivered by redesigning the way that complex legal work is sourced, performed, and delivered. The buying habits of corporate legal departments donâ&#x20AC;&#x2122;t change overnight. They too are in gradual state of evolution. Firms that want to get ahead of this change curve need to do two things. First, start hiring junior talent again. Highly motivated and able law school grads are available for less than six-figures. Second, provide the type of training and mentoring that enables these lawyers to deliver superior value to clients. We think that firms that pursue this path will rediscover the power of a social contract that binds together the fortunes of junior and senior lawyers who share a commitment to integrity and professional excellence.

Conclusion The Diamond model is unlikely to be a long-term replacement for the traditional associate-partner pyramid. Rather, it is at best a way station toward a new model that delivers better, faster, and cheaper legal products and services. Solving this business challenge requires acknowledging that the old way no longer works. On this score, we hope this industry report has been helpful. The Diamond Law Firm: A New Model or the Pyramid Unraveling?

Examining over 35 years of large law firm data, this article asserts that the market for associates peaked over 25 years ago and a new "diam...

The Diamond Law Firm: A New Model or the Pyramid Unraveling?

Examining over 35 years of large law firm data, this article asserts that the market for associates peaked over 25 years ago and a new "diam...