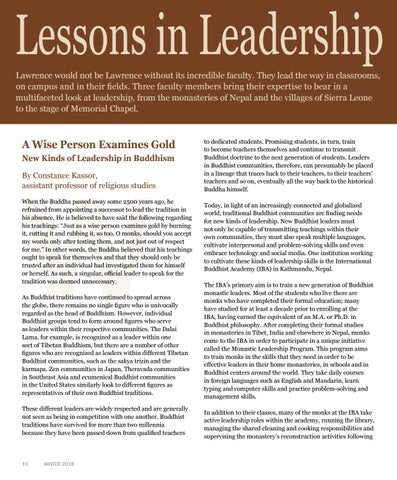 Lessons in Leadership Lawrence would not be Lawrence without its incredible faculty. They lead the way in classrooms, on campus and in their fields. Three faculty members bring their expertise to bear in a multifaceted look at leadership, from the monasteries of Nepal and the villages of Sierra Leone to the stage of Memorial Chapel.

By Constance Kassor, assistant professor of religious studies When the Buddha passed away some 2500 years ago, he refrained from appointing a successor to lead the tradition in his absence. He is believed to have said the following regarding his teachings: “Just as a wise person examines gold by burning it, cutting it and rubbing it, so too, O monks, should you accept my words only after testing them, and not just out of respect for me.” In other words, the Buddha believed that his teachings ought to speak for themselves and that they should only be trusted after an individual had investigated them for himself or herself. As such, a singular, official leader to speak for the tradition was deemed unnecessary. As Buddhist traditions have continued to spread across the globe, there remains no single figure who is univocally regarded as the head of Buddhism. However, individual Buddhist groups tend to form around figures who serve as leaders within their respective communities. The Dalai Lama, for example, is recognized as a leader within one sect of Tibetan Buddhism, but there are a number of other figures who are recognized as leaders within different Tibetan Buddhist communities, such as the sakya trizin and the karmapa. Zen communities in Japan, Theravada communities in Southeast Asia and ecumenical Buddhist communities in the United States similarly look to different figures as representatives of their own Buddhist traditions. These different leaders are widely respected and are generally not seen as being in competition with one another. Buddhist traditions have survived for more than two millennia because they have been passed down from qualified teachers

to dedicated students. Promising students, in turn, train to become teachers themselves and continue to transmit Buddhist doctrine to the next generation of students. Leaders in Buddhist communities, therefore, can presumably be placed in a lineage that traces back to their teachers, to their teachers’ teachers and so on, eventually all the way back to the historical Buddha himself. Today, in light of an increasingly connected and globalized world, traditional Buddhist communities are finding needs for new kinds of leadership. New Buddhist leaders must not only be capable of transmitting teachings within their own communities, they must also speak multiple languages, cultivate interpersonal and problem-solving skills and even embrace technology and social media. One institution working to cultivate these kinds of leadership skills is the International Buddhist Academy (IBA) in Kathmandu, Nepal. The IBA’s primary aim is to train a new generation of Buddhist monastic leaders. Most of the students who live there are monks who have completed their formal education; many have studied for at least a decade prior to enrolling at the IBA, having earned the equivalent of an M.A. or Ph.D. in Buddhist philosophy. After completing their formal studies in monasteries in Tibet, India and elsewhere in Nepal, monks come to the IBA in order to participate in a unique initiative called the Monastic Leadership Program. This program aims to train monks in the skills that they need in order to be effective leaders in their home monasteries, in schools and in Buddhist centers around the world. They take daily courses in foreign languages such as English and Mandarin, learn typing and computer skills and practice problem-solving and management skills. In addition to their classes, many of the monks at the IBA take active leadership roles within the academy, running the library, managing the shared cleaning and cooking responsibilities and supervising the monastery’s reconstruction activities following 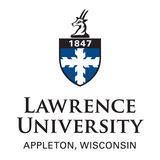