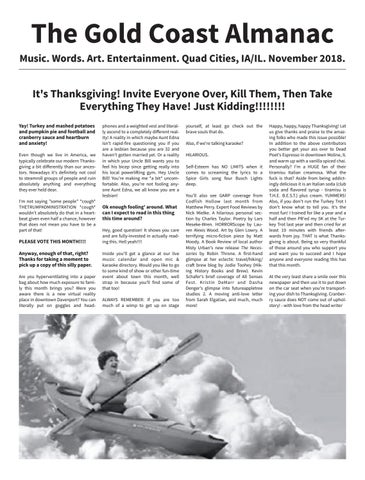 It&#39;s Thanksgiving! Invite Everyone Over, Kill Them, Then Take Everything They Have! Just Kidding!!!!!!!! Yay! Turkey and mashed potatoes and pumpkin pie and football and cranberry sauce and heartburn and anxiety! Even though we live in America, we typically celebrate our modern Thanksgiving a bit diďŹ&amp;#x20AC;erently than our ancestors. Nowadays it&#39;s definitely not cool to steamroll groups of people and ruin absolutely anything and everything they ever held dear. I&#39;m not saying &quot;some people&quot; *cough* THETRUMPADMINISTRATION *cough* wouldn&#39;t absolutely do that in a heartbeat given even half a chance, however that does not mean you have to be a part of that!

PLEASE VOTE THIS MONTH!!!! Anyway, enough of that, right? Thanks for taking a moment to pick up a copy of this silly paper. Are you hyperventilating into a paper bag about how much exposure to family this month brings you? Were you aware there is a new virtual reality place in downtown Davenport? You can literally put on goggles and head-

phones and a weighted vest and literally ascend to a completely diďŹ&amp;#x20AC;erent reality! A reality in which maybe Aunt Edna isn&#39;t rapid-fire questioning you if you are a lesbian because you are 32 and haven&#39;t gotten married yet. Or a reality in which your Uncle Bill wants you to feel his bicep since getting really into his local powerliting gym. Hey Uncle Bill! You&#39;re making me *a bit* uncomfortable. Also, you&#39;re not fooling anyone Aunt Edna, we all know you are a lesbian!

Ok enough fooling&#39; around. What can I expect to read in this thing this time around? Hey, good question! It shows you care and are fully-invested in actually reading this. Hell yeah!!!! Inside you&#39;ll get a glance at our live music calendar and open mic &amp; karaoke directory. Would you like to go to some kind of show or other fun-time event about town this month, well strap in because you&#39;ll find some of that too! ALWAYS REMEMBER: If you are too much of a wimp to get up on stage

Happy, happy, happy Thanksgiving! Let us give thanks and praise to the amazing folks who made this issue possible! In addition to the above contributors you better get your ass over to Dead Poet&#39;s Espresso in downtown Moline, IL and warm up with a vanilla spiced chai. Personally? I&#39;m a HUGE fan of their tiramisu Italian creamosa. What the fuck is that? Aside from being addictingly delicious it is an Italian soda (club soda and flavored syrup - tiramisu is T.H.E. B.E.S.T.) plus cream. YUMMERS! Also, if you don&#39;t run the Turkey Trot I don&#39;t know what to tell you. It&#39;s the most fun! I trained for like a year and a half and then PR&#39;ed my 5K at the Turkey Trot last year and then cried for at least 10 minutes with friends aterwards from joy. THAT is what Thanksgiving is about. Being so very thankful of those around you who support you and want you to succeed and I hope anyone and everyone reading this has that this month. At the very least share a smile over this newspaper and then use it to put down on the car seat when you&#39;re transporting your dish to Thanksgiving. Cranberry sauce does NOT come out of upholstery! - with love from the head writer

Check out the November issue of the Gold Coast Almanac. 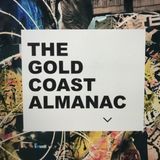