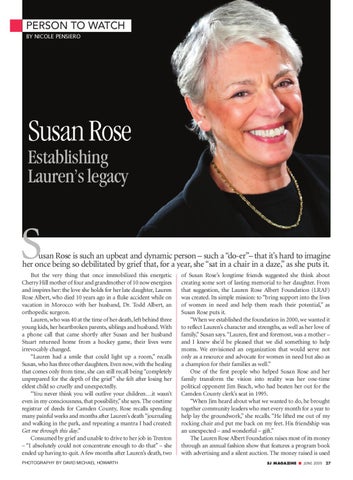 PERSON TO WATCH BY NICOLE PENSIERO

usan Rose is such an upbeat and dynamic person – such a “do-er”– that it’s hard to imagine her once being so debilitated by grief that, for a year, she “sat in a chair in a daze,” as she puts it.

But the very thing that once immobilized this energetic Cherry Hill mother of four and grandmother of 10 now energizes and inspires her: the love she holds for her late daughter, Lauren Rose Albert, who died 10 years ago in a fluke accident while on vacation in Morocco with her husband, Dr. Todd Albert, an orthopedic surgeon. Lauren, who was 40 at the time of her death, left behind three young kids, her heartbroken parents, siblings and husband. With a phone call that came shortly after Susan and her husband Stuart returned home from a hockey game, their lives were irrevocably changed. “Lauren had a smile that could light up a room,” recalls Susan, who has three other daughters. Even now, with the healing that comes only from time, she can still recall being “completely unprepared for the depth of the grief” she felt after losing her eldest child so cruelly and unexpectedly. “You never think you will outlive your children…it wasn’t even in my consciousness, that possibility,” she says. The onetime registrar of deeds for Camden County, Rose recalls spending many painful weeks and months after Lauren’s death “journaling and walking in the park, and repeating a mantra I had created: Get me through this day.” Consumed by grief and unable to drive to her job in Trenton – “I absolutely could not concentrate enough to do that” – she ended up having to quit. A few months after Lauren’s death, two PHOTOGRAPHY BY DAVID MICHAEL HOWARTH

of Susan Rose’s longtime friends suggested she think about creating some sort of lasting memorial to her daughter. From that suggestion, the Lauren Rose Albert Foundation (LRAF) was created. Its simple mission: to “bring support into the lives of women in need and help them reach their potential,” as Susan Rose puts it. “When we established the foundation in 2000, we wanted it to reflect Lauren’s character and strengths, as well as her love of family,” Susan says. “Lauren, first and foremost, was a mother – and I knew she’d be pleased that we did something to help moms. We envisioned an organization that would serve not only as a resource and advocate for women in need but also as a champion for their families as well.” One of the first people who helped Susan Rose and her family transform the vision into reality was her one-time political opponent Jim Beach, who had beaten her out for the Camden County clerk’s seat in 1995. “When Jim heard about what we wanted to do, he brought together community leaders who met every month for a year to help lay the groundwork,” she recalls. “He lifted me out of my rocking chair and put me back on my feet. His friendship was an unexpected – and wonderful – gift.” The Lauren Rose Albert Foundation raises most of its money through an annual fashion show that features a program book with advertising and a silent auction. The money raised is used SJ MAGAZINE ■ JUNE 2009 27 South Jersey Magazine article about Susan Rose the founder of Lauren's Legacy, she is a person to watch.

South Jersey Magazine article about Susan Rose the founder of Lauren's Legacy, she is a person to watch.