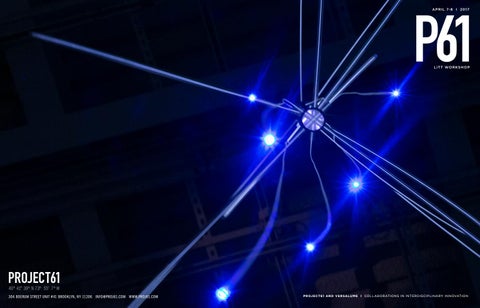 The LiTT Workshop was a 2-day interdisciplinary innovation workshop that put together teams of companies, artists, and engineers to build a prototype using a new material, partnering with light transformation technologists Versalume. Project61 created an exploratory space for teams of different backgrounds to collaborate creatively. Our interdisciplinary teams included architects, fashion designers, sound artists, light artists, choreographers, industrial designers, optics engineers, electrical engineers, across a spectrum of interests and expertise. Together, they imagined and actualized a pressure-sensitive shoe to track running technique, a gently rotating, sculptural new space, and a steel mobius strip that responded to surrounding sounds. Jackets, bacteria-cleansing fabric textiles, and way-finding in interior design rounded out the mix. It exemplified what can be achieved when professional specialties are enhanced by creative forces. #getlitt

â&#x20AC;&#x153;I have learned over my career that innovation happens when one puts the brightest minds together in an environment that allows teams to collaborate: learning from each other, applying out-of-the-box thinking, and creating new applications and usages for technologies that did not exist before. More importantly, combining people from interdisciplinary fields and backgrounds will allow them to see things from a different perspective. Partnering with Project61 for LiTT gives us the opportunity to have artists and designers working alongside engineers so that they can learn from each other and inspire each other.â&#x20AC;?

“The LiTT workshop experience was one of the best experiences of my professional life. I would describe it as almost euphoric.” Peter Wigley

“The idea that Fibrance needs to be brighter in order to function as a lighting resource for a vitrine is something I will definitely take away from the workshop and actively develop.” Peter Wigley

“Everyone contributed their own expertise from their different disciplines, which generated faster iterations and better ideation.” Michelle Kang Architect/atelierjones

â&#x20AC;&#x153;It was really interesting to see three entirely different philosophies and mindsets come together. Getting from Point A to Point B was not a straight line, but an accumulation of different paths. It was interesting to be able to achieve the same goal in different ways.â&#x20AC;? CarlMaterials Crossland Scientist

“It helped me see other ways to integrate Fibrance. The integration of the fibers into the mobius strip took a new turn really quickly, because each way of attaching the fiber gave the material a new look. It inspired us to show how different visual effects could be seen by being dependent on how it was integrated.” CarlMaterials Crossland Scientist

“Carl and I were able to have a mutual exchange of technical knowledge. We both had experience with the conversion of sound into light in our different projects, but we applied completely different techniques when executing the final object.”

“When working with artists, I had to give real consideration to the final stage of the product, the look and feel and how other people understand it. For example, in one iteration, I wanted to attach a laser to the outside of the tube because it fit perfectly. But our team needed to answer the question of does it function well and look good? ” Spencer Klubben Biomedical Engineer

“When you work with a group of like-minded individuals, you often come up with the same solutions to the same problems. But with a mix of people, you get new solutions and new problems. Personality and discipline is very often intertwined, but being artistic isn’t finite. It’s about having a creative mindset throughout the entire process.” Spencer Klubben Biomedical Engineer

The LiTT workshop really reinforced the idea that prototypes are incredibly powerful…and that ideation needs to be actively encouraged.”

“Working so closely with an engineer was great and even helped clarify some of my own client interactions. Instead of dreading my weekly meetings with an engineer I’m working with, I value how much can get done in that conversation.” Heath Wagoner Artist

â&#x20AC;&#x153;Everyone had clear creative output which made planning incredibly easy because everyone knew what their roles were. I felt like everyone in our team genuinely took ownership and responsibility of their roles - everyone was invested and cared about the final object.â&#x20AC;? Michelle Kang Architect/atelierjones

Project61 is an interdisciplinary innovation consultancy that focuses on increasing the speed of R&D cycles through creative collaborations. It was founded in 2016 in Bushwick by Laura Schwamb and Maureen Chung, who recognized the financial force of artists' perspectives in traditional innovation processes. By fostering understanding between disciplines through cultural production, Project61 allows there to be a mutually beneficial relationship between commercial goals, technological advances, and artistic vision. Because we believe that our endeavor will result not only in significant works of art, technological advances, and long-lasting shared learnings, but a future of ongoing collaborations between art and industry. 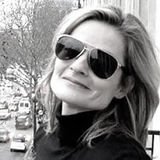