Through Our Hands Magazine Issue 2 Aug 2014 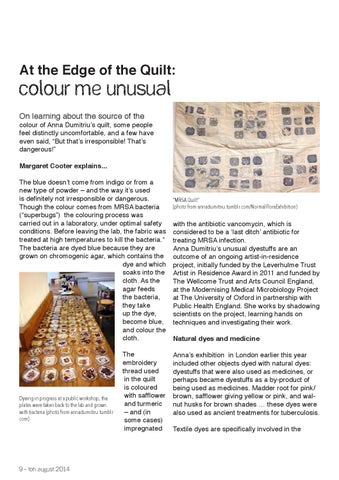 At the Edge of the Quilt:

Colour Me Unusual On learning about the source of the

colour of Anna Dumitriu’s quilt, some people feel distinctly uncomfortable, and a few have even said, “But that’s irresponsible! That’s dangerous!” Margaret Cooter explains... The blue doesn’t come from indigo or from a new type of powder – and the way it’s used is definitely not irresponsible or dangerous. “MRSA Quilt” (photo from annadumitriu.tumblr.com/NormalFloraExhibition) Though the colour comes from MRSA bacteria (“superbugs”) the colouring process was carried out in a laboratory, under optimal safety with the antibiotic vancomycin, which is conditions. Before leaving the lab, the fabric was considered to be a ‘last ditch’ antibiotic for treated at high temperatures to kill the bacteria.* treating MRSA infection. The bacteria are dyed blue because they are Anna Dumitriu’s unusual dyestuffs are an grown on chromogenic agar, which contains the outcome of an ongoing artist-in-residence dye and which project, initially funded by the Leverhulme Trust soaks into the Artist in Residence Award in 2011 and funded by cloth. As the The Wellcome Trust and Arts Council England, agar feeds at the Modernising Medical Microbiology Project the bacteria, at The University of Oxford in partnership with they take Public Health England. She works by shadowing up the dye, scientists on the project, learning hands on become blue, techniques and investigating their work. and colour the cloth. Natural dyes and medicine

Dyeing in progress at a public workshop; the plates were taken back to the lab and grown with bacteria (photo from annadumitriu.tumblr. com)

Anna’s exhibition in London earlier this year included other objects dyed with natural dyes: dyestuffs that were also used as medicines, or perhaps became dyestuffs as a by-product of being used as medicines. Madder root for pink/ brown, safflower giving yellow or pink, and walnut husks for brown shades … these dyes were also used as ancient treatments for tuberculosis. Textile dyes are specifically involved in the

Through Our Hands Magazine Issue 2 Aug 2014