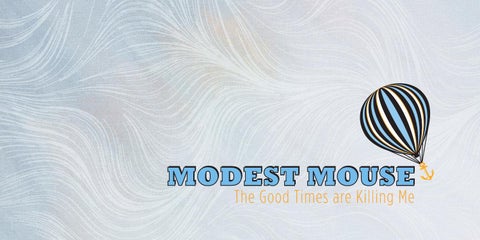 Isaac was born in Helena, Montana on July 9, 1975. Currently the lead singer, guitarist, banjoist, and songwriter for the American indie rock band Modest Mouse, as well as his side project band, Ugly Casanova. As a songwriter he is noted for his clever wordplay and frequent use of metaphors, philosophical lyrics, themes of oppressive rural lifestyles, and certain phrases and sayings commonly used in the early to mid-20th century and in blue collar environments. Isaac's main guitar is custom made by Wicks Guitars. His amps are custom made by Soursound, based on a Fender SuperSix, but are highly modified. In October 2005, Brock started his own record label called Glacial Pace. The label used to be a subsidiary of Epic Records, but is now independent. Its first signee was Minnesota songwriter Mason Jennings, followed by Love As Laughter, Marcellus Hall, Mimicking Birds, Morning Teleportation, and Talkdemonic.

Eric was born November 16, 1974. He is currently the bass guitarist, background vocalist, and founding member of the indie rock band Modest Mouse. He started playing bass because no one else played bass he knew and he thought it was cool. He always wanted to be in a band growing up and Modest Mouse was the first band he was in. Eric Judy appeared on Adam Forknerâ&#x20AC;&#x2122;s first solo album in 2003. He also is a member of Isaack Brock's side project Ugly Casanova. Judy is known for his atmospheric, sustained and yet reserved sound, which complements the often irregular and abrasive guitar work of Brock. He usually plays the middle to high ranges on his bass. He also uses a pick. In an interview with Bass Player online, Judy described his playing style: "I don't do anything that weird, but I don't think my playing is conventional. I pick the strings pretty hard, using a lot of upstrokes. I know that as a bass player I'm supposed to hold stuff down no matter what, but melody is very important to meâ&#x20AC;&#x201D;I tend to play high up on the neck."

Jeremiah was born in Oahu, Hawaii on March 4, 1977. He is a founding member and drummer of the indie rock band Modest Mouse from 1993 to March 2003, and again from July 2004 to present. In the mid-1990s, Green also played with the bands Satisfact on K Records, Red Stars Theory on Touch and Go Records, and Peeved on Distressed Records. Of his work on Sad Sappy Sucker, Spencer Owen at Pitchfork Media has said, "Jeremiah Green proves himself to be one of indie rock's best drummers, even this early on in the game. He recently placed 37th in Stylus Magazine's list of "50 Greatest Rock Drummers", where Jonathan Bradley describes his drumming: “His rhythms can be as unkempt and intricate as the music they underpin (the rolling shuffle of “Grey Ice Water,” or the stumbling clatter of “Truckers Atlas,” for instance), but they are always strong enough to bolster the momentum of even the most meandering tracks. And when presented with a genuine groove, like the lean, funky “Tiny Cities Made of Ashes,” he forces the band to march in lockstep behind him.”

DISK 1 : BUILDING NOTHING OUT OF SOMETHING 1. Never Ending Math Equation 2. Interstate 8 3. Broke 4. Medication 5. Workin’ on leavin’ the livin’ 6. All Night Dinner 7. Baby Blue Sedan 8. A life of arctic Sounds

DISK 2 : HISTORY IN THE SOUND WAVES This is apart of a box set created for Modest Mouse fans.

This is apart of a box set created for Modest Mouse fans.