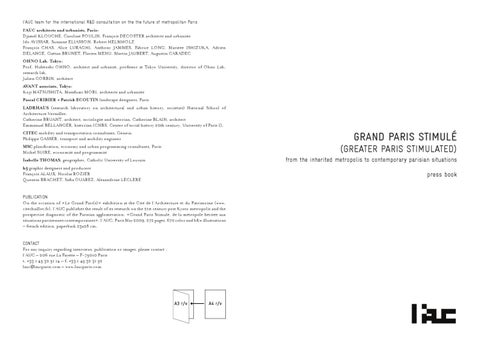 from the inherited metropolis to contemporary parisian situations

The Metropolis of Climates Two tasks, mirrored in one another : the «post Kyoto metropolis of 21st century» and the «prospective diagnostic of the Parisian agglomeration». These were the two questions raised by «Designing the future of the Paris agglomeration», an international research and development consultation on the future of metropolitan Paris» launched by the French ministry of culture between June 2008 and March 2009. This consultation was an unprecedented opportunity to approach the issues of the contemporary metropolis with a new eye and to open new directions in the system of its representations. A new perspective on what the contemporary metropolis is - its reality - and what it can be - its potentiality. The metropolitan fact can not be reduced to a unique field of analysis and projection. The work presented here is that of an international multidisciplinary team led by l’AUC and associating architects, urbanists, landscape designers, graphic designers, research labs, historians, geographers, mobility and planning consultants from France, Japan, Switzerland and Belgium. From the transversal approach of our team the notion of «metropolitan climates» gradually emerged, a notion able to grasp the continuum of the metropolis, its commonness, and in the same

time revealing the multitude of its microclimates, of its situations, the everyday of metropolitan being. Discreet Planning We propose no model, plan, nor images of an ideal post Kyoto metropolis or of a Greater Paris of the future. We start from the acknowledgement of the fact that tomorrow’s metropolis is already here, that the ‘metropolitan fact’ is before all a globalized cultural issue and that its interest will rely on the assertion of its multiformness. Recent history of the large cities and metropolises in Europe and in the whole world shows the limits of planning that has become incapable of dealing with more and more intricate and complex realities. Planning remains relevant only if we stop considering it as an answer to all questions and if it applies discontinuously to spaces and activities. This is what we call ‘discreet planning’. The Inherited Metropolis The 21st century post Kyoto metropolis is already here. We are not anymore in an ‘extension’ urbanism but in an urbanism of ‘recycling’. Therefore we must adapt our methods. We must stop seeing things from the plan’s point of view and impose it upon territory. We must start from the ‘real’ and drive it towards the ‘possible’. We must reorientate

Matrix of the post kyoto metropolis of the 21st century (excerpt)

our action from ‘planning’ towards ‘stimulation’ of metropolitan territories. This shift requires new analysis and projection tools. Our ‘timelines’ locate action in time and account for the consubstantiality of territory to political, social, economical, cultural or technical dynamics and trends . With the timelines, we identify recursive or surviving ideas that flow throughout time, threads we can decide to extend or interrupt. History is an extraordinarily rich matter for understanding and conceiving tomorrow’s metropolis. Matrix for a Polyphonic and Polymorphic Metropolis Because the contemporary metropolis is a globalized fact, we must enlarge our vision, open our eyes and minds to other places and situations. We must abandon a purely euro-centered representation of the city. There is no unique response to the post Kyoto issues. The 21st century metropolis must be an open and collective construction. Otherwise it would not be very different from that of preKyoto. In the same way, the Parisian metropolis must free itself from pre-metropolitan representations that keep opposing centre and peripheries. This opposition is completely outdated by the realities of our territory and by the practice of its population

and users. The ‘matrix’ allows us to bypass the inability of the plan to fully grasp the contemporary metropolitan fact. It draws the multiple identity blueprint of the metropolis by assembling all sorts of materials like statistics, society data, cultural productions, narratives... from which emerge the new themes, concepts and categories of an actualized metropolitan thinking and making. Greater Paris Stimulated In order to make Greater Paris a contemporary metropolis l’AUC proposes intensified metropolitan ‘situations’ that stimulate the possibilities of what is already there. Our situations are not localized projects. They are fictional spaces, able to grasp in one same object the micro-scale and detail of everyday situations as well as the strategic territorial scale of the metropolis as a whole.

Situations of the 21st century metropolis We hardly notice it anymore but we live in a space that has been shaped by a succession of society projects, whether they be generous or totalitarian, collective or individualistic, peaceable or bellicose... The contemporary metropolis is an «Ideological Sedimentation». It has a faculty to de-dramatize history, to make it everyday life, to digest it, to make it usable, transformable, infinitely recombinable, to turn it into a perpetual present. Despite its complexity and intrication the 21st century metropolis must be a collective construction. Therefore the «Negotiation Building» has become the only place where effective decision making can happen. Meeting room, assembly or corridor chat... no exit before agreement has been reached. What if the diffused city and its individual housing tracts had become so politically incorrect it would be dropped in favour of the more sustainable compact city? New social and architectural configurations would emerge from this «Subtopian Crisis», a new ecology of individual housing lifestyle where de-specialization of spaces and densification would lead to new solidarities and new proximities. The process of spacing must be reversed. «Metropolitan Network and the Diffuse City». At the point where subtopia meets the cutting through infrastructures, a large train station object pops up. Without transition, this object is the intersection of a neo-rural lifestyle with its lawns, carports, mailboxes, predictable order... and a metropolitan network with its mobility, its intensity, its anonymity, its services, its endless possibilities. «Officehotel» is a creative incubator because it contains everything and because everything can happen within it. It’s à la

carte working style. Flexibility is in choice, not in architecture. Each client finds his own bubble, each room has its function, its ambiance, its world. Bounds are loose and there are no fixed agreements. «Stim». Consider S, a piece of ground left to the state of nature ; it’s dross. Now consider X, Y, Z, three firms that decide to settle on S. Each of them activates its own perimeter, unfolds it’s public image upon it. S becomes public and accessible. Dross becomes stim. Another network, this one private, starts to develop underground. Resulting from the negotiations between X, Y and Z, the underground city spreads its ramifications and its privatized system, dedicated to the creation of value. «Nodal Urbanity» suggests the possibility of contemporary forms of public space, playing with the ambiguity of nature and artefact, interior and exterior. A public space installed at the points where physical and virtual networks connect. A public space of the individual, of free installation, indefinitness, incommunicability as well as hyper-communication. A public space where wifi becomes a construction material. «Hyperbuilding» is the metropolitan object par excellence. Hyperbuilding is not defined, Hyperbuilding defines. It is a machine of actions that lives on everything, sucks everything in. Then it contaminates its surroundings and generates a density so intense it ends up erasing its own form. After having generated the city, Hyperbuilding melts into it.

Situations of contemporary Greater Paris «Greater Great Louvre» (TTGL or Très Très Grand Louvre) envisions a renewed relation to heritage and to action on very big historical structures aiming to turn them into containers of condensed metropolitan life. It is a prototype for a metropolitan meta-collector as well as its own possibility to happen within the parisian substance. It has the ability to combine the ‘invisible metropolis’ subterranean worlds of networks, mass transportation, shopping galleries, with the serenity of its public spaces, architectures and collections. TTGL installs a de-dramatized relation with architectural heritage: its re-appropriation as a container of events rather than ideologies indefinitely spins out its raison d’être, at once making the metropolis visible and perpetually actual. «Psychotherapy of Parisian Substances» shows that the so called ‘historical’ or ‘haussmannian’ Paris is not a matter frozen in time. The Parisian substance is open to all sorts of transformations and combinations for a perpetual actualization process that will never denature its image. It is too late for a 100% compact Greater Paris. The diffuse city, the suburbia that covers more than half of its surface must be acknowledged and taken care of. Action on suburbia means action on its raw material: the individual house itself. «Living Together in Suburbia» proposes 3 singular houses, 3 possibilities to reactivate the individual housing lifestyle by rethinking its internal organization and its relation to the outside world. With «Learning from Tokyo» the erasure of the limits between the spaces of the city and the spaces of public transportation generates an infinity of new metropolitan situations upon territories where accessibility has been kept under activated for decades. Urbanization must be stimulated through

transportation and its potential effects on agglomeration processes and city life around the machines that are the stations and their infrastructures. Learning from Tokyo does not mean reproducing Tokyo within Paris but injecting new relations between the movements of the metropolis and the proliferation of its public spaces, its consumption spaces, its services, its companies, its pleasures. «Stimulation»: certain suburban situations where activity zones, agricultural lands, housing tracts, motorway interchanges... coexist and interpenetrate one another are permanent opportunities to make and remake the metropolitan through endless accumulation of containers and contents. The «Hybrid Cluster» is a place dedicated to the creation of both economical value through the synergies between innovative firms and urban value through the social synergies made possible by its «connexion square» that infiltrates in every interstice of the cluster and spreads deep into the city’s substance. Each firm has its own building, its specific working culture and organisation. Hybrid Cluster is a specific space but it is permeable to the movements of the city. «Parliament of Cultivars and Hybrids»: the parks of tomorrow wil not be the same as the parks of today. They will help us to make sense and reassociate both with nature and with the artificiality in which we are living. «Territory–Object–Density»: there is a need for housing / there is space. The «metropolitan collector» is a large object that connects and stimulates a dense development around itself, on complex territories like post industrial wastelands that are badly accessible at present but potentially very well connected to the metropolitan network.