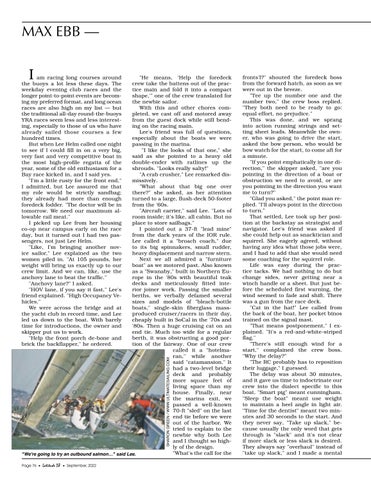 &quot;He means, &#39;Help the foredeck crew take the battens out of the practice main and fold it into a compact shape,&#39;&quot; one of the crew translated for the newbie sailor. With this and other chores completed, we cast off and motored away from the guest dock while still bending on the racing main. Lee&#39;s friend was full of questions, especially about the boats we were passing in the marina. &quot;I like the looks of that one,&quot; she said as she pointed to a heavy old double-ender with ratlines up the shrouds. &quot;Looks really salty!&quot; &quot;A crab crusher,&quot; Lee remarked dismissively. &quot;What about that big one over there?&quot; she asked, as her attention turned to a large, flush-deck 50-footer from the &#39;60s. &quot;Aircraft carrier,&quot; said Lee. &quot;Lots of room inside; it&#39;s like, all cabin. But no place to store sailbags.&quot; I pointed out a 37-ft &quot;lead mine&quot; from the dark years of the IOR rule. Lee called it a &quot;broach coach,&quot; due to its big spinnakers, small rudder, heavy displacement and narrow stern. Next we all admired a &quot;furniture boat&quot; as we motored past. Also known as a &quot;Swanaby,&quot; built in Northern Europe in the &#39;80s with beautiful teak decks and meticulously fitted interior joiner work. Passing the smaller berths, we verbally defamed several sizes and models of &quot;bleach-bottle boats,&quot; single-skin fiberglass massproduced cruiser/racers in their day, cheaply built in SoCal in the &#39;70s and &#39;80s. Then a huge cruising cat on an end tie. Much too wide for a regular berth, it was obstructing a good portion of the fairway. One of our crew called it a &quot;hotelmaran,&quot; while another said &quot;catamansion.&quot; It had a two-level bridge deck and probably more square feet of living space than my house. Finally, near the marina exit, we passed a well-known 70-ft &quot;sled&quot; on the last end tie before we were out of the harbor. We tried to explain to the newbie why both Lee and I thought so highly of the design. &quot;What&#39;s the call for the &quot;We&#39;re going to try an outbound salmon…&quot; said Lee. SHARON GREEN / WWW.ULTIMATESAILING.COM

am racing long courses around the buoys a lot less these days. The weekday evening club races and the longer point-to-point events are becoming my preferred format, and long ocean races are also high on my list — but the traditional all-day round-the-buoys YRA races seem less and less interesting, especially to those of us who have already sailed those courses a few hundred times. But when Lee Helm called one night to see if I could fill in on a very big, very fast and very competitive boat in the most high-profile regatta of the year, some of the old enthusiasm for a Bay race kicked in, and I said yes. &quot;I&#39;m a little rusty for the front end,&quot; I admitted, but Lee assured me that my role would be strictly sandbag; they already had more than enough foredeck fodder. &quot;The doctor will be in tomorrow. We need our maximum allowable rail meat.&quot; I picked up Lee from her housing co-op near campus early on the race day, but it turned out I had two passengers, not just Lee Helm. &quot;Like, I&#39;m bringing another novice sailor,&quot; Lee explained as the two women piled in. &quot;At 105 pounds, her weight will bring us exactly up to our crew limit. And we can, like, use the anchovy lane to beat the traffic.&quot; &quot;Anchovy lane?&quot; I asked. &quot;HOV lane, if you say it fast,&quot; Lee&#39;s friend explained. &quot;High Occupancy Vehicles.&quot; We were across the bridge and at the yacht club in record time, and Lee led us down to the boat. With barely time for introductions, the owner and skipper put us to work. &quot;Help the front porch de-bone and brick the backflapper,&quot; he ordered.

fronts&#39;l?&quot; shouted the foredeck boss from the forward hatch, as soon as we were out in the breeze. &quot;Tee up the number one and the number two,&quot; the crew boss replied. &quot;They both need to be ready to go: equal effort, no prejudice.&quot; This was done, and we sprang into action running strings and setting sheet leads. Meanwhile the owner, who was going to drive the start, asked the bow person, who would be bow watch for the start, to come aft for a minute. &quot;If you point emphatically in one direction,&quot; the skipper asked, &quot;are you pointing in the direction of a boat or obstruction we need to avoid, or are you pointing in the direction you want me to turn?&quot; &quot;Glad you asked,&quot; the point man replied. &quot;I&#39;ll always point in the direction to turn.&quot; That settled, Lee took up her position at the backstay as strategist and navigator. Lee&#39;s friend was asked if she could help out as snacktician and squirrel. She eagerly agreed, without having any idea what those jobs were, and I had to add that she would need some coaching for the squirrel role. Life was easy during the practice tacks. We had nothing to do but change sides, never getting near a winch handle or a sheet. But just before the scheduled first warning, the wind seemed to fade and shift. There was a gun from the race deck. &quot;Cat in the hat!&quot; Lee called from the back of the boat, her pocket binos trained on the signal mast. &quot;That means postponement,&quot; I explained. &quot;It&#39;s a red-and-white-striped flag.&quot; &quot;There&#39;s still enough wind for a start,&quot; complained the crew boss. &quot;Why the delay?&quot; &quot;The RC probably has to reposition their luggage,&quot; I guessed. The delay was about 30 minutes, and it gave us time to indoctrinate our crew into the dialect specific to this boat. &quot;Smart pig&quot; meant cunningham. &quot;Sleep the boat&quot; meant use weight to maintain a heel angle in light air. &quot;Time for the dentist&quot; meant two minutes and 30 seconds to the start. And they never say, &quot;Take up slack,&quot; because usually the only word that gets through is &quot;slack&quot; and it&#39;s not clear if more slack or less slack is desired. They always say &quot;overhaul&quot; instead of &quot;take up slack,&quot; and I made a mental