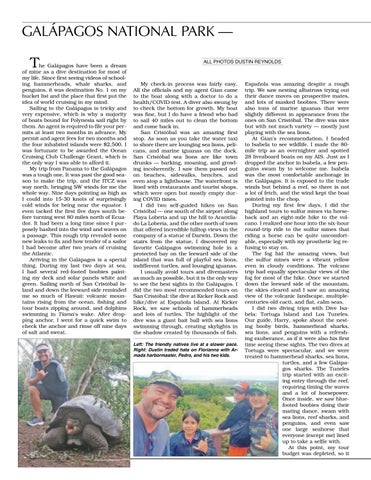 he Galápagos have been a dream of mine as a dive destination for most of my life. Since first seeing videos of schooling hammerheads, whale sharks, and penguins, it was destination No. 1 on my bucket list and the place that first put the idea of world cruising in my mind. Sailing to the Galápagos is tricky and very expensive, which is why a majority of boats bound for Polynesia sail right by them. An agent is required to file your permits at least two months in advance. My permit and agent fees for two months and the four inhabited islands were $2,500. I was fortunate to be awarded the Ocean Cruising Club Challenge Grant, which is the only way I was able to afford it. My trip from Panama to the Galápagos was a tough one. It was past the good season to make the trip, and the ITCZ was way north, bringing SW winds for me the whole way. Nine days pointing as high as I could into 15-30 knots of surprisingly cold winds for being near the equator. I even tacked the first five days south before turning west 80 miles north of Ecuador. It had been a long time since I purposely bashed into the wind and waves on a passage. This rough trip revealed some new leaks to fix and how tender of a sailor I had become after two years of cruising the Atlantic. Arriving in the Galápagos is a special thing. During my last two days at sea, I had several red-footed boobies painting my deck and solar panels white and green. Sailing north of San Cristóbal Island and down the leeward side reminded me so much of Hawaii: volcanic mountains rising from the ocean, fishing and tour boats zipping around, and dolphins swimming in Tiama&#39;s wake. After dropping anchor, I went for a quick swim to check the anchor and rinse off nine days of salt and sweat.

My check-in process was fairly easy. All the officials and my agent Gian came to the boat along with a doctor to do a health/COVID test. A diver also swung by to check the bottom for growth. My boat was fine, but I do have a friend who had to sail 40 miles out to clean the bottom and come back in. San Cristóbal was an amazing first stop. As soon as you take the water taxi to shore there are lounging sea lions, pelicans, and marine iguanas on the dock. San Cristóbal sea lions are like town drunks — barking, moaning, and growling incoherently. I saw them passed out on beaches, sidewalks, benches, and even atop a lighthouse. The waterfront is lined with restaurants and tourist shops, which were open but mostly empty during COVID times. I did two self-guided hikes on San Cristóbal — one south of the airport along Playa Loberia and up the hill to Acantilado La Loberia, and the other north of town that offered incredible hilltop views in the company of a statue of Darwin. Down the stairs from the statue, I discovered my favorite Galápagos swimming hole in a protected bay on the leeward side of the island that was full of playful sea lions, indifferent turtles, and lounging iguanas. I usually avoid tours and divemasters as much as possible, but it is the only way to see the best sights in the Galápagos. I did the two most recommended tours on San Cristóbal: the dive at Kicker Rock and hike/dive at Española Island. At Kicker Rock, we saw schools of hammerheads and lots of turtles. The highlight of the dive was a giant bait ball with sea lions swimming through, creating skylights in the shadow created by thousands of fish. Left: The friendly natives live at a slower pace. Right: Dustin traded hats on Florianna with Armada harbormaster, Pedro, and his two kids.

Española was amazing despite a rough trip. We saw nesting albatross trying out their dance moves on prospective mates, and lots of masked boobies. There were also tons of marine iguanas that were slightly different in appearance from the ones on San Cristóbal. The dive was nice but with not much variety — mostly just playing with the sea lions. At Gian&#39;s recommendation, I headed to Isabela to see wildlife. I made the 80mile trip as an overnighter and spotted 28 liveaboard boats on my AIS. Just as I dropped the anchor in Isabela, a few penguins swam by to welcome me. Isabela was the most comfortable anchorage in the Galápagos. It is exposed to the trade winds but behind a reef, so there is not a lot of fetch, and the wind kept the boat pointed into the chop. During my first few days, I did the highland tours to sulfur mines via horseback and an eight-mile hike to the volcano. I realized one hour into the six-hour round-trip ride to the sulfur mines that riding a horse can be quite uncomfortable, especially with my prosthetic leg refusing to stay on. The fog hid the amazing views, but the sulfur mines were a vibrant yellow even in cloudy conditions. The volcano trip had equally spectacular views of the fog for most of the hike. Once we started down the leeward side of the mountain, the skies cleared and I saw an amazing view of the volcanic landscape, multiplecenturies-old cacti, and flat, calm seas. I did two diving trips with Dive Isabela: Tortuga Island and Los Tuneles. Our guide, Harry, spoke about the nesting booby birds, hammerhead sharks, sea lions, and penguins with a refreshing exuberance, as if it were also his first time seeing these sights. The two dives at Tortuga were spectacular, and we were treated to hammerhead sharks, sea lions, turtles, and a few Galápagos sharks. The Tuneles trip started with an exciting entry through the reef, requiring timing the waves and a lot of horsepower. Once inside, we saw bluefooted boobies doing their mating dance, swam with sea lions, reef sharks, and penguins, and even saw one large seahorse that everyone (except me) lined up to take a selfie with. At this point, my tour budget was depleted, so it