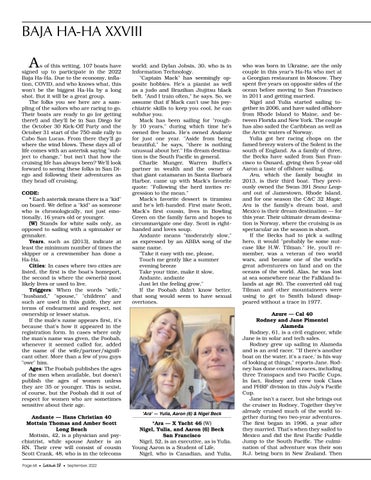 s of this writing, 107 boats have signed up to participate in the 2022 Baja Ha-Ha. Due to the economy, inflation, COVID, and who knows what, this won&#39;t be the biggest Ha-Ha by a long shot. But it will be a great group. The folks you see here are a sampling of the sailors who are raring to go. Their boats are ready to go (or getting there!) and they&#39;ll be in San Diego for the October 30 Kick-Off Party and the October 31 start of the 750-mile rally to Cabo San Lucas. From there they&#39;ll go where the wind blows. These days all of life comes with an asterisk saying &quot;subject to change,&quot; but isn&#39;t that how the cruising life has always been? We&#39;ll look forward to seeing these folks in San Diego and following their adventures as they head off cruising. CODE: * Each asterisk means there is a &quot;kid&quot; on board. We define a &quot;kid&quot; as someone who is chronologically, not just emotionally, 16 years old or younger. (W) Stands for white sails only, as opposed to sailing with a spinnaker or gennaker. Years, such as (2013), indicate at least the minimum number of times the skipper or a crewmember has done a Ha-Ha. Cities: In cases where two cities are listed, the first is the boat&#39;s homeport, the second is where the owner(s) most likely lives or used to live. Triggers: When the words &quot;wife,&quot; &quot;husband,&quot; &quot;spouse,&quot; &quot;children&quot; and such are used in this guide, they are terms of endearment and respect, not ownership or lesser status. If the male&#39;s name appears first, it&#39;s because that&#39;s how it appeared in the registration form. In cases where only the man&#39;s name was given, the Poobah, whenever it seemed called for, added the name of the wife/partner/significant other. More than a few of you guys &quot;owe&quot; him. Ages: The Poobah publishes the ages of the men when available, but doesn&#39;t publish the ages of women unless they are 35 or younger. This is sexist, of course, but the Poobah did it out of respect for women who are sometimes sensitive about their age. Andante — Hans Christian 40 Mottsin Thomas and Amber Scott Long Beach Mottsin, 42, is a physician and psychiatrist, while spouse Amber is an RN. Their crew will consist of cousin Scott Crank, 48, who is in the telecoms 0AGE s

world; and Dylan Jobsis, 30, who is in Information Technology. &quot;Captain Mack&quot; has seemingly opposite hobbies. He&#39;s a pianist as well as a judo and Brazilian Jiujitsu black belt. &quot;And I train often,&quot; he says. So, we assume that if Mack can&#39;t use his psychiatric skills to keep you cool, he can subdue you. Mack has been sailing for &quot;roughly 10 years,&quot; during which time he&#39;s owned five boats. He&#39;s owned Andante for just one year. &quot;Aside from being beautiful,&quot; he says, &quot;there is nothing unusual about her.&quot; His dream destination is the South Pacific in general. Charlie Munger, Warren Buffet&#39;s partner in wealth and the owner of that giant catamaran in Santa Barbara Harbor, came up with Mack&#39;s favorite quote: &quot;Following the herd invites regression to the mean.&quot; Mack&#39;s favorite dessert is tiramisu and he&#39;s left-handed. First mate Scott, Mack&#39;s first cousin, lives in Bowling Green on the family farm and hopes to circumnavigate one day. Scott is righthanded and loves soup. Andante means &quot;moderately slow,&quot; as expressed by an ABBA song of the same name. &quot;Take it easy with me, please, Touch me gently like a summer evening breeze Take your time, make it slow, Andante, andante Just let the feeling grow.&quot; If the Poobah didn&#39;t know better, that song would seem to have sexual overtones.

who was born in Ukraine, are the only couple in this year&#39;s Ha-Ha who met at a Georgian restaurant in Moscow. They spent five years on opposite sides of the ocean before moving to San Francisco in 2011 and getting married. Nigel and Yulia started sailing together in 2006, and have sailed offshore from Rhode Island to Maine, and between Florida and New York. The couple has also sailed the Caribbean as well as the Arctic waters of Norway. Yulia got her racing chops on the famed breezy waters of the Solent in the south of England. As a family of three, the Becks have sailed from San Francisco to Oxnard, giving then 5-year-old Aaron a taste of offshore sailing. Ara, which the family bought in 2013, is their third boat. They previously owned the Swan 391 Snow Leopard out of Jamestown, Rhode Island, and for one season the C&amp;C 32 Magic. Ara is the family&#39;s dream boat, and Mexico is their dream destination — for this year. Their ultimate dream destination is Norway, where the cruising is as spectacular as the season is short. If the Becks had to pick a sailing hero, it would &quot;probably be some nutcase like H.W. Tilman.&quot; He, you&#39;ll remember, was a veteran of two world wars, and became one of the world&#39;s great adventurers on land and on the oceans of the world. Alas, he was lost at sea somewhere near the Falkland Islands at age 80. The converted old tug Tilman and other mountaineers were using to get to Smith Island disappeared without a trace in 1977. Azure — Cal 40 Rodney and Jane Pimentel Alameda Rodney, 61, is a civil engineer, while Jane is in solar and tech sales. Rodney grew up sailing in Alameda and is an avid racer. &quot;&#39;If there&#39;s another boat on the water, it&#39;s a race,&#39; is his way of looking at things,&quot; reports Jane. Rodney has done countless races, including three Transpacs and two Pacific Cups. In fact, Rodney and crew took Class and PHRF division in this July&#39;s Pacific Cup. Jane isn&#39;t a racer, but she brings out the cruiser in Rodney. Together they&#39;ve already cruised much of the world together during two two-year adventures. The first began in 1996, a year after they married. That&#39;s when they sailed to Mexico and did the first Pacific Puddle Jump to the South Pacific. The culmination of that adventure was their son R.J. being born in New Zealand. Then