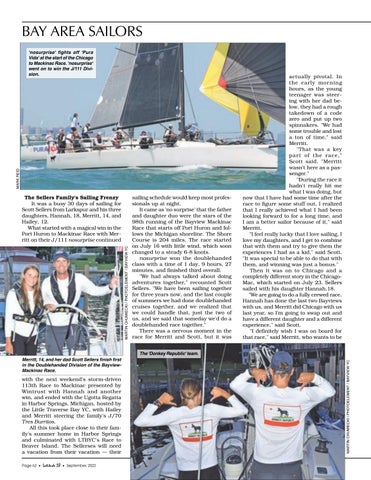 The Sellers Family&#39;s Sailing Frenzy It was a busy 30 days of sailing for Scott Sellers from Larkspur and his three daughters, Hannah, 18, Merritt, 14, and Hailey, 12. What started with a magical win in the Port Huron to Mackinac Race with Merritt on their J/111 nosurprise continued

sailing schedule would keep most professionals up at night. It came as &#39;no surprise&#39; that the father and daughter duo were the stars of the 98th running of the Bayview Mackinac Race that starts off Port Huron and follows the Michigan shoreline. The Shore Course is 204 miles. The race started on July 16 with little wind, which soon changed to a steady 6-8 knots. nosurprise won the doublehanded class with a time of 1 day, 9 hours, 27 minutes, and finished third overall. &quot;We had always talked about doing adventures together,&quot; recounted Scott Sellers. &quot;We have been sailing together for three years now, and the last couple of summers we had done doublehanded cruises together, and we realized that we could handle that, just the two of us, and we said that someday we&#39;d do a doublehanded race together.&quot; There was a nervous moment in the race for Merritt and Scott, but it was

actually pivotal. In the early mor ning hours, as the young teenager was steering with her dad below, they had a rough takedown of a code zero and put up two spinnakers. &quot;We had some trouble and lost a ton of time,&quot; said Merritt. &quot;That was a key part of the race,&quot; Scott said. &quot;Merritt wasn&#39;t here as a passenger.&quot; &quot;During the race it hadn&#39;t really hit me what I was doing, but now that I have had some time after the race to figure some stuff out, I realized that I really achieved what I had been looking forward to for a long time, and I am a better sailor because of it,&quot; said Merritt. &quot;I feel really lucky that I love sailing, I love my daughters, and I get to combine that with them and try to give them the experiences I had as a kid,&quot; said Scott. &quot;It was special to be able to do that with them, and winning was just a bonus.&quot; Then it was on to Chicago and a completely different story in the ChicagoMac, which started on July 23. Sellers sailed with his daughter Hannah,18. &quot;We are going to do a fully crewed race. Hannah has done the last two Bayviews with us, and Merritt did Chicago with us last year, so I&#39;m going to swap out and have a different daughter and a different experience,&quot; said Scott. &quot;I definitely wish I was on board for that race,&quot; said Merritt, who wants to be

with the next weekend&#39;s storm-driven 113th Race to Mackinac presented by Wintrust with Hannah and another win, and ended with the Ugotta Regatta in Harbor Springs, Michigan, hosted by the Little Traverse Bay YC, with Hailey and Merritt steering the family&#39;s J/70 Tres Burritos. All this took place close to their family&#39;s summer home in Harbor Springs and culminated with LTBYC&#39;s Race to Beaver Island. The Sellerses will need a vacation from their vacation — their 0AGE s

The &#39;Donkey Republic&#39; team. erritt, , and her dad cott ellers finish first in the Doublehanded Division of the BayviewMackinac Race.