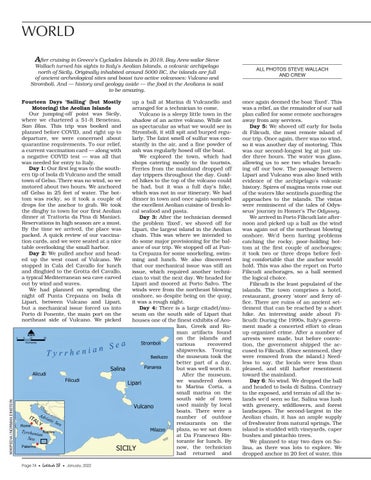 Wallach turned his sights to Italy&#39;s Aeolian Islands, a volcanic archipelago north of Sicily. Originally inhabited around 5000 BC, the islands are full of ancient archeological sites and boast two active volcanoes: Vulcano and Stromboli. And — history and geology aside — the food in the Aeolians is said to be amazing.

Fourteen Days &#39;Sailing&#39; (but Mostly Motoring) the Aeolian Islands Our jumping-off point was Sicily, where we chartered a 51-ft Beneteau, San Blas. This trip was booked and planned before COVID, and right up to departure, we were concerned about quarantine requirements. To our relief, a current vaccination card — along with a negative COVID test — was all that was needed for entry to Italy. Day 1: Our first leg was to the southern tip of Isola di Vulcano and the small town of Gelso. There was no wind, so we motored about two hours. We anchored off Gelso in 25 feet of water. The bottom was rocky, so it took a couple of drops for the anchor to grab. We took the dinghy to town for our first Aeolian dinner at Trattoria da Pina di Maniaci. Reservations in high season are a must. By the time we arrived, the place was packed. A quick review of our vaccination cards, and we were seated at a nice table overlooking the small harbor. Day 2: We pulled anchor and headed up the west coast of Vulcano. We stopped in Cala del Cavallo for lunch and dinghied to the Grotta del Cavallo, a typical Mediterranean sea cave carved out by wind and waves. We had planned on spending the night off Punta Crepazza on Isola di Lipari, between Vulcano and Lipari, but a mechanical issue forced us into Porto di Ponente, the main port on the northeast side of Vulcano. We picked

up a ball at Marina di Vulcanello and arranged for a technician to come. Vulcano is a sleepy little town in the shadow of an active volcano. While not as spectacular as what we would see in Stromboli, it still spit and burped regularly. The faint smell of sulfur was constantly in the air, and a fine powder of ash was regularly hosed off the boat. We explored the town, which had shops catering mostly to the tourists. Ferries from the mainland dropped off day trippers throughout the day. Guided hikes to the top of the volcano could be had, but it was a full day&#39;s hike, which was not in our itinerary. We had dinner in town and once again sampled the excellent Aeolian cuisine of fresh local seafood and pasta. Day 3: After the technician deemed the problem &#39;fixed&#39;, we shoved off for Lipari, the largest island in the Aeolian chain. This was where we intended to do some major provisioning for the balance of our trip. We stopped off at Punta Crepazza for some snorkeling, swimming and lunch. We also discovered that our mechanical issue was still an issue, which required another technician to visit the next day. We headed for Lipari and moored at Porto Salvo. The winds were from the northeast blowing onshore, so despite being on the quay, it was a rough night. Day 4: There is a large citadel/museum on the south side of Lipari that houses one of the finest exhibits of Aeolian, Greek and Roman artifacts found on the islands and various recovered shipwrecks. Touring the museum took the better part of a day, but was well worth it. After the museum, we wandered down to Marina Corta, a small marina on the south side of town used mainly by local boats. There were a number of outdoor restaurants on the plaza, so we sat down at Da Francesco Ristorante for lunch. By now, the technician had returned and

ALL PHOTOS STEVE WALLACH AND CREW

once again deemed the boat &#39;fixed&#39;. This was a relief, as the remainder of our sail plan called for some remote anchorages away from any services. Day 5: We shoved off early for Isola di Filicudi, the most remote island of our trip. Once again, there was no wind, so it was another day of motoring. This was our second-longest leg at just under three hours. The water was glass, allowing us to see two whales breaching off our bow. The passage between Lipari and Vulcano was also lined with evidence of the archipelago&#39;s volcanic history. Spires of magma vents rose out of the waters like sentinels guarding the approaches to the islands. The vistas were reminiscent of the tales of Odysseus&#39; journey in Homer&#39;s The Odyssey. We arrived in Porto Filicudi late afternoon and picked up a ball as the wind was again out of the northeast blowing onshore. We&#39;d been having problems catching the rocky, poor-holding bottom at the first couple of anchorages; it took two or three drops before feeling comfortable that the anchor would hold. This was also the report on Porto Filicudi anchorages, so a ball seemed the logical choice. Filicudi is the least populated of the islands. The town comprises a hotel, restaurant, grocery &#39;store&#39; and ferry office. There are ruins of an ancient settlement that can be reached by a short hike. An interesting aside about Filicudi: During the 1990s, Italy&#39;s government made a concerted effort to clean up organized crime. After a number of arrests were made, but before conviction, the government shipped the accused to Filicudi. (Once sentenced, they were removed from the island.) Needless to say, the locals were less than pleased, and still harbor resentment toward the mainland. Day 6: No wind. We dropped the ball and headed to Isola di Salina. Contrary to the exposed, arid terrain of all the islands we&#39;d seen so far, Salina was lush with greenery, wildflowers, and forest landscapes. The second-largest in the Aeolian chain, it has an ample supply of freshwater from natural springs. The island is studded with vineyards, caper bushes and pistachio trees. We planned to stay two days on Salina, as there was lots to explore. We dropped anchor in 20 feet of water, this