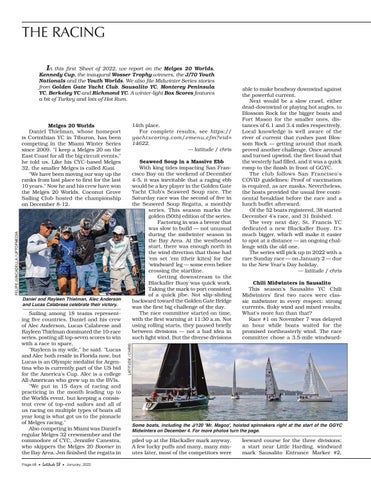 THE RACING In this first &#39;Sheet of 2022, we report on the Melges 20 Worlds, Kennedy Cup, the inaugural Wosser Trophy winners, the J/70 Youth Nationals and the Youth Worlds. We also file Midwinter Series stories from Golden Gate Yacht Club, Sausalito YC, Monterey Peninsula YC, Berkeley YC and Richmond YC. A winter-light Box Scores features a bit of Turkey and lots of Hot Rum.

Melges 20 Worlds Daniel Thielman, whose homeport is Corinthian YC in Tiburon, has been competing in the Miami Winter Series since 2009. &quot;I keep a Melges 20 on the East Coast for all the big circuit events,&quot; he told us. Like his CYC-based Melges 32, the smaller Melges is called Kuai. &quot;We have been moving our way up the ranks from last place to first for the last 10 years.&quot; Now he and his crew have won the Melges 20 Worlds. Coconut Grove Sailing Club hosted the championship on December 8-12.

Seaweed Soup in a Massive Ebb With king tides impacting San Francisco Bay on the weekend of December 4-5, it was inevitable that a raging ebb would be a key player in the Golden Gate Yacht Club&#39;s Seaweed Soup race. The Saturday race was the second of five in the Seaweed Soup Regatta, a monthly series. This season marks the golden (50th) edition of the series. Factoring in was a breeze that was slow to build — not unusual during the midwinter season in the Bay Area. At the westbound start, there was enough north in the wind direction that those had &#39;em set &#39;em (their kites) for the &#39;windward&#39; leg — some even before crossing the startline. Getting downstream to the Blackaller Buoy was quick work. Taking the mark to port consisted of a quick jibe. Not slip-sliding backward toward the Golden Gate Bridge was the first big challenge of the day. The race committee started on time, with the first warning at 11:30 a.m. Not using rolling starts, they paused briefly between divisions — not a bad idea in such light wind. But the diverse divisions

Sailing among 18 teams representing five countries, Daniel and his crew of Alec Anderson, Lucas Calabrese and Rayleen Thielman dominated the 10-race series, posting all top-seven scores to win with a race to spare. &quot;Rayleen is my wife,&quot; he said. &quot;Lucas and Alec both reside in Florida now, but Lucas is an Olympic medalist for Argentina who is currently part of the US bid for the America&#39;s Cup. Alec is a college All-American who grew up in the BVIs. &quot;We put in 15 days of racing and practicing in the month leading up to the Worlds event, but keeping a consistent crew of top-end sailors and all of us racing on multiple types of boats all year long is what got us to the pinnacle of Melges racing.&quot; Also competing in Miami was Daniel&#39;s regular Melges 32 crewmember and the commodore of CYC, Jennifer Canestra, who skippers the Melges 20 Boomer in the Bay Area. Jen finished the regatta in 0AGE s Latitude

Chili Midwinters in Sausalito This season&#39;s Sausalito YC Chili Midwinters&#39; first two races were classic midwinter in every respect: strong currents, fluky wind and mixed results. What&#39;s more fun than that? Race #1 on November 7 was delayed an hour while boats waited for the promised northeasterly wind. The race committee chose a 3.5-mile windward-

able to make headway downwind against the powerful current. Next would be a slow crawl, either dead-downwind or playing hot angles, to Blossom Rock for the bigger boats and Fort Mason for the smaller ones, distances of 6.1 and 3.4 miles respectively. Local knowledge is well aware of the river of current that rushes past Blossom Rock — getting around that mark proved another challenge. Once around and turned upwind, the fleet found that the westerly had filled, and it was a quick romp to the finish in front of GGYC. The club follows San Francisco&#39;s COVID guidelines: Proof of vaccination is required, as are masks. Nevertheless, the hosts provided the usual free continental breakfast before the race and a lunch buffet afterward. Of the 52 boats registered, 38 started December 4&#39;s race, and 31 finished. The very next day, St. Francis YC dedicated a new Blackaller Buoy. It&#39;s much bigger, which will make it easier to spot at a distance — an ongoing challenge with the old one. The series will pick up in 2022 with a rare Sunday race — on January 2 — due to the New Year&#39;s Day holiday. — latitude / chris

Some boats, including the J/120 &#39;Mr. Magoo&#39;, hoisted spinnakers right at the start of the GGYC Midwinters on December 4. For more photos turn the page.

piled up at the Blackaller mark anyway. A few lucky puffs and many, many minutes later, most of the competitors were