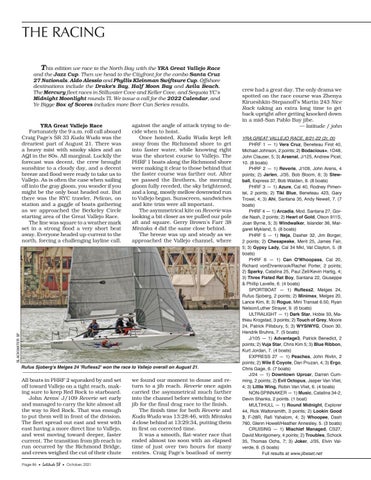 THE RACING This edition we race to the North Bay with the YRA Great Vallejo Race and the Jazz Cup. Then we head to the Cityfront for the combo Santa Cruz 27 Nationals, Aldo Alessio and Phyllis Kleinman Swiftsure Cup. Offshore destinations include the Drake's Bay, Half Moon Bay and Avila Beach. The Mercury fleet races in Stillwater Cove and Keller Cove, and Sequoia YC's Midnight Moonlight rounds TI. We issue a call for the 2022 Calendar, and Ye Bigge Box of Scores includes more Beer Can Series results. against the angle of attack trying to decide when to hoist. Once hoisted, Kuda Wuda kept left away from the Richmond shore to get into faster water, while knowing right was the shortest course to Vallejo. The PHRF 1 boats along the Richmond shore were making it clear to those behind that the faster course was farther out. After we passed the Brothers, the morning gloom fully receded, the sky brightened, and a long, mostly mellow downwind run to Vallejo began. Sunscreen, sandwiches and kite trim were all important. The asymmetrical kite on Reverie was looking a bit closer as we pulled our pole aft and square. Gerry Brown's Farr 38 Mintaka 4 did the same close behind. The breeze was up and steady as we approached the Vallejo channel, where

YRA Great Vallejo Race Fortunately the 9 a.m. roll call aboard Craig Page's SR 33 Kuda Wuda was the dreariest part of August 21. There was a heavy mist with smoky skies and an AQI in the 80s. All marginal. Luckily the forecast was decent, the crew brought sunshine to a cloudy day, and a decent breeze and flood were ready to take us to Vallejo. As is often the case when sailing off into the gray gloom, you wonder if you might be the only boat headed out. But there was the RYC trawler, Pelican, on station and a gaggle of boats gathering as we approached the Berkeley Circle starting area of the Great Vallejo Race. The line was square to a weather mark set in a strong flood a very short beat away. Everyone headed up-current to the north, forcing a challenging layline call.

All boats in PHRF 2 squeaked by and set off toward Vallejo on a tight reach, making sure to keep Red Rock to starboard. John Arens' J/109 Reverie set early and managed to carry the kite almost all the way to Red Rock. That was enough to put them well in front of the division. The fleet spread out east and west with east having a more direct line to Vallejo, and west moving toward deeper, faster current. The transition from jib reach to run occurred by the Richmond Bridge, and crews weighed the cut of their chute 0AGEs