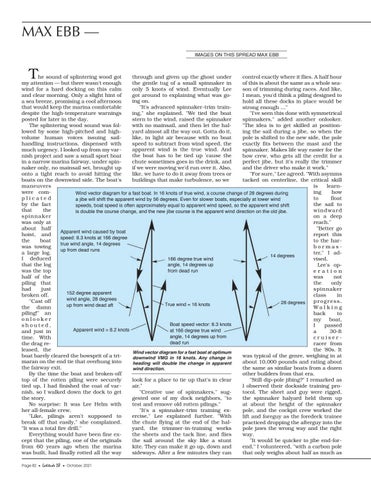 through and given up the ghost under he sound of splintering wood got control exactly where it flies. A half hour the gentle tug of a small spinnaker in my attention — but there wasn't enough of this is about the same as a whole seaonly 5 knots of wind. Eventually Lee wind for a hard docking on this calm son of trimming during races. And like, got around to explaining what was goand clear morning. Only a slight hint of I mean, you'd think a piling designed to ing on. a sea breeze, promising a cool afternoon hold all these docks in place would be "It's advanced spinnaker-trim trainthat would keep the marina comfortable strong enough …" ing," she explained. "We tied the boat despite the high-temperature warnings "I've seen this done with symmetrical stern to the wind, raised the spinnaker posted for later in the day. spinnakers," added another onlooker. with no mainsail, and then let the halThe splintering wood sound was fol"The idea is to get skilled at positionyard almost all the way out. Gotta do it, lowed by some high-pitched and highing the sail during a jibe, so when the like, in light air because with no boat volume human voices issuing sailpole is shifted to the new side, the pole speed to subtract from wind speed, the handling instructions, dispensed with exactly fits between the mast and the apparent wind is the true wind. And much urgency. I looked up from my varspinnaker. Makes life way easier for the the boat has to be tied up 'cause the nish project and saw a small sport boat bow crew, who gets all the credit for a chute sometimes goes in the drink, and in a narrow marina fairway, under spinperfect jibe, but it's really the trimmer if we were moving we'd run over it. Also, naker only, no mainsail set, brought up and the driver who make it work." like, we have to do it away from trees or onto a tight reach to avoid hitting the "For sure," Lee agreed. "With asymms buildings that make turbulence, so we boats on the downwind side. The boat's tacked on centerline, the critical skill maneuvers is learnwere coming how Wind vector diagram for a fast boat. In 16 knots of true wind, a course change of 28 degrees during plicated to float a jibe will shift the apparent wind by 56 degrees. Even for slower boats, especially at lower wind by the fact the sail to speeds, boat speed is often approximately equal to apparent wind speed, so the apparent wind shift that the windward is double the course change, and the new jibe course is the apparent wind direction on the old jibe. spinnaker on a deep was only at reach." about half "Better go Apparent wind caused by boat hoist, and report this speed: 8.3 knots at 166 degree the boat to the hartrue wind angle, 14 degrees was towing bormasup from dead runs a large log. ter," I ad14 degrees I deduced 166 degree true wind vised. that the log angle, 14 degrees up Lee's opwas the top from dead run eration half of the was not piling that the only had just spinnaker 152 degree apparent broken off. class in wind angle, 28 degrees "Cast off progress. 28 degrees True wind = 16 knots up from wind dead aft the damn Wa l k i n g piling!" an back to onlooker my boat, Boat speed vector: 8.3 knots shouted, I passed Apparent wind = 8.2 knots at 166 degree true wind and just in a 30-ft angle, 14 degrees up from time. With cruiser dead run the drag reracer from leased, the the '80s. It Wind vector diagram for a fast boat at optimum boat barely cleared the bowsprit of a triwas typical of the genre, weighing in at downwind VMG in 16 knots. Any change in maran on the end tie that overhung into about 10,000 pounds and rating about heading will double the change in apparent the fairway exit. the same as similar boats from a dozen wind direction. By the time the boat and broken-off other builders from that era. top of the rotten piling were securely look for a place to tie up that's in clear "Still dip-pole jibing?" I remarked as tied up, I had finished the coat of varair." I observed their dockside training pronish, so I walked down the dock to get "Creative use of spinnakers," sugtocol. The sheet and guy were rigged, the story. gested one of my dock neighbors, "to the spinnaker halyard held them up No surprise: It was Lee Helm with test and remove old rotten pilings." at about the height of the spinnaker her all-female crew. "It's a spinnaker-trim training expole, and the cockpit crew worked the "Like, pilings aren't supposed to ercise," Lee explained further. "With lift and foreguy as the foredeck trainee break off that easily," she complained. the chute flying at the end of the halpracticed dropping the afterguy into the "It was a total fire drill." yard, the trimmer-in-training works pole jaws the wrong way and the right Everything would have been fine exthe sheets and the tack line, and flies way. cept that the piling, one of the originals the sail around the sky like a stunt "It would be quicker to jibe end-forfrom 60 years ago when the marina kite. They can make it go up, down and end," I volunteered, "with a carbon pole was built, had finally rotted all the way sideways. After a few minutes they can that only weighs about half as much as 0AGEs