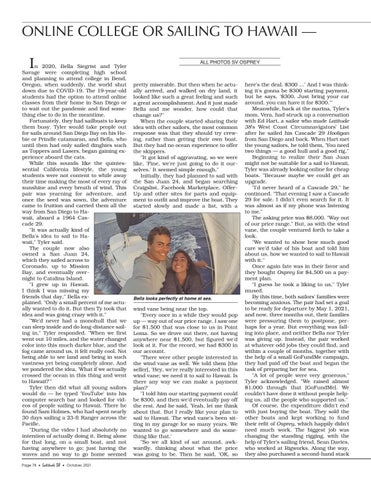 ONLINE COLLEGE OR SAILING TO HAWAII — I

n 2020, Bella Siegrist and Tyler Savage were completing high school and planning to attend college in Bend, Oregon, when suddenly, the world shut down due to COVID-19. The 19-year-old students had the option to attend online classes from their home in San Diego or to wait out the pandemic and find something else to do in the meantime. Fortunately, they had sailboats to keep them busy. Tyler would take people out for sails around San Diego Bay on his Hobie or Prindle catamaran, and Bella, who until then had only sailed dinghies such as Toppers and Lasers, began gaining experience aboard the cats. While this sounds like the quintessential California lifestyle, the young students were not content to while away their time making the most of every ray of sunshine and every breath of wind. This pair was yearning for adventure, and once the seed was sown, the adventure came to fruition and carried them all the way from San Diego to Hawaii, aboard a 1964 Cascade 29. "It was actually kind of Bella's idea to sail to Hawaii," Tyler said. The couple now also owned a San Juan 24, which they sailed across to Coronado, up to Mission Bay, and eventually overnight to Catalina Island. "I grew up in Hawaii. I think I was missing my friends that day," Bella explained. "Only a small percent of me actually wanted to do it. But then Ty took that idea and was going crazy with it." "We'd never had a monohull that we can sleep inside and do long-distance sailing in," Tyler responded. "When we first went out 10 miles, and the water changed color into this much darker blue, and the fog came around us, it felt really cool. Not being able to see land and being in such vastness yet being completely alone. And we pondered the idea, 'What if we actually crossed the ocean in this thing and went to Hawaii?'" Tyler then did what all young sailors would do — he typed 'YouTube' into his computer search bar and looked for videos of people sailing to Hawaii. There he found Sam Holmes, who had spent nearly 30 days sailing a 23-ft Ranger across the Pacific. "During the video I had absolutely no intention of actually doing it. Being alone for that long, on a small boat, and not having anywhere to go; just having the waves and no way to go home seemed 0AGEs