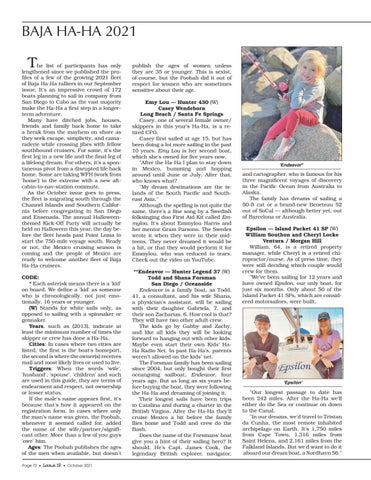 he list of participants has only lengthened since we published the profiles of a few of the growing 2021 fleet of Baja Ha-Ha ralliers in our September issue. It's an impressive crowd of 172 boats planning to sail in company from San Diego to Cabo as the vast majority make the Ha-Ha a first step in a longerterm adventure. Many have ditched jobs, houses, friends and family back home to take a break from the mayhem on shore as they seek escape, simplicity, and camaraderie while crossing jibes with fellow southbound cruisers. For some, it's the first leg in a new life and the final leg of a lifelong dream. For others, it's a spontaneous pivot from a disrupted life back home. Some are taking WFH (work from 'home') to the extreme with a new aftcabin-to-nav-station commute. As the October issue goes to press, the fleet is migrating south through the Channel Islands and Southern California before congregating in San Diego and Ensenada. The annual Halloweenthemed Kick-Off Party will actually be held on Halloween this year, the day before the fleet heads past Point Loma to start the 750-mile voyage south. Ready or not, the Mexico cruising season is coming and the people of Mexico are ready to welcome another fleet of Baja Ha-Ha cruisers. CODE: * Each asterisk means there is a 'kid' on board. We define a 'kid' as someone who is chronologically, not just emotionally, 16 years or younger. (W) Stands for white sails only, as opposed to sailing with a spinnaker or gennaker. Years, such as (2013), indicate at least the minimum number of times the skipper or crew has done a Ha-Ha. Cities: In cases where two cities are listed, the first is the boat's homeport, the second is where the owner(s) receives mail and most likely lives or used to live. Triggers: When the words 'wife', 'husband', 'spouse', 'children' and such are used in this guide, they are terms of endearment and respect, not ownership or lesser status. If the male's name appears first, it's because that's how it appeared on the registration form. In cases where only the man's name was given, the Poobah, whenever it seemed called for, added the name of the wife/partner/significant other. More than a few of you guys 'owe' him. Ages: The Poobah publishes the ages of the men when available, but doesn't 0AGEs