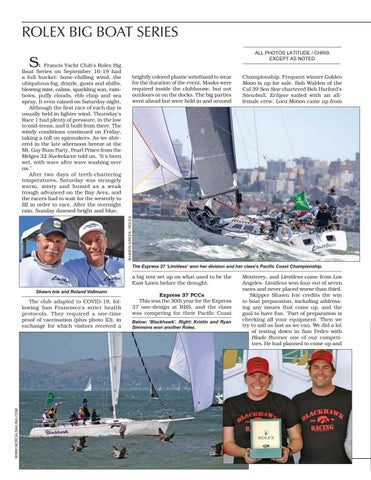 t. Francis Yacht Club's Rolex Big Boat Series on September 16-19 had a full bucket: bone-chilling wind, the ubiquitous fog, drizzle, gusts and shifts, blowing mist, calms, sparkling sun, rainbows, puffy clouds, ebb chop and sea spray. It even rained on Saturday night. Although the first race of each day is usually held in lighter wind, Thursday's Race 1 had plenty of pressure, in the low to mid-teens, and it built from there. The windy conditions continued on Friday, taking a toll on spinnakers. As we shivered in the late afternoon breeze at the Mt. Gay Rum Party, Pearl Prisco from the Melges 32 Nuckelavee told us, "It's been wet, with wave after wave washing over us." After two days of teeth-chattering temperatures, Saturday was strangely warm, misty and humid as a weak trough advanced on the Bay Area, and the racers had to wait for the westerly to fill in order to race. After the overnight rain, Sunday dawned bright and blue.

brightly colored plastic wristband to wear for the duration of the event. Masks were required inside the clubhouse, but not outdoors or on the docks. The big parties went ahead but were held in and around

The Express 37 'Limitless' won her division and her class's Pacific Coast Championship.

a big tent set up on what used to be the East Lawn before the drought. Shawn Ivie and Roland Vollmann

The club adapted to COVID-19, following San Francisco's strict health protocols. They required a one-time proof of vaccination (plus photo ID), in exchange for which visitors received a