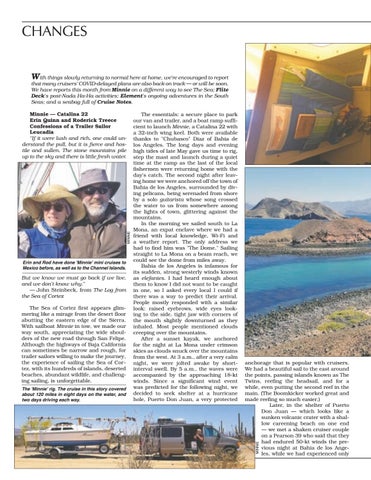 that many cruisers' COVID-delayed plans are also back on track — or will be soon. We have reports this month from Minnie on a different way to see The Sea; Flite Deck's post-Nada Ha-Ha activities; Element's ongoing adventures in the South Seas; and a seabag full of Cruise Notes.

But we know we must go back if we live, and we don't know why." — John Steinbeck, from The Log from the Sea of Cortez The Sea of Cortez first appears glimmering like a mirage from the desert floor abutting the eastern edge of the Sierra. With sailboat Minnie in tow, we made our way south, appreciating the wide shoulders of the new road through San Felipe. Although the highways of Baja California can sometimes be narrow and rough, for trailer sailors willing to make the journey, the experience of sailing the Sea of Cortez, with its hundreds of islands, deserted beaches, abundant wildlife, and challenging sailing, is unforgettable.

The 'Minnie' rig. The cruise in this story covered about 120 miles in eight days on the water, and two days driving each way.

anchorage that is popular with cruisers. We had a beautiful sail to the east around the points, passing islands known as The Twins, reefing the headsail, and for a while, even putting the second reef in the main. (The Boomkicker worked great and made reefing so much easier.) Later, in the shelter of Puerto Don Juan — which looks like a sunken volcanic crater with a shallow careening beach on one end — we met a shaken cruiser couple on a Pearson 39 who said that they had endured 50-kt winds the previous night at Bahia de los Angeles, while we had experienced only MINNIE

Erin and Rod have done 'Minnie' mini cruises to Mexico before, as well as to the Channel Islands.

The essentials: a secure place to park our van and trailer, and a boat ramp sufficient to launch Minnie, a Catalina 22 with a 32-inch wing keel. Both were available thanks to "Chubasco" Diaz of Bahia de los Angeles. The long days and evening high tides of late May gave us time to rig, step the mast and launch during a quiet time at the ramp as the last of the local fishermen were returning home with the day's catch. The second night after leaving home we were anchored off the town of Bahia de los Angeles, surrounded by diving pelicans, being serenaded from shore by a solo guitarista whose song crossed the water to us from somewhere among the lights of town, glittering against the mountains. In the morning we sailed south to La Mona, an expat enclave where we had a friend with local knowledge, Wi-Fi and a weather report. The only address we had to find him was "The Dome." Sailing straight to La Mona on a beam reach, we could see the dome from miles away. Bahia de los Angeles is infamous for its sudden, strong westerly winds known as elefantes. I had heard enough about them to know I did not want to be caught in one, so I asked every local I could if there was a way to predict their arrival. People mostly responded with a similar look: raised eyebrows, wide eyes looking to the side, tight jaw with corners of the mouth slightly downturned as they inhaled. Most people mentioned clouds creeping over the mountains. After a sunset kayak, we anchored for the night at La Mona under crimson skies as clouds snuck over the mountains from the west. At 3 a.m., after a very calm night, we were jolted awake by shortinterval swell. By 5 a.m., the waves were accompanied by the approaching 18-kt winds. Since a significant wind event was predicted for the following night, we decided to seek shelter at a hurricane hole, Puerto Don Juan, a very protected

Minnie — Catalina 22 Erin Quinn and Roderick Treece Confessions of a Trailer Sailor Leucadia "If it were lush and rich, one could understand the pull, but it is fierce and hostile and sullen. The stone mountains pile up to the sky and there is little fresh water.