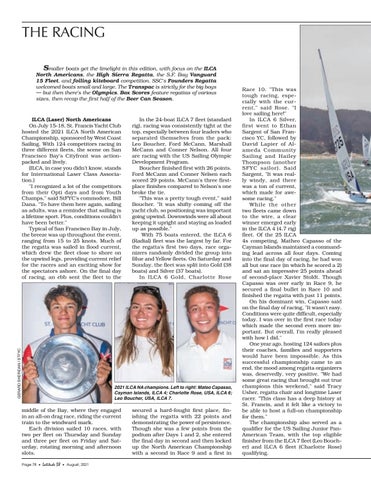 THE RACING Smaller boats get the limelight in this edition, with focus on the ILCA North Americans, the High Sierra Regatta, the S.F. Bay Vanguard 15 Fleet, and foiling kiteboard competition. SSC's Founders Regatta welcomed boats small and large. The Transpac is strictly for the big boys — but then there's the Olympics. Box Scores feature regattas of various sizes, then recap the first half of the Beer Can Season.

ILCA (Laser) North Americans On July 15-18, St. Francis Yacht Club hosted the 2021 ILCA North American Championship, sponsored by West Coast Sailing. With 124 competitors racing in three different fleets, the scene on San Francisco Bay's Cityfront was actionpacked and lively. (ILCA, in case you didn't know, stands for International Laser Class Association.) "I recognized a lot of the competitors from their Opti days and from Youth Champs," said StFYC's commodore, Bill Dana. "To have them here again, sailing as adults, was a reminder that sailing is a lifetime sport. Plus, conditions couldn't have been better." Typical of San Francisco Bay in July, the breeze was up throughout the event, ranging from 15 to 25 knots. Much of the regatta was sailed in flood current, which drew the fleet close to shore on the upwind legs, providing current relief for the racers and an exciting show for the spectators ashore. On the final day of racing, an ebb sent the fleet to the

In the 24-boat ILCA 7 fleet (standard rig), racing was consistently tight at the top, especially between four leaders who separated themselves from the pack: Leo Boucher, Ford McCann, Marshall McCann and Conner Nelson. All four are racing with the US Sailing Olympic Development Program. Boucher finished first with 26 points. Ford McCann and Conner Nelsen each scored 29 points. McCann's three firstplace finishes compared to Nelson's one broke the tie. "This was a pretty tough event," said Boucher. "It was shifty coming off the yacht club, so positioning was important going upwind. Downwinds were all about keeping it upright and staying as loaded up as possible." With 75 boats entered, the ILCA 6 (Radial) fleet was the largest by far. For the regatta's first two days, race organizers randomly divided the group into Blue and Yellow fleets. On Saturday and Sunday, the fleet was split into Gold (38 boats) and Silver (37 boats). In ILCA 6 Gold, Charlotte Rose

middle of the Bay, where they engaged in an all-on drag race, riding the current train to the windward mark. Each division sailed 10 races, with two per fleet on Thursday and Sunday and three per fleet on Friday and Saturday, rotating morning and afternoon slots. 0AGEs