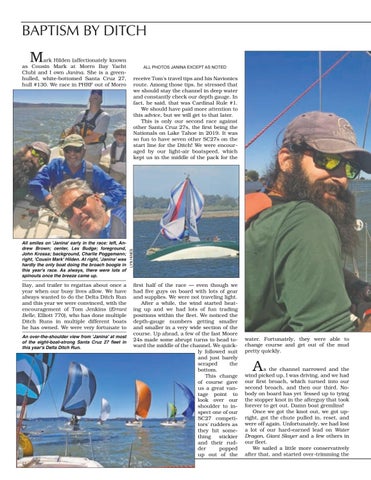 ark Hilden (affectionately known as Cousin Mark at Morro Bay Yacht Club) and I own Janina. She is a greenhulled, white-bottomed Santa Cruz 27, hull #130. We race in PHRF out of Morro

Bay, and trailer to regattas about once a year when our busy lives allow. We have always wanted to do the Delta Ditch Run and this year we were convinced, with the encouragement of Tom Jenkins (Errant Belle, Elliott 770), who has done multiple Ditch Runs in multiple different boats he has owned. We were very fortunate to An over-the-shoulder view from 'Janina' at most of the eight-boat-strong Santa Cruz 27 eet in this year's Delta Ditch Run.