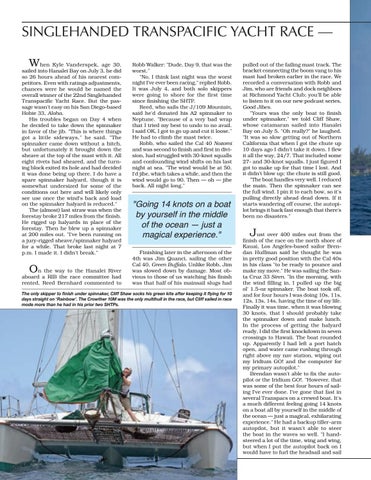 hen Kyle Vanderspek, age 30, sailed into Hanalei Bay on July 3, he did so 26 hours ahead of his nearest competitors. Even with ratings adjustments, chances were he would be named the overall winner of the 22nd Singlehanded Transpacific Yacht Race. But the passage wasn't easy on his San Diego-based Hobie 33, Aloha. His troubles began on Day 4 when he decided to take down the spinnaker in favor of the jib. "This is where things got a little sideways," he said. "The spinnaker came down without a hitch, but unfortunately it brought down the sheave at the top of the mast with it. All eight rivets had sheared, and the turning block exited its hole and had decided it was done being up there. I do have a spare spinnaker halyard, though it is somewhat undersized for some of the conditions out here and will likely only see use once the wind's back and load on the spinnaker halyard is reduced." The (almost) last straw was when the forestay broke 217 miles from the finish. He rigged up halyards in place of the forestay. Then he blew up a spinnaker at 200 miles out. "I've been running on a jury-rigged sheave/spinnaker halyard for a while. That broke last night at 7 p.m. I made it. I didn't break."

n the way to the Hanalei River aboard a RIB the race committee had rented, Reed Bernhard commented to

Robb Walker: "Dude, Day 9, that was the worst." "No, I think last night was the worst night I've ever been racing," replied Robb. It was July 4, and both solo skippers were going to shore for the first time since finishing the SHTP. Reed, who sails the J/109 Mountain, said he'd donated his A2 spinnaker to Neptune. "Because of a very bad wrap that I tried my best to undo to no avail. I said OK, I got to go up and cut it loose." He had to climb the mast twice. Robb, who sailed the Cal 40 Nozomi and was second to finish and first in division, had struggled with 30-knot squalls and confounding wind shifts on his last night at sea. "The wind would be at 50. I'd jibe, which takes a while, and then the wind would go to 90. Then — oh — jibe back. All night long."

"Going 14 knots on a boat by yourself in the middle of the ocean — just a magical experience." Finishing later in the afternoon of the 4th was Jim Quanci, sailing the other Cal 40, Green Buffalo. Unlike Robb, Jim was slowed down by damage. Most obvious to those of us watching his finish was that half of his mainsail slugs had

The only skipper to finish under spinnaker, Cliff Shaw socks his green kite after keeping it flying for 10 days straight on 'Rainbow'. The Crowther 10M was the only multihull in the race, but Cliff sailed in race mode more than he had in his prior two SHTPs.

pulled out of the failing mast track. The bracket connecting the boom vang to his mast had broken earlier in the race. We recorded a conversation with Robb and Jim, who are friends and dock neighbors at Richmond Yacht Club; you'll be able to listen to it on our new podcast series, Good Jibes. "Yours was the only boat to finish under spinnaker," we told Cliff Shaw, whose catamaran sailed into Hanalei Bay on July 5. "Oh really?" he laughed. "It was so slow getting out of Northern California that when I got the chute up 10 days ago I didn't take it down. I flew it all the way, 24/7. That included some 27- and 30-knot squalls. I just figured I got to make up for that time I lost. And it didn't blow up; the chute is still good. "The boat handles very well. I reduced the main. Then the spinnaker can see the full wind. I pin it to each bow, so it's pulling directly ahead dead down. If it starts wandering off course, the autopilot brings it back fast enough that there's been no disasters."

ust over 400 miles out from the finish of the race on the north shore of Kauai, Los Angeles-based sailor Brendan Huffman said he thought he was in pretty good position with the Cal 40s in his class "to be ready to pounce and make my move." He was sailing the Santa Cruz 33 Siren. "In the morning, with the wind filling in, I pulled up the big ol' 1.5-oz spinnaker. The boat took off, and for four hours I was doing 10s, 11s, 12s, 13s, 14s, having the time of my life. Finally it was time, when it was blowing 30 knots, that I should probably take the spinnaker down and make lunch. In the process of getting the halyard ready, I did the first knockdown in seven crossings to Hawaii. The boat rounded up. Apparently I had left a port hatch open, and water came rushing through right above my nav station, wiping out my Iridium GO! and the computer for my primary autopilot." Brendan wasn't able to fix the autopilot or the Iridium GO!. "However, that was some of the best four hours of sailing I've ever done. I've gone that fast in several Transpacs on a crewed boat. It's a much different feeling going 14 knots on a boat all by yourself in the middle of the ocean — just a magical, exhilarating experience." He had a backup tiller-arm autopilot, but it wasn't able to steer the boat in the waves so well. "I handsteered a lot of the time, wing and wing, but when I put the autopilot back on I would have to furl the headsail and sail