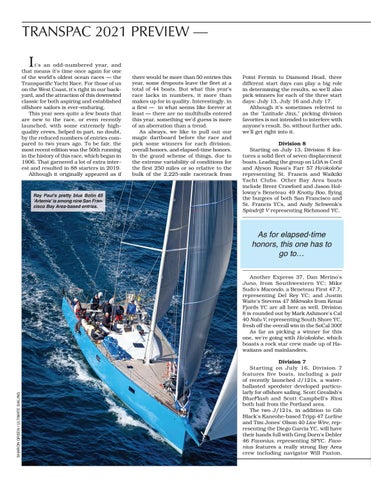 t's an odd-numbered year, and that means it's time once again for one of the world's oldest ocean races — the Transpacific Yacht Race. For those of us on the West Coast, it's right in our backyard, and the attraction of this downwind classic for both aspiring and established offshore sailors is ever-enduring. This year sees quite a few boats that are new to the race, or even recently launched, with some extremely highquality crews, helped in part, no doubt, by the reduced numbers of entries compared to two years ago. To be fair, the most recent edition was the 50th running in the history of this race, which began in 1906. That garnered a lot of extra interest and resulted in 88 starters in 2019. Although it originally appeared as if

there would be more than 50 entries this year, some dropouts leave the fleet at a total of 44 boats. But what this year's race lacks in numbers, it more than makes up for in quality. Interestingly, in a first — in what seems like forever at least — there are no multihulls entered this year, something we'd guess is more of an aberration than a trend. As always, we like to pull out our magic dartboard before the race and pick some winners for each division, overall honors, and elapsed-time honors. In the grand scheme of things, due to the extreme variability of conditions for the first 250 miles or so relative to the bulk of the 2,225-mile racetrack from

Point Fermin to Diamond Head, three different start days can play a big role in determining the results, so we'll also pick winners for each of the three start days: July 13, July 16 and July 17. Although it's sometimes referred to as the "Latitude Jinx," picking division favorites is not intended to interfere with anyone's result. So, without further ado, we'll get right into it. Division 8 Starting on July 13, Division 8 features a solid fleet of seven displacement boats. Leading the group on LOA is Cecil and Alyson Rossi's Farr 57 Ho'okolohe representing St. Francis and Waikiki Yacht Clubs. Other Bay Area boats include Brent Crawford and Jason Holloway's Beneteau 49 Knotty Boo, flying the burgees of both San Francisco and St. Francis YCs, and Andy Schwenk's Spindrift V representing Richmond YC.

As for elapsed-time honors, this one has to go to…

Another Express 37, Dan Merino's Juno, from Southwestern YC; Mike Sudo's Macondo, a Beneteau First 47.7, representing Del Rey YC; and Justin Waite's Stevens 47 Mikmaks from Kenai Fjords YC are all here as well. Division 8 is rounded out by Mark Ashmore's Cal 40 Nalu V, representing South Shore YC, fresh off the overall win in the SoCal 300! As far as picking a winner for this one, we're going with Ho'okolohe, which boasts a rock star crew made up of Hawaiians and mainlanders. Division 7 Starting on July 16, Division 7 features five boats, including a pair of recently launched J/121s, a waterballasted speedster developed particularly for offshore sailing. Scott Grealish's BlueFlash and Scott Campbell's Riva both hail from the Portland area. The two J/121s, in addition to Gib Black's Kaneohe-based Tripp 47 Lurline and Tim Jones' Olson 40 Live Wire, representing the Diego Garcia YC, will have their hands full with Greg Dorn's Dehler 46 Favonius, representing SFYC. Favonius features a really strong Bay Area crew including navigator Will Paxton,