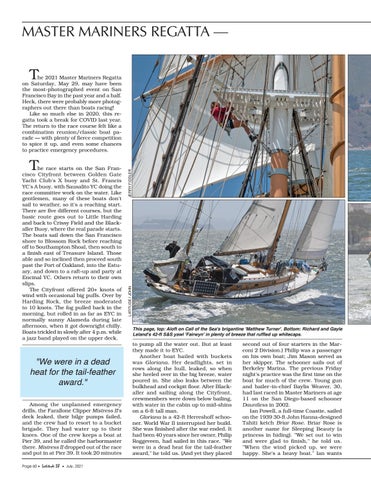 "We were in a dead heat for the tail-feather award." Among the unplanned emergency drills, the Farallone Clipper Mistress II's deck leaked, their bilge pumps failed, and the crew had to resort to a bucket brigade. They had water up to their knees. One of the crew keeps a boat at Pier 39, and he called the harbormaster there. Mistress II dropped out of the race and put in at Pier 39. It took 20 minutes 0AGEsLatitude

he race starts on the San Francisco Cityfront between Golden Gate Yacht Club's X buoy and St. Francis YC's A buoy, with Sausalito YC doing the race committee work on the water. Like gentlemen, many of these boats don't sail to weather, so it's a reaching start. There are five different courses, but the basic route goes out to Little Harding and back to Crissy Field and the Blackaller Buoy, where the real parade starts. The boats sail down the San Francisco shore to Blossom Rock before reaching off to Southampton Shoal, then south to a finish east of Treasure Island. Those able and so inclined then proceed south past the Port of Oakland, into the Estuary, and down to a raft-up and party at Encinal YC. Others return to their own slips. The Cityfront offered 20+ knots of wind with occasional big puffs. Over by Harding Rock, the breeze moderated to 10 knots. The fog pulled back in the morning, but rolled in as far as EYC in normally sunny Alameda during late afternoon, when it got downright chilly. Boats trickled in slowly after 4 p.m. while a jazz band played on the upper deck.

he 2021 Master Mariners Regatta on Saturday, May 29, may have been the most-photographed event on San Francisco Bay in the past year and a half. Heck, there were probably more photographers out there than boats racing! Like so much else in 2020, this regatta took a break for COVID last year. The return to the race course felt like a combination reunion/classic boat parade — with plenty of fierce competition to spice it up, and even some chances to practice emergency procedures.

This page, top: Aloft on Call of the Sea's brigantine 'Matthew Turner'. Bottom: Richard and Gayle eland's -ft yawl ' airwyn' in plenty of bree e that ruffled up whitecaps.

to pump all the water out. But at least they made it to EYC. Another boat bailed with buckets was Gloriana. Her deadlights, set in rows along the hull, leaked, so when she heeled over in the big breeze, water poured in. She also leaks between the bulkhead and cockpit floor. After Blackaller and sailing along the Cityfront, crewmembers were down below bailing, with water in the cabin up to mid-shins on a 6-ft tall man. Gloriana is a 42-ft Herreshoff schooner. World War II interrupted her build. She was finished after the war ended. It had been 40 years since her owner, Philip Roggeveen, had sailed in this race. "We were in a dead heat for the tail-feather award," he told us. (And yet they placed

second out of four starters in the Marconi 2 Division.) Philip was a passenger on his own boat; Jim Mason served as her skipper. The schooner sails out of Berkeley Marina. The previous Friday night's practice was the first time on the boat for much of the crew. Young gun and bailer-in-chief Baylis Weaver, 30, had last raced in Master Mariners at age 11 on the San Diego-based schooner Dauntless in 2002. Ian Powell, a full-time Coastie, sailed on the 1939 30-ft John Hanna-designed Tahiti ketch Briar Rose. Briar Rose is another name for Sleeping Beauty (a princess in hiding). "We set out to win and were glad to finish," he told us. "When the wind picked up, we were happy. She's a heavy boat." Ian wants