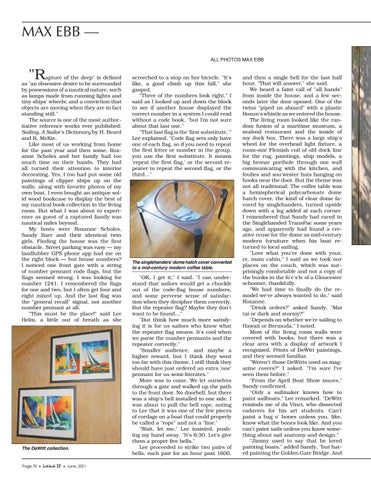 apture of the deep" is defined as "an obsessive desire to be surrounded by possessions of a nautical nature, such as lamps made from running lights and tiny ships' wheels; and a conviction that objects are moving when they are in fact standing still." The source is one of the most authoritative reference works ever published: Sailing, A Sailor's Dictionary by H. Beard and R. McKie. Like most of us working from home for the past year and then some, Roxanne Scholes and her family had too much time on their hands. They had all turned their attention to interior decorating. Yes, I too had put some old paintings of clipper ships up on the walls, along with favorite photos of my own boat. I even bought an antique solid wood bookcase to display the best of my nautical book collection in the living room. But what I was about to experience as guest of a raptured family was nautical miles beyond. My hosts were Roxanne Scholes, Sandy Barr and their identical twin girls. Finding the house was the first obstacle. Street parking was easy — my landlubber GPS phone app had me on the right block — but house numbers? I noticed one front gate with a string of number pennant code flags, but the flags seemed wrong. I was looking for number 1241. I remembered the flags for one and two, but I often get four and eight mixed up. And the last flag was the "general recall" signal, not another number pennant at all. "This must be the place!" said Lee Helm, a little out of breath as she

screeched to a stop on her bicycle. "It's like, a good climb up this hill," she gasped. "Three of the numbers look right," I said as I looked up and down the block to see if another house displayed the correct number in a system I could read without a code book, "but I'm not sure about that last one." "That last flag is the 'first substitute,' " Lee explained. "Code flag sets only have one of each flag, so if you need to repeat the first letter or number in the group, you use the first substitute. It means 'repeat the first flag,' or the second repeater to repeat the second flag, or the third…"

"OK, I get it," I said. "I can understand that sailors would get a chuckle out of the code-flag house numbers, and some perverse sense of satisfaction when they decipher them correctly. But the repeater flag? Maybe they don't want to be found…" "But think how much more satisfying it is for us sailors who know what the repeater flag means. It's cool when we parse the number pennants and the repeater correctly." "Smaller audience, and maybe a higher reward, but I think they went too far with this theme. I still think they should have just ordered an extra 'one' pennant for us semi-literates." More was to come. We let ourselves through a gate and walked up the path to the front door. No doorbell, but there was a ship's bell installed to one side. I was about to pull the bell rope, noting to Lee that it was one of the few pieces of cordage on a boat that could properly be called a "rope" and not a "line." "Wait, let me," Lee insisted, pushing my hand away. "It's 6:30. Let's give them a proper five bells." Lee proceeded to strike two pairs of bells, each pair for an hour past 1600,

and then a single bell for the last half hour. "That will answer," she said. We heard a faint call of "all hands" from inside the house, and a few seconds later the door opened. One of the twins "piped us aboard" with a plastic Bosun's whistle as we entered the house. The living room looked like the random fusion of a maritime museum, a seafood restaurant and the inside of my dock box. There was a large ship's wheel for the overhead light fixture, a room-size Flemish coil of old dock line for the rug, paintings, ship models, a big bronze porthole through one wall communicating with the kitchen, and foulies and sou'wester hats hanging on hooks near the door. But the theme was not all traditional: The coffee table was a hemispherical polycarbonate dome hatch cover, the kind of clear dome favored by singlehanders, turned upside down with a leg added at each corner. I remembered that Sandy had raced in the Singlehanded TransPac some years ago, and apparently had found a creative reuse for the dome as mid-century modern furniture when his boat returned to local sailing. "Love what you've done with your, er, main cabin," I said as we took our places on the couch, which was surprisingly comfortable and not a copy of the bunks in the fo'c's'le of a Gloucester schooner, thankfully. "We had time to finally do the remodel we've always wanted to do," said Roxanne. "Drink orders?" asked Sandy. "Mai tai or dark and stormy?" "Depends on whether we're sailing to Hawaii or Bermuda," I noted. Most of the living room walls were covered with books, but there was a clear area with a display of artwork I recognized. Prints of DeWitt paintings, and they seemed familiar. "Weren't those DeWitts used as magazine covers?" I asked. "I'm sure I've seen them before." "From the April Boat Show issues," Sandy confirmed. "Only a sailmaker knows how to paint sailboats," Lee remarked. "DeWitt reminds me of da Vinci, who dissected cadavers for his art students. Can't paint a bag o' bones unless you, like, know what the bones look like. And you can't paint sails unless you know something about sail anatomy and design." "Jimmy used to say that he loved painting boats," added Sandy, "but hated painting the Golden Gate Bridge. And