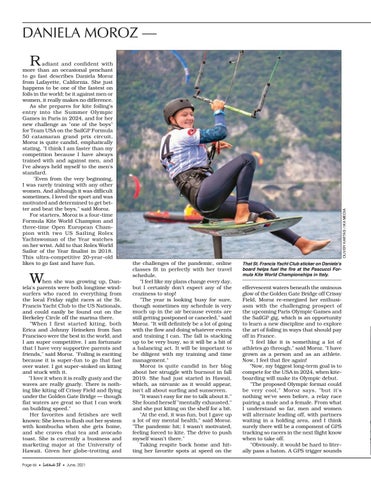 hen she was growing up, Daniela's parents were both longtime windsurfers who raced in everything from the local Friday night races at the St. Francis Yacht Club to the US Nationals, and could easily be found out on the Berkeley Circle off the marina there. "When I first started kiting, both Erica and Johnny Heineken from San Francisco were the best in the world, and I am super competitive. I am fortunate that I have very supportive parents and friends," said Moroz. "Foiling is exciting because it is super-fun to go that fast over water. I got super-stoked on kiting and stuck with it. "I love it when it is really gusty and the waves are really gnarly. There is nothing like kiting off Crissy Field and flying under the Golden Gate Bridge — though flat waters are great so that I can work on building speed." Her favorites and fetishes are well known: She loves to flush out her system with kombucha when she gets home, and she craves chai tea and avocado toast. She is currently a business and marketing major at the University of Hawaii. Given her globe-trotting and Page 66 •

adiant and confident with more than an occasional penchant to go fast describes Daniela Moroz from Lafayette, California. She just happens to be one of the fastest on foils in the world; be it against men or women, it really makes no difference. As she prepares for kite foiling's entry into the Summer Olympic Games in Paris in 2024, and for her new challenge as "one of the boys" for Team USA on the SailGP Formula 50 catamaran grand prix circuit, Moroz is quite candid, emphatically stating, "I think I am faster than my competition because I have always trained with and against men, and I've always held myself to the men's standard. "Even from the very beginning, I was rarely training with any other women. And although it was difficult sometimes, I loved the sport and was motivated and determined to get better and beat the boys," said Moroz. For starters, Moroz is a four-time Formula Kite World Champion and three-time Open European Champion with two US Sailing Rolex Yachtswoman of the Year watches on her wrist. Add to that Rolex World Sailor of the Year finalist in 2018. This ultra-competitive 20-year-old likes to go fast and have fun.

the challenges of the pandemic, online classes fit in perfectly with her travel schedule. "I feel like my plans change every day, but I certainly don't expect any of the craziness to stop! "The year is looking busy for sure, though sometimes my schedule is very much up in the air because events are still getting postponed or canceled," said Moroz. "It will definitely be a lot of going with the flow and doing whatever events and training I can. The fall is stacking up to be very busy, so it will be a bit of a balancing act. It will be important to be diligent with my training and time management." Moroz is quite candid in her blog about her struggle with burnout in fall 2019. She had just started in Hawaii, which, as nirvanic as it would appear, isn't all about surfing and sunscreen. "It wasn't easy for me to talk about it." She found herself "mentally exhausted," and she put kiting on the shelf for a bit. "At the end, it was fun, but I gave up a lot of my mental health," said Moroz. "The pandemic hit; I wasn't motivated, feeling forced to kite. The drive to push myself wasn't there." Taking respite back home and hitting her favorite spots at speed on the

That St. Francis Yacht Club sticker on Daniela's board helps fuel the fire at the Pascucci Formula Kite World Championships in Italy.

effervescent waters beneath the ominous glow of the Golden Gate Bridge off Crissy Field, Moroz re-energized her enthusiasm with the challenging prospect of the upcoming Paris Olympic Games and the SailGP gig, which is an opportunity to learn a new discipline and to explore the art of foiling in ways that should pay off in France. "I feel like it is something a lot of athletes go through," said Moroz. "I have grown as a person and as an athlete. Now, I feel that fire again! "Now, my biggest long-term goal is to compete for the USA in 2024, when kiteboarding will make its Olympic debut. "The proposed Olympic format could be very cool," Moroz says, "but it's nothing we've seen before, a relay race pairing a male and a female. From what I understand so far, men and women will alternate leading off, with partners waiting in a holding area, and I think surely there will be a component of GPS tracking so racers in the next flight know when to take off. "Obviously, it would be hard to literally pass a baton. A GPS trigger sounds