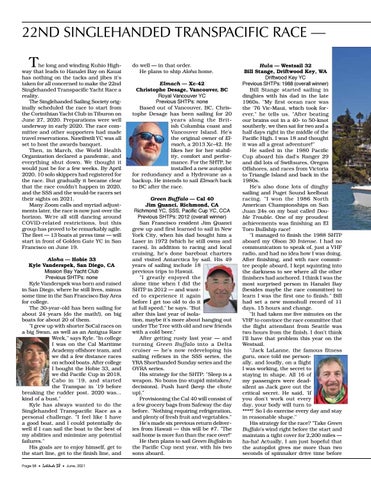 he long and winding Kuhio Highway that leads to Hanalei Bay on Kauai has nothing on the tacks and jibes it's taken for all concerned to make the 22nd Singlehanded Transpacific Yacht Race a reality. The Singlehanded Sailing Society originally scheduled the race to start from the Corinthian Yacht Club in Tiburon on June 27, 2020. Preparations were well underway in early 2020. The race committee and other supporters had made travel reservations. Nawiliwili YC was all set to host the awards banquet. Then, in March, the World Health Organization declared a pandemic, and everything shut down. We thought it would just be for a few weeks. By April 2020, 10 solo skippers had registered for the race. But gradually it became clear that the race couldn't happen in 2020, and the SSS and the would-be racers set their sights on 2021. Many Zoom calls and myriad adjustments later, the race is now just over the horizon. We're all still dancing around COVID-related restrictions, but this group has proved to be remarkably agile. The fleet — 13 boats at press time — will start in front of Golden Gate YC in San Francisco on June 19. Aloha — Hobie 33 Kyle Vanderspek, San Diego, CA Mission Bay Yacht Club Previous SHTPs: none Kyle Vanderspek was born and raised in San Diego, where he still lives, minus some time in the San Francisco Bay Area for college. The 30-year-old has been sailing for about 24 years (do the math!), on big boats for about 20 of them. "I grew up with shorter SoCal races on a big Swan, as well as an Antigua Race Week," says Kyle. "In college I was on the Cal Maritime Academy offshore team, and we did a few distance races on school boats. After college I bought the Hobie 33, and we did Pacific Cup in 2018, Cabo in '19, and started the Transpac in '19 before breaking the rudder post. 2020 was... kind of a bust." Kyle has always wanted to do the Singlehanded Transpacific Race as a personal challenge. "I feel like I have a good boat, and I could potentially do well if I can sail the boat to the best of my abilities and minimize any potential failures." His goals are to enjoy himself, get to the start line, get to the finish line, and Page 58 •

do well — in that order. He plans to ship Aloha home. Elmach — Xc-42 Christophe Desage, Vancouver, BC Royal Vancouver YC Previous SHTPs: none Based out of Vancouver, BC, Christophe Desage has been sailing for 20 years along the British Columbia coast and Vancouver Island. He's the original owner of Elmach, a 2013 Xc-42. He likes her for her stability, comfort and performance. For the SHTP, he installed a new autopilot for redundancy and a Hydrovane as a backup. He intends to sail Elmach back to BC after the race. Green Buffalo — Cal 40 Jim Quanci, Richmond, CA Richmond YC, SSS, Paciﬁc Cup YC, CCA Previous SHTPs: 2012 (overall winner) San Francisco resident Jim Quanci grew up and first learned to sail in New York City, when his dad bought him a Laser in 1972 (which he still owns and races). In addition to racing and local cruising, he's done bareboat charters and visited Antarctica by sail. His 49 years of sailing include 18 previous trips to Hawaii. "I greatly enjoyed the alone time when I did the SHTP in 2012 — and wanted to experience it again before I get too old to do it at full speed," he says. "But after this last year of isolation, maybe it's more about hanging out under The Tree with old and new friends with a cold beer." After getting rusty last year — and turning Green Buffalo into a Delta cruiser — he's now redeveloping his sailing reflexes in the SSS series, the YRA Shorthanded Sunday series and the OYRA series. His strategy for the SHTP: "Sleep is a weapon. No bozos (no stupid mistakes/ decisions). Push hard (keep the chute up)." Provisioning the Cal 40 will consist of a few grocery bags from Safeway the day before. "Nothing requiring refrigeration, and plenty of fresh fruit and vegetables." He's made six previous return deliveries from Hawaii — this will be #7. "The sail home is more fun than the race over!" He then plans to sail Green Buffalo in the Pacific Cup next year, with his two sons aboard.

Hula — Westsail 32 Bill Stange, Driftwood Key, WA Driftwood Key YC Previous SHTPs: 1988 (overall winner) Bill Stange started sailing in dinghies with his dad in the late 1960s. "My first ocean race was the '76 Vic-Maui, which took forever," he tells us. "After beating our brains out in a 40- to 50-knot southerly, we then sat for two and a half days right in the middle of the Pacific High. I was 18 and thought it was all a great adventure!" He sailed in the 1980 Pacific Cup aboard his dad's Ranger 29 and did lots of Swiftsures, Oregon Offshores, and races from Victoria to Triangle Island and back in the 1980s. He's also done lots of dinghy sailing and Puget Sound keelboat racing. "I won the 1986 North American Championships on San Juan 24s on my boat called Double Trouble. One of my proudest achievements was finishing an El Toro Bullship race! "I managed to finish the 1988 SHTP aboard my Olson 30 Intense. I had no communication to speak of, just a VHF radio, and had no idea how I was doing. After finishing, and with race committee people aboard, I kept squinting into the darkness to see where all the other finishers had anchored. I think I was the most surprised person in Hanalei Bay (besides maybe the race committee) to learn I was the first one to finish." Bill had set a new monohull record of 11 days, 15 hours and change. "It had taken me five minutes on the VHF to convince the race committee that the flight attendant from Seattle was two hours from the finish. I don't think I'll have that problem this year on the Westsail. "Jack LaLanne, the famous fitness guru, once told me personally, and loudly, on a flight I was working, the secret to staying in shape. All 16 of my passengers were deadsilent as Jack gave out the critical secret. He said, 'If you don't work out every day, your body will turn to ****!' So I do exercise every day and stay in reasonable shape." His strategy for the race? "Take Green Buffalo's wind right before the start and maintain a tight cover for 2,200 miles — ha-ha! Actually, I am just hopeful that the autopilot gives me more than two seconds of spinnaker drive time before