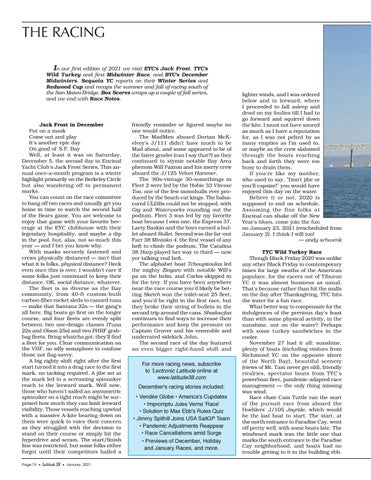 THE RACING In our first edition of 2021 we visit EYC's Jack Frost, TYC's Wild Turkey and first Midwinter Race, and BYC's December Midwinters. Sequoia YC reports on their Winter Series and Redwood Cup and recaps the summer and fall of racing south of the San Mateo Bridge. Box Scores wraps up a couple of fall series, and we end with Race Notes.

Jack Frost in December Put on a mask Come out and play It's another epic day On good ol' S.F. Bay Well, at least it was on Saturday, December 5, the second day in Encinal Yacht Club's Jack Frost Series. This annual once-a-month program is a winter highlight primarily on the Berkeley Circle but also wandering off to permanent marks. You can count on the race committee to bang off two races and usually get you home in time to watch the second half of the Bears game. You are welcome to enjoy that game with your favorite beverage at the EYC clubhouse with their legendary hospitality, and maybe a dip in the pool, but, alas, not so much this year — and I bet you know why. With masks securely fastened and crews physically distanced — isn't that what it is folks, physical distance? Heck even once this is over, I wouldn't care if some folks just continued to keep their distance. OK, social distance, whatever. The fleet is as diverse as the Bay community, from 40-ft custom-built carbon-fiber rocket sleds to canned tuna — make that Santana 22s — the gang's all here. Big boats go first on the longer course, and four fleets are evenly split between two one-design classes (Tuna 22s and Olson 25s) and two PHRF grabbag fleets. Bring whatcha got; they'll find a fleet for you. Clear communication on the VHF, no silly semaphore to confuse those not flag-savvy. A big righty shift right after the first start turned it into a drag race to the first mark, no tacking required. A jibe set at the mark led to a screaming spinnaker reach to the leeward mark. Well now, those who haven't sailed an asymmetric spinnaker on a tight reach might be surprised how much they can limit leeward visibility. Those vessels reaching upwind with a massive A-kite bearing down on them were quick to voice their concern as they struggled with the decision to stand on their course or simply hit the hyperdrive and scram. The start/finish line was restricted, but some folks either forgot until their competitors hailed a Page 74 •

friendly reminder or figured maybe no one would notice. The MadMen aboard Dorian McKelvey's J/111 didn't have much to be Mad about, and some appeared to be of the fairer gender (can I say that?) as they continued to stymie notable Bay Area phenom Will Paxton and his merry crew aboard the J/125 Velvet Hammer. The '80s-vintage 30-somethings in Fleet 2 were led by the Hobie 33 Vitesse Too, one of the few monohulls ever produced by the beach-cat kings. The balsacored ULDBs could not be stopped, with Gig and Waterworks rounding out the podium. Fleet 3 was led by my favorite boat because I own one, the Express 37. Larry Baskin and the boys earned a bullet aboard Bullet. Second was the far-out Farr 38 Mintaka 4, the first vessel of any heft to climb the podium. The Catalina 38 Harp played her way to third — now yer talking real heft. The alphabet boat Tchoupitoulas led the mighty Zingaro with notable Will's pa on the helm, and Carlos skipped in for the trey. If you have been anywhere near the race course you'd likely be betting Sketch won the toilet-seat 25 fleet, and you'd be right in the first race, but they broke their string of bullets in the second trip around the cans. Shadowfax continues to find ways to increase their performance and keep the pressure on Captain Gruver and his venerable and underrated sidekick John. The second race of the day featured an even bigger right-hand shift and

lighter winds, and I was ordered below and to leeward, where I proceeded to fall asleep and drool on my foulies till I had to go forward and squirrel down the kite. I must not have snored as much as I have a reputation for, as I was not pelted by as many empties as I'm used to, or maybe as the crew slalomed through the boats reaching back and forth they were too busy to drain them. If you're like my mother, who used to say, "Don't jibe or you'll capsize!" you would have enjoyed this day on the water. Believe it or not, 2020 is supposed to end on schedule. Assuming the fine folks at Encinal can shake off the New Year's blues, come join the fun on January 23, 2021 (rescheduled from January 2). I think I will too! — andy schwenk TYC Wild Turkey Race Though Black Friday 2020 was unlike any other Black Friday in comtemporary times for large swaths of the American populace, for the racers out of Tiburon YC it was almost business as usual. That's because rather than hit the malls on the day after Thanksgiving, TYC hits the water for a fun race. What better way to compensate for the indulgences of the previous day's feast than with some physical activity, in the sunshine, out on the water? Perhaps with some turkey sandwiches in the cooler. November 27 had it all: sunshine, plenty of boats (including visitors from Richmond YC on the opposite shore of the North Bay), beautiful scenery (views of Mt. Tam never get old), friendly rivalries, spectator boats from TYC's powerboat fleet, pandemic-adapted race management — the only thing missing was wind. Race chair Cam Tuttle ran the start of the pursuit race from aboard the Hoehlers' J/105 Joyride, which would be the last boat to start. The start, at the north entrance to Paradise Cay, went off pretty well, with some boats late. The windward mark was the little one that marks the south entrance to the Paradise Cay neighborhood, and boats had no trouble getting to it in the building ebb.