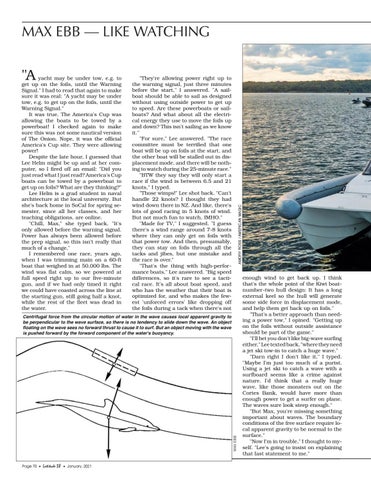 yacht may be under tow, e.g. to get up on the foils, until the Warning Signal." I had to read that again to make sure it was real: "A yacht may be under tow, e.g. to get up on the foils, until the Warning Signal." It was true. The America's Cup was allowing the boats to be towed by a powerboat! I checked again to make sure this was not some nautical version of The Onion. Nope, it was the official America's Cup site. They were allowing power! Despite the late hour, I guessed that Lee Helm might be up and at her computer, so I fired off an email: "Did you just read what I just read? America's Cup boats can be towed by a powerboat to get up on foils? What are they thinking?" Lee Helm is a grad student in naval architecture at the local university. But she's back home in SoCal for spring semester, since all her classes, and her teaching obligations, are online. "Chill, Max," she typed back. "It's only allowed before the warning signal. Power has always been allowed before the prep signal, so this isn't really that much of a change." I remembered one race, years ago, when I was trimming main on a 60-ft boat that weighed in at 50,000 lbs. The wind was flat calm, so we powered at full speed right up to our five-minute gun, and if we had only timed it right we could have coasted across the line at the starting gun, still going half a knot, while the rest of the fleet was dead in the water.

"They're allowing power right up to the warning signal, just three minutes before the start," I answered. "A sailboat should be able to sail as designed without using outside power to get up to speed. Are these powerboats or sailboats? And what about all the electrical energy they use to move the foils up and down? This isn't sailing as we know it." "For sure," Lee answered. "The race committee must be terrified that one boat will be up on foils at the start, and the other boat will be stalled out in displacement mode, and there will be nothing to watch during the 25-minute race." "BTW they say they will only start a race if the wind is between 6.5 and 21 knots," I typed. "Those wimps!" Lee shot back. "Can't handle 22 knots? I thought they had wind down there in NZ. And like, there's lots of good racing in 5 knots of wind. But not much fun to watch, IMHO." "Made for TV," I suggested. "I guess there's a wind range around 7-8 knots where they can only get on foils with that power tow. And then, presumably, they can stay on foils through all the tacks and jibes, but one mistake and the race is over." "That's the thing with high-performance boats," Lee answered. "Big speed differences, so it's rare to see a tactical race. It's all about boat speed, and who has the weather that their boat is optimized for, and who makes the fewest 'unforced errors' like dropping off the foils during a tack when there's not

Centrifugal force from the circular motion of water in the wave causes local apparent gravity to be perpendicular to the wave surface, so there is no tendency to slide down the wave. An object floating on the wave sees no forward thrust to cause it to surf. But an object moving with the wave is pushed forward by the forward component of the water's buoyancy.

enough wind to get back up. I think that's the whole point of the Kiwi boatnumber-two hull design: It has a long external keel so the hull will generate some side force in displacement mode, and help them get back up on foils." "That's a better approach than needing a power tow," I opined. "Getting up on the foils without outside assistance should be part of the game." "I'll bet you don't like big-wave surfing either," Lee texted back, "where they need a jet ski tow-in to catch a huge wave." "Darn right I don't like it," I typed. "Maybe I'm just too much of a purist. Using a jet ski to catch a wave with a surfboard seems like a crime against nature. I'd think that a really huge wave, like those monsters out on the Cortes Bank, would have more than enough power to get a surfer on plane. The waves sure look steep enough." "But Max, you're missing something important about waves. The boundary conditions of the free surface require local apparent gravity to be normal to the surface." "Now I'm in trouble," I thought to myself. "Lee's going to insist on explaining that last statement to me."