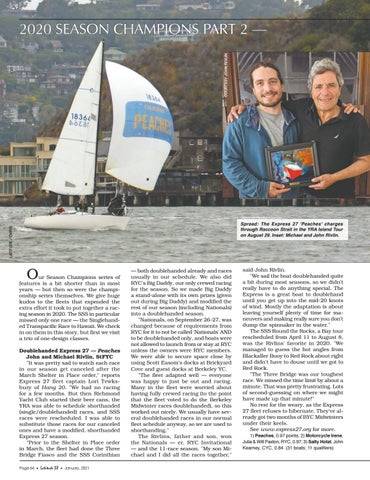 Spread: The Express 27 'Peaches' charges through Raccoon Strait in the YRA Island Tour on August 29. Inset: Michael and John Rivlin.

ur Season Champions series of features is a bit shorter than in most years — but then so were the championship series themselves. We give huge kudos to the fleets that expended the extra effort it took to put together a racing season in 2020. The SSS in particular missed only one race — the Singlehanded Transpacific Race to Hawaii. We check in on them in this story, but first we visit a trio of one-design classes. Doublehanded Express 27 — Peaches John and Michael Rivlin, StFYC "It was pretty sad to watch each race in our season get canceled after the March Shelter in Place order," reports Express 27 fleet captain Lori Tewksbury of Hang 20. "We had no racing for a few months. But then Richmond Yacht Club started their beer cans, the YRA was able to schedule shorthanded (single/doublehanded) races, and SSS races were rescheduled. I was able to substitute those races for our canceled ones and have a modified, shorthanded Express 27 season. "Prior to the Shelter in Place order in March, the fleet had done the Three Bridge Fiasco and the SSS Corinthian Page 64 •

— both doublehanded already and races usually in our schedule. We also did RYC's Big Daddy, our only crewed racing for the season. So we made Big Daddy a stand-alone with its own prizes (given out during Big Daddy) and modified the rest of our season (including Nationals) into a doublehanded season. "Nationals, on September 26-27, was changed because of requirements from RYC for it to not be called 'Nationals' AND to be doublehanded only, and boats were not allowed to launch from or stay at RYC unless the owners were RYC members. We were able to secure space close by using Scott Easom's docks at Brickyard Cove and guest docks at Berkeley YC. "The fleet adapted well — everyone was happy to just be out and racing. Many in the fleet were worried about having fully crewed racing (to the point that the fleet voted to do the Berkeley Midwinter races doublehanded), so this worked out nicely. We usually have several doublehanded races in our normal fleet schedule anyway, so we are used to shorthanding." The Rivlins, father and son, won the Nationals — er, RYC Invitational — and the 11-race season. "My son Michael and I did all the races together,"

said John Rivlin. "We sail the boat doublehanded quite a bit during most seasons, so we didn't really have to do anything special. The Express is a great boat to doublehand until you get up into the mid-20 knots of wind. Mostly the adaptation is about leaving yourself plenty of time for maneuvers and making really sure you don't dump the spinnaker in the water." The SSS Round the Rocks, a Bay tour rescheduled from April 11 to August 8, was the Rivlins' favorite in 2020. "We managed to guess the hot angles from Blackaller Buoy to Red Rock about right and didn't have to douse until we got to Red Rock. "The Three Bridge was our toughest race. We missed the time limit by about a minute. That was pretty frustrating. Lots of second-guessing on where we might have made up that minute!" No rest for the weary, as the Express 27 fleet refuses to hibernate. They've already got two months of BYC Midwinters under their keels. See www.express27.org for more.