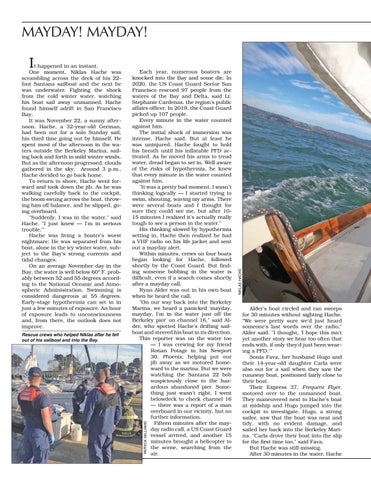 Rescue crews who helped Niklas after he fell out of his sailboat and into the Bay.

Each year, numerous boaters are knocked into the Bay and some die. In 2020, the US Coast Guard Sector San Francisco rescued 97 people from the waters of the Bay and Delta, said Lt. Stephanie Cardenas, the region's public affairs officer. In 2019, the Coast Guard picked up 107 people. Every minute in the water counted against him. The initial shock of immersion was intense, Hache said. But at least he was uninjured. Hache fought to hold his breath until his inflatable PFD activated. As he moved his arms to tread water, dread began to set in. Well aware of the risks of hypothermia, he knew that every minute in the water counted against him. "It was a pretty bad moment. I wasn't thinking logically — I started trying to swim, shouting, waving my arms. There were several boats and I thought for sure they could see me, but after 1015 minutes I realized it's actually really tough to see a person in the water." His thinking slowed by hypothermia setting in, Hache then realized he had a VHF radio on his life jacket and sent out a mayday alert. Within minutes, crews on four boats began looking for Hache, followed shortly by the Coast Guard. But finding someone bobbing in the water is difficult, even if a search comes shortly after a mayday call. Ryan Alder was out in his own boat when he heard the call. "On our way back into the Berkeley Marina, we heard a panicked 'mayday, mayday, I'm in the water just off the Berkeley pier' on channel 16," said Alder, who spotted Hache's drifting sailboat and steered his boat in its direction. This reporter was on the water too — I was crewing for my friend Ronan Potage in his Newport 30, Phoenix, helping put our jib away as we motored homeward to the marina. But we were watching the Santana 22 bob suspiciously close to the hazardous abandoned pier. Something just wasn't right. I went belowdeck to check channel 16 — there was a report of a man overboard in our vicinity, but no further information. Fifteen minutes after the mayday radio call, a US Coast Guard vessel arrived, and another 15 minutes brought a helicopter to the scene, searching from the air. PATRICK WILLIAMS

t happened in an instant. One moment, Niklas Hache was scrambling across the deck of his 22foot Santana sailboat and the next he was underwater. Fighting the shock from the cold winter water, watching his boat sail away unmanned, Hache found himself adrift in San Francisco Bay. It was November 22, a sunny afternoon. Hache, a 32-year-old German, had been out for a solo Sunday sail, his third time going out by himself. He spent most of the afternoon in the waters outside the Berkeley Marina, sailing back and forth in mild winter winds. But as the afternoon progressed, clouds gathered in the sky. Around 3 p.m., Hache decided to go back home. To return to shore, Hache went forward and took down the jib. As he was walking carefully back to the cockpit, the boom swung across the boat, throwing him off balance, and he slipped, going overboard. "Suddenly, I was in the water," said Hache. "I just knew — I'm in serious trouble.'" Hache was living a boater's worst nightmare: He was separated from his boat, alone in the icy winter water, subject to the Bay's strong currents and tidal changes. On an average November day in the Bay, the water is well below 60° F, probably between 52 and 55 degrees according to the National Oceanic and Atmospheric Administration. Swimming is considered dangerous at 55 degrees. Early-stage hypothermia can set in in just a few minutes of exposure. An hour of exposure leads to unconsciousness and, from there, the outlook does not improve.

Alder's boat circled and ran sweeps for 30 minutes without sighting Hache. "We were pretty sure we'd just heard someone's last words over the radio," Alder said. "I thought, 'I hope this isn't yet another story we hear too often that ends with, if only they'd just been wearing a PFD.' " Sonia Fava, her husband Hugo and their 14-year-old daughter Carla were also out for a sail when they saw the runaway boat, positioned fairly close to their boat. Their Express 37, Frequent Flyer, motored over to the unmanned boat. They maneuvered next to Hache's boat at midship and Hugo jumped into the cockpit to investigate. Hugo, a strong sailor, saw that the boat was neat and tidy, with no evident damage, and sailed her back into the Berkeley Marina. "Carla drove their boat into the slip for the first time too," said Fava. But Hache was still missing. After 30 minutes in the water, Hache