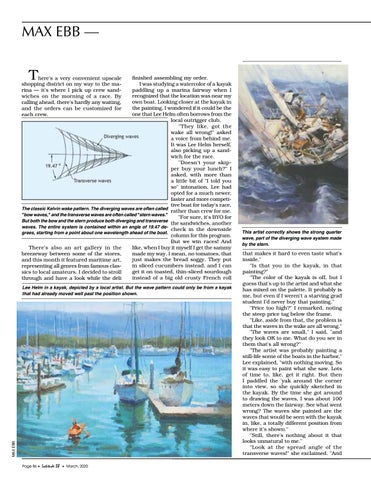 finished assembling my order. I was studying a watercolor of a kayak paddling up a marina fairway when I recognized that the location was near my own boat. Looking closer at the kayak in the painting, I wondered if it could be the one that Lee Helm often borrows from the local outrigger club. "They like, got the wake all wrong!" asked a voice from behind me. It was Lee Helm herself, also picking up a sandwich for the race. "Doesn't your skipper buy your lunch?" I asked, with more than a little bit of "I told you so" intonation. Lee had opted for a much newer, faster and more competitive boat for today's race, The classic Kelvin wake pattern. The diverging waves are often called rather than crew for me. "bow waves," and the transverse waves are often called "stern waves." "For sure, it's BYO for But both the bow and the stern produce both diverging and transverse the sandwiches, another waves. The entire system is contained within an angle of 19.47 decheck in the downside grees, starting from a point about one wavelength ahead of the boat. column for this program. But we win races! And like, when I buy it myself I get the sammy There's also an art gallery in the made my way. I mean, no tomatoes, that breezeway between some of the stores, just makes the bread soggy. They put and this month it featured maritime art, in sliced cucumbers instead, and I can representing all genres from famous clasget it on toasted, thin-sliced sourdough sics to local amateurs. I decided to stroll instead of a big old crusty French roll through and have a look while the deli here's a very convenient upscale shopping district on my way to the marina — it's where I pick up crew sandwiches on the morning of a race. By calling ahead, there's hardly any waiting, and the orders can be customized for each crew.

Lee Helm in a kayak, depicted by a local artist. But the wave pattern could only be from a kayak that had already moved well past the position shown.

This artist correctly shows the strong quarter wave, part of the diverging wave system made by the stern.

that makes it hard to even taste what's inside." "Is that you in the kayak, in that painting?" "The color of the kayak is off, but I guess that's up to the artist and what she has mixed on the palette. It probably is me, but even if I weren't a starving grad student I'd never buy that painting." "Price too high?" I remarked, noting the steep price tag below the frame. "Like, aside from that, the problem is that the waves in the wake are all wrong." "The waves are small," I said, "and they look OK to me. What do you see in them that's all wrong?" "The artist was probably painting a still-life scene of the boats in the harbor," Lee explained, "with nothing moving. So it was easy to paint what she saw. Lots of time to, like, get it right. But then I paddled the 'yak around the corner into view, so she quickly sketched in the kayak. By the time she got around to drawing the waves, I was about 100 meters down the fairway. See what went wrong? The waves she painted are the waves that would be seen with the kayak in, like, a totally different position from where it's shown." "Still, there's nothing about it that looks unnatural to me." "Look at the spread angle of the transverse waves!" she exclaimed. "And