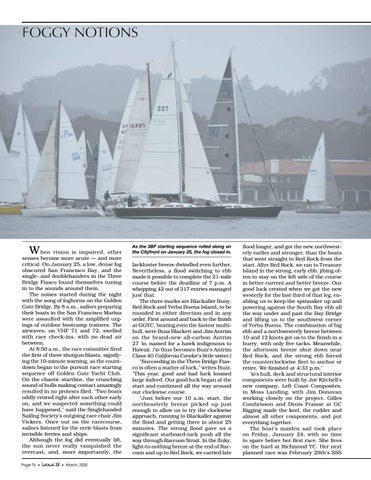 W hen vision is impaired, other

senses become more acute — and more critical. On January 25, a low, dense fog obscured San Francisco Bay, and the single- and doublehanders in the Three Bridge Fiasco found themselves tuning in to the sounds around them. The noises started during the night with the song of foghorns on the Golden Gate Bridge. By 8 a.m., sailors preparing their boats in the San Francisco Marina were assaulted with the amplified urgings of outdoor bootcamp trainers. The airwaves, on VHF 71 and 72, swelled with race check-ins, with no dead air between. At 8:50 a.m., the race committee fired the first of three shotgun blasts, signifying the 10-minute warning, as the countdown began to the pursuit race starting sequence off Golden Gate Yacht Club. On the chaotic startline, the crunching sound of hulls making contact amazingly resulted in no protests filed. "Two boats oddly retired right after each other early on, and we suspected something could have happened," said the Singlehanded Sailing Society's outgoing race chair Jim Vickers. Once out on the racecourse, sailors listened for the eerie blasts from invisible ferries and ships. Although the fog did eventually lift, the sun never really vanquished the overcast, and, more importantly, the Page 76 •

As the 3BF starting sequence rolled along on the Cityfront on January 25, the fog closed in.

lackluster breeze dwindled even further. Nevertheless, a flood switching to ebb made it possible to complete the 21-mile course before the deadline of 7 p.m. A whopping 42 out of 317 entries managed just that. The three marks are Blackaller Buoy, Red Rock and Yerba Buena Island, to be rounded in either direction and in any order. First around and back to the finish at GGYC, beating even the fastest multihull, were Buzz Blackett and Jim Antrim on the brand-new all-carbon Antrim 27 'io, named for a hawk indigenous to Hawaii. ('io thus becomes Buzz's Antrim Class 40 California Condor's little sister.) "Succeeding in the Three Bridge Fiasco is often a matter of luck," writes Buzz. "This year, good and bad luck loomed large indeed. Our good luck began at the start and continued all the way around our clockwise course. "Just before our 10 a.m. start, the northeasterly breeze picked up just enough to allow us to try the clockwise approach, running to Blackaller against the flood and getting there in about 25 minutes. The strong flood gave us a significant starboard-tack push all the way through Raccoon Strait. In the fluky, light-to-nothing breeze at the end of Raccoon and up to Red Rock, we carried late

flood longer, and got the new northwesterly earlier and stronger, than the boats that went straight to Red Rock from the start. After Red Rock, we ran to Treasure Island in the strong, early ebb, jibing often to stay on the left side of the course in better current and better breeze. Our good luck crested when we got the new westerly for the last third of that leg, enabling us to keep the spinnaker up and powering against the South Bay ebb all the way under and past the Bay Bridge and lifting us to the southwest corner of Yerba Buena. The combination of big ebb and a northwesterly breeze between 10 and 12 knots got us to the finish in a hurry, with only five tacks. Meanwhile, the afternoon breeze shut down near Red Rock, and the strong ebb forced the counterclockwise fleet to anchor or retire. We finished at 4:33 p.m." 'io's hull, deck and structural interior components were built by Joe Kitchell's new company, Left Coast Composites, in Moss Landing, with Jim Donovan working closely on the project. Gilles Combrisson and Denis Fraisse at GC Rigging made the keel, the rudder and almost all other components, and put everything together. The boat's maiden sail took place on Friday, January 24, with no time to spare before her first race. She lives on the hard at Richmond YC. Her next planned race was February 29th's SSS