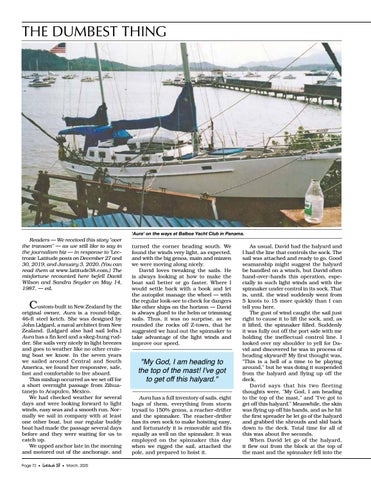 'Aura' on the ways at Balboa Yacht Club in Panama.

ustom-built in New Zealand by the original owner, Aura is a round-bilge, 46-ft steel ketch. She was designed by John Lidgard, a naval architect from New Zealand. (Lidgard also had sail lofts.) Aura has a fin keel and a skeg-hung rudder. She sails very nicely in light breezes and goes to weather like no other cruising boat we know. In the seven years we sailed around Central and South America, we found her responsive, safe, fast and comfortable to live aboard. This mishap occurred as we set off for a short overnight passage from Zihuatanejo to Acapulco, Mexico. We had checked weather for several days and were looking forward to light winds, easy seas and a smooth run. Normally we sail in company with at least one other boat, but our regular buddy boat had made the passage several days before and they were waiting for us to catch up. We upped anchor late in the morning and motored out of the anchorage, and Page 72 •

turned the corner heading south. We found the winds very light, as expected, and with the big genoa, main and mizzen we were moving along nicely. David loves tweaking the sails. He is always looking at how to make the boat sail better or go faster. Where I would settle back with a book and let the autopilot manage the wheel — with the regular look-see to check for dangers like other ships on the horizon — David is always glued to the helm or trimming sails. Thus, it was no surprise, as we rounded the rocks off Z-town, that he suggested we haul out the spinnaker to take advantage of the light winds and improve our speed.

"My God, I am heading to the top of the mast! I've got to get off this halyard." Aura has a full inventory of sails, eight bags of them, everything from storm trysail to 150% genoa, a reacher-drifter and the spinnaker. The reacher-drifter has its own sock to make hoisting easy, and fortunately it is removable and fits equally as well on the spinnaker. It was employed on the spinnaker this day when we rigged the sail, attached the pole, and prepared to hoist it.

As usual, David had the halyard and I had the line that controls the sock. The sail was attached and ready to go. Good seamanship might suggest the halyard be handled on a winch, but David often hand-over-hands this operation, especially in such light winds and with the spinnaker under control in its sock. That is, until, the wind suddenly went from 5 knots to 15 more quickly than I can tell you here. The gust of wind caught the sail just right to cause it to lift the sock, and, as it lifted, the spinnaker filled. Suddenly it was fully out off the port side with me holding the ineffectual control line. I looked over my shoulder to yell for David and discovered he was in process of heading skyward! My first thought was, "This is a hell of a time to be playing around," but he was doing it suspended from the halyard and flying up off the deck. David says that his two fleeting thoughts were, "My God, I am heading to the top of the mast," and "I've got to get off this halyard." Meanwhile, the skin was flying up off his hands, and as he hit the first spreader he let go of the halyard and grabbed the shrouds and slid back down to the deck. Total time for all of this was about five seconds. When David let go of the halyard, it flew out from the block at the top of the mast and the spinnaker fell into the