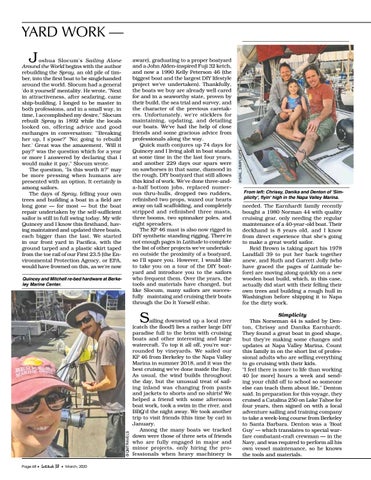 aware), graduating to a proper boatyard and a John Alden-inspired Fuji 32 ketch, and now a 1990 Kelly Peterson 46 (the biggest boat and the largest DIY lifestyle project we've undertaken). Thankfully, the boats we buy are already well cared for and in a seaworthy state, proven by their build, the sea trial and survey, and the character of the previous caretakers. Unfortunately, we're sticklers for maintaining, updating, and detailing our boats. We've had the help of close friends and some gracious advice from professionals along the way. Quick math conjures up 74 days for Quincey and I living aloft in boat stands at some time in the the last four years, and another 229 days our spars were on sawhorses in that same, diamond in the rough, DIY boatyard that still allows this kind of work. We've done three-anda-half bottom jobs, replaced numerous thru-hulls, dropped two rudders, refinished two props, waxed our hearts away on tall scaffolding, and completely stripped and refinished three masts, three booms, two spinnaker poles, and eight spreaders. The KP 46 mast is also now rigged in DIY synthetic standing rigging. There're not enough pages in Latitude to complete the list of other projects we've undertaken outside the proximity of a boatyard, so I'll spare you. However, I would like to take you on a tour of the DIY boatyard and introduce you to the sailors who frequent them. Over the years, the tools and materials have changed, but like Slocum, many sailors are succesfully maintaing and cruising their boats through the Do It Yorself ethic.

oshua Slocum's Sailing Alone Around the World begins with the author rebuilding the Spray, an old pile of timber, into the first boat to be singlehanded around the world. Slocum had a general 'do it yourself' mentality. He wrote, "Next in attractiveness, after seafaring, came ship-building. I longed to be master in both professions, and in a small way, in time, I accomplished my desire." Slocum rebuilt Spray in 1892 while the locals looked on, offering advice and good exchanges in conversation: "'Breaking her up, I s'pose?' 'No; going to rebuild her.' Great was the amazement. 'Will it pay?' was the question which for a year or more I answered by declaring that I would make it pay," Slocum wrote. The question, "Is this worth it?" may be more pressing when humans are presented with an option. It certainly is among sailors. The days of Spray, felling your own trees and building a boat in a field are long gone — for most — but the boat repair undertaken by the self-sufficient sailor is still in full swing today. My wife Quincey and I know this firsthand, having maintained and updated three boats, each bigger than the last. We started in our front yard in Pacifica, with the ground tarped and a plastic skirt taped from the toe rail of our First 23.5 (the Environmental Protection Agency, or EPA, would have frowned on this, as we're now Quincey and Mitchell re-bed hardware at Berkeley Marine Center.

ailing downwind up a local river (catch the flood!) lies a rather large DIY paradise full to the brim with cruising boats and other interesting and large watercraft. To top it all off, you're surrounded by vineyards. We sailed our KP 46 from Berkeley to the Napa Valley Marina in summer 2018, and it was the best cruising we've done inside the Bay. As usual, the wind builds throughout the day, but the unusual treat of sailing inland was changing from pants and jackets to shorts and no shirts! We helped a friend with some afternoon boat work, took a swim in the river, and BBQ'd the night away. We took another trip to visit friends (this time by car) in January. Among the many boats we tracked down were those of three sets of friends who are fully engaged in major and minor projects, only hiring the professionals when heavy machinery is

From left: Chrissy, Danika and Denton of 'Simplicity', ﬂyin' high in the Napa Valley Marina.

needed. The Earnhardt family recently bought a 1980 Norman 44 with quality cruising gear, only needing the regular maintenance of a 40-year-old boat. Their deckhand is 8 years old, and I know from direct experience that she's going to make a great world sailor. Reid Brown is taking apart his 1978 Landfall 39 to put her back together anew, and Ruth and Garrett Jolly (who have graced the pages of Latitude before) are moving along quickly on a new wooden boat build, which, in this case, actually did start with their felling their own trees and building a rough hull in Washington before shipping it to Napa for the dirty work. Simplicity This Norseman 44 is sailed by Denton, Chrissy and Danika Earnhardt. They found a great boat in good shape, but they're making some changes and updates at Napa Valley Marina. Count this family in on the short list of professional adults who are selling everything to go cruising with their kids. "I feel there is more to life than working 40 [or more] hours a week and sending your child off to school so someone else can teach them about life," Denton said. In preparation for this voyage, they cruised a Catalina 250 on Lake Tahoe for four years, then signed on with a local adventure sailing and training company to take a week-long course from Berkeley to Santa Barbara. Denton was a 'Boat Guy' — which translates to special warfare combatant-craft crewman — in the Navy, and was required to perform all his own vessel maintenance, so he knows the tools and materials.