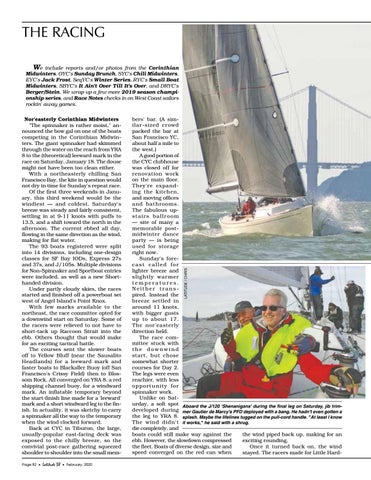 THE RACING We include reports and/or photos from the Corinthian Midwinters, OYC's Sunday Brunch, SYC's Chili Midwinters, EYC's Jack Frost, SeqYC's Winter Series, RYC's Small Boat Midwinters, SBYC's It Ain't Over Till It's Over, and DRYC's Berger/Stein. We wrap up a few more 2019 season championship series, and Race Notes checks in on West Coast sailors rockin' away games.

bers' bar. (A similar -sized crowd packed the bar at San Francisco YC, about half a mile to the west.) A good portion of the CYC clubhouse was closed off for renovation work on the main floor. They're expanding the kitchen, and moving offices and bathrooms. The fabulous upstairs ballroom — site of many a memorable postmidwinter dance party — is being used for storage right now. Sunday's forecast called for lighter breeze and slightly war mer temperatures. Neither transpired. Instead the breeze settled in around 11 knots, with bigger gusts up to about 17. The nor'easterly direction held. The race committee stuck with the downwind start, but chose somewhat shorter courses for Day 2. The legs were even reachier, with less opportunity for spinnaker work. Unlike on Saturday, a soft spot Aboard the J/120 'Shenanigans' during the ﬁnal leg on Saturday, jib trimdeveloped during mer Gautier de Marcy's PFD deployed with a bang. He hadn't even gotten a the leg to YRA 8. splash. Maybe the lifelines tugged on the pull-cord handle. "At least I know The wind didn't it works," he said with a shrug. die completely, and boats could still make way against the the wind piped back up, making for an ebb. However, the slowdown compressed exciting rounding. the fleet. Boats of diverse design, size and Once it turned back on, the wind speed converged on the red can when stayed. The racers made for Little HardLATITUDE / CHRIS

Nor'easterly Corinthian Midwinters "The spinnaker is rather moist," announced the bow gal on one of the boats competing in the Corinthian Midwinters. The giant spinnaker had skimmed through the water on the reach from YRA 8 to the (theoretical) leeward mark in the race on Saturday, January 18. The douse might not have been too clean either. With a northeasterly chilling San Francisco Bay, the kite in question would not dry in time for Sunday's repeat race. Of the first three weekends in January, this third weekend would be the windiest — and coldest. Saturday's breeze was steady and fairly consistent, settling in at 9-11 knots with puffs to 13.5, and a shift toward the north in the afternoon. The current ebbed all day, flowing in the same direction as the wind, making for flat water. The 93 boats registered were split into 14 divisions, including one-design classes for SF Bay IODs, Express 27s and 37s, and J/105s. Multiple divisions for Non-Spinnaker and Sportboat entries were included, as well as a new Shorthanded division. Under partly cloudy skies, the races started and finished off a powerboat set west of Angel Island's Point Knox. With few marks available to the northeast, the race committee opted for a downwind start on Saturday. Some of the racers were relieved to not have to short-tack up Raccoon Strait into the ebb. Others thought that would make for an exciting tactical battle. The courses sent the slower boats off to Yellow Bluff (near the Sausalito Headlands) for a leeward mark and faster boats to Blackaller Buoy (off San Francisco's Crissy Field) then to Blossom Rock. All converged on YRA 8, a red shipping channel buoy, for a windward mark. An inflatable temporary beyond the start-finish line made for a 'leeward' mark and a short windward leg to the finish. In actuality, it was sketchy to carry a spinnaker all the way to the temporary when the wind clocked forward. Back at CYC in Tiburon, the large, usually-popular east-facing deck was exposed to the chilly breeze, so the convivial post-race gathering squeezed shoulder to shoulder into the small mem-