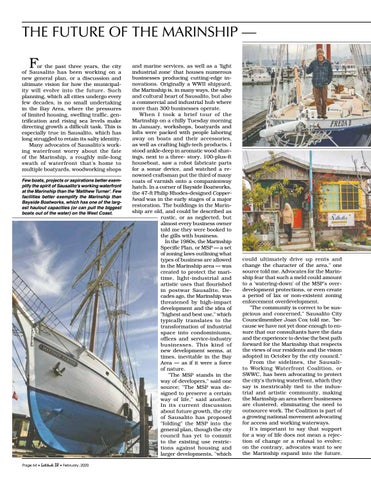 THE FUTURE OF THE MARINSHIP — F

or the past three years, the city of Sausalito has been working on a new general plan, or a discussion and ultimate vision for how the municipality will evolve into the future. Such planning, which all cities undergo every few decades, is no small undertaking in the Bay Area, where the pressures of limited housing, swelling traffic, gentrification and rising sea levels make directing growth a difficult task. This is especially true in Sausalito, which has long struggled to retain its salty identity. Many advocates of Sausalito's working waterfront worry about the fate of the Marinship, a roughly mile-long swath of waterfront that's home to multiple boatyards, woodworking shops Few boats, projects or aspirations better exemplify the spirit of Sausalito's working waterfront at the Marinship than the 'Matthew Turner'. Few facilities better exemplify the Marinship than Bayside Boatworks, which has one of the largest haulout capacities (or can pull the biggest boats out of the water) on the West Coast.

and marine services, as well as a 'light industrial zone' that houses numerous businesses producing cutting-edge innovations. Originally a WWII shipyard, the Marinship is, in many ways, the salty and cultural heart of Sausalito, but also a commercial and industrial hub where more than 300 businesses operate. When I took a brief tour of the Marinship on a chilly Tuesday morning in January, workshops, boatyards and lofts were packed with people laboring away on boats and their accessories, as well as crafting high-tech products. I stood ankle-deep in aromatic wood shavings, next to a three- story, 100-plus-ft houseboat, saw a robot fabricate parts for a sonar device, and watched a renowned craftsman put the third of many coats of varnish onto a companionway hatch. In a corner of Bayside Boatworks, the 47-ft Philip Rhodes-designed Copperhead was in the early stages of a major restoration. The buildings in the Marinship are old, and could be described as rustic, or as neglected, but almost every business owner told me they were booked to the gills with business. In the 1980s, the Marinship Specific Plan, or MSP — a set of zoning laws outlining what types of business are allowed in the Marinship area — was created to protect the maritime, light-industrial and artistic uses that flourished in postwar Sausalito. Decades ago, the Marinship was threatened by high-impact development and the idea of "highest and best use," which typically translates to the transformation of industrial space into condominiums, offices and service-industry businesses. This kind of new development seems, at times, inevitable in the Bay Area — as if it were a force of nature. "The MSP stands in the way of developers," said one source; "The MSP was designed to preserve a certain way of life," said another. In its current discussion about future growth, the city of Sausalito has proposed "folding" the MSP into the general plan, though the city council has yet to commit to the existing use restrictions against housing and larger developments, "which

could ultimately drive up rents and change the character of the area," one source told me. Advocates for the Marinship fear that such a meld could amount to a 'watering-down' of the MSP's overdevelopment protections, or even create a period of lax or non-existent zoning enforcement overdevelopment. "The community is correct to be suspicious and concerned," Sausalito City Councilmember Joan Cox told me, "because we have not yet done enough to ensure that our consultants have the data and the experience to devise the best path forward for the Marinship that respects the views of our residents and the vision adopted in October by the city council." From the sidelines, the Sausalito Working Waterfront Coalition, or SWWC, has been advocating to protect the city's thriving waterfront, which they say is inextricably tied to the industrial and artistic community, making the Marinship an area where businesses are clustered, eliminating the need to outsource work. The Coalition is part of a growing national movement advocating for access and working waterways. It's important to say that support for a way of life does not mean a rejection of change or a refusal to evolve; on the contrary, advocates want to see the Marinship expand into the future.