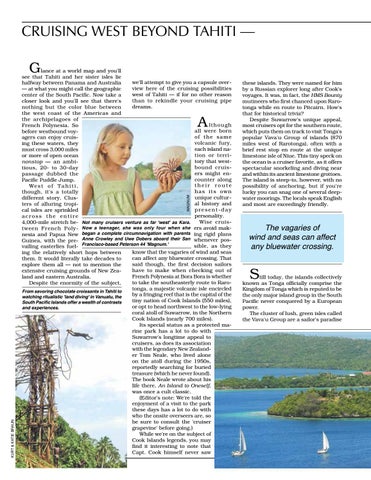 lance at a world map and you'll see that Tahiti and her sister isles lie we'll attempt to give you a capsule overhalfway between Panama and Australia view here of the cruising possibilities — at what you might call the geographic west of Tahiti — if for no other reason center of the South Pacific. Now take a than to rekindle your cruising pipe closer look and you'll see that there's dreams. nothing but the color blue between the west coast of the Americas and the archipelagoes of lthough French Polynesia. So all were born before westbound voyof the same agers can enjoy cruisvolcanic fury, ing these waters, they each island namust cross 3,000 miles tion or terrior more of open ocean tory that westnonstop — an ambibound cruistious, 20- to 30-day ers might enpassage dubbed the counter along Pacific Puddle Jump. their route We s t o f T a h i t i , has its own though, it's a totally unique culturdifferent story. Clusal history and ters of alluring tropipresent-day cal isles are sprinkled personality. across the entire Wise cruis4,000-mile stretch be- Not many cruisers venture as far 'west' as Kara. tween French Poly- Now a teenager, she was only four when she ers avoid maknesia and Papua New began a complete circumnavigation with parents ing rigid plans Guinea, with the pre- Anne Crowley and Uwe Dobers aboard their San whenever possible, as they vailing easterlies fuel- Francisco-based Peterson 44 'Magnum.' know that the vagaries of wind and seas ing the relatively short hops between can affect any bluewater crossing. That them. It would literally take decades to said though, the first decision sailors explore them all — not to mention the have to make when checking out of extensive cruising grounds of New ZeaFrench Polynesia at Bora Bora is whether land and eastern Australia. to take the southeasterly route to RaroDespite the enormity of the subject, tonga, a majestic volcanic isle encircled From savoring chocolate croissants in Tahiti to by a fringing reef that is the capital of the watching ritualistic 'land diving' in Vanuatu, the tiny nation of Cook Islands (550 miles), South Paciﬁc Islands offer a wealth of contrasts or opt to head northwest to the low-lying and experiences. coral atoll of Suwarrow, in the Northern Cook Islands (nearly 700 miles). Its special status as a protected marine park has a lot to do with Suwarrow's longtime appeal to cruisers, as does its association with the legendary New Zealander Tom Neale, who lived alone on the atoll during the 1950s, reportedly searching for buried treasure (which he never found). The book Neale wrote about his life there, An Island to Oneself, was once a cult classic. (Editor's note: We're told the enjoyment of a visit to the park these days has a lot to do with who the onsite overseers are, so be sure to consult the 'cruiser grapevine' before going.) While we're on the subject of Cook Islands legends, you may find it interesting to note that Capt. Cook himself never saw ADRIANA BERMEO

these islands. They were named for him by a Russian explorer long after Cook's voyages. It was, in fact, the HMS Bounty mutineers who first chanced upon Rarotonga while en route to Pitcairn. How's that for historical trivia? Despite Suwarrow's unique appeal, most cruisers opt for the southern route, which puts them on track to visit Tonga's popular Vava'u Group of islands (870 miles west of Rarotonga), often with a brief rest stop en route at the unique limestone isle of Niue. This tiny speck on the ocean is a cruiser favorite, as it offers spectacular snorkeling and diving near and within its ancient limestone grottoes. The island is steep-to, however, with no possibility of anchoring, but if you're lucky you can snag one of several deepwater moorings. The locals speak English and most are exceedingly friendly.

The vagaries of wind and seas can affect any bluewater crossing.

till today, the islands collectively known as Tonga officially comprise the Kingdom of Tonga which is reputed to be the only major island group in the South Pacific never conquered by a European power. The cluster of lush, green isles called the Vava'u Group are a sailor's paradise