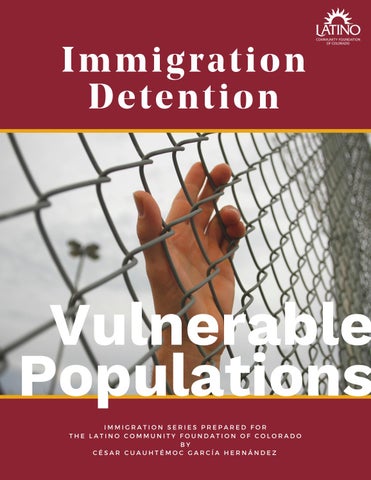 he immigration detention systemâ&#x20AC;&#x2122;s population is large and diverse. Roughly half a million men, women, and children are confined annually while they wait to learn whether they will be allowed to remain in the United States. Within this large group are some people who are particularly vulnerable to abuse within detention

LGBT There are no reliable data on the number of LGBT people held in immigration detention at any given moment. In 2015, ICE reported that roughly 65 of the 30,000 people it held daily were transgender,1 but figures about the broader LGBT community are unavailable. Several major impediments exist to gathering reliable data on the LGBT detainee population. First, many LGBT individuals come to the United States fleeing violence, verbal abuse, or other types of persecution, making them reluctant to sensitive personal information. Second, they are unlikely to develop trusting relationships with the very people responsible for their confinement. Detainees who are suspected of being LGBT are sometimes subjected to abuse from guards or other detainees because of their sexual orientation. Immigration and Customs Enforcement (ICE) records from 2008 to 2013 included

almost 200 reports of abuse involving sexual orientation or gender identity. Given detainees’ reluctance to seek assistance from ICE, there is reason to believe that the actual number of concerning situations experienced by LGBT detainees is higher. The abuse varies. Some detainees complained about verbal humiliation by guards. Others reported instances of sexual abuse by guards or other detainees.2 Concerns about sexual abuse and assault inside immigration detention centers are not new. In its 2009 report, the National Prison Rape Commission wrote, “As a group, immigration detainees are especially vulnerable to sexual abuse and its effects while detained due to social, cultural, and language isolation; poor understanding of U.S. culture and the subculture of U.S. prisons; and the oftentraumatic experiences they have endured in their culture of origin.” 3 Other research supports this troubling characterization. The federal government’s auditing agency, the Government Accountability Office (GAO), found 215 sexual abuse or assault allegations made by detainees to ICE in less than four years from October 2009 to March 2013. Here again there is reason for skepticism that this accurately measures the full extent of detainees’ experiences because the GAO noted that detention center staff failed to follow ICE’s procedures for handling sexual abuse and assault complaints. Subsequently, ICE instituted clearer protocols for reporting sexual abuse and assault allegations, but the GAO found that those were not followed consistently.4

Photo by Juan Carlos Llorca/AP. An unidentified Guatemalan woman stands inside a dormitory in the Artesia Family Residential Center.

GRUBERG, supra note 2, at 5. U.S. Immigration and Customs Enforcement, Policy 11065.1, Review of the Use of Segregation for ICE Detainees § 5.2 (Sept. 4, 2013), available at https://www.ice.gov/doclib/detention-reform/pdf/segregation_directive.pdf.

Due to external pressure from advocates, unflattering media coverage, and internal critiques by government oversight bodies, ICE is aware of the numerous concerns about the treatment of LGBT detainees. In response, ICE contracted with the city of Sana Ana, California to dedicate a wing in the city jail exclusively to LGBT immigration detainees. 7 The facility could house as many as sixty-four people under the supervision of staff trained by an immigrants’ rights organization and academics to better grapple with the detainees’ needs.8 While many detainees described it as a “significant improvement” from prior detention options, problems persisted. One visitor noted that it was unclear whether the staff had received the required training and reported observing staff berate transgender detainees who identify as female by instructing them to use their “male voice.” 9 The dedicated Santa Ana facility proved short-lived. In late 2016, city officials notified ICE that they planned to sever ties to the agency by 2020. In February 2017, ICE informed the city that it would transfer all detainees to other facilities by May. 10 ICE continues to operate a similar facility at the Prairieland Detention Center in Texas, where roughly three dozen beds are set aside in a separate unit for transgender detainees.11 Among LGBT detainees, transgender detainees are uniquely exploitable. The GAO found that twenty percent of the sexual abuse or assault cases it independently substantiated were perpetrated against transgender detainees.12 In addition, they are often unable to access hormone therapy started prior to confinement even though this violates ICE’s own unambiguous detention standards.13

Asylum-seekers Under international and domestic law, a person can request asylum only from within the country in which they seek safe harbor. It is not possible to request asylum in the United States without coming here. Nor is there any requirement under international or domestic law to arrive through lawful means. On the contrary, international norms recognize that fleeing for one’s safety infrequently presents the opportunity to wait for formal immigration processes to unravel. For these reasons, the UNHCR describes a request for asylum as “not an unlawful act” and adds, “detention of asylum-seekers should normally be avoided and be a measure of last resort.” 14

Despite the international norm against

seekers, people who come to the

protection from violence represent another key segment of the immigration detention population. The most recent data publicly available indicates that

Homeland Security (DHS), ICE’s parent agency, confines tens of thousands of asylum-seekers annually and that the number has grown.

That is a substantial increase from the

10,742 detained in fiscal year 2009 and the 15,769 detained the year before.16 Some detained asylum-seekers are confined in family units. In particular, mothers who arrive in the United States with children and request asylum are frequently kept in dedicated family immigration detention centers. Other family

Individuals who successfully apply for asylum must prove a well-founded fear of persecution. Detention compounds the trauma of past persecution and the fear of future reprisals. A 2003 study published in The Lancet, for example, found that the length of time an asylum seeker was detained in the United States significantly correlated to increased symptoms of anxiety, depression, and post-traumatic stress disorder. As the authors reported, symptoms “worsened with time in detention and improved on release.”17 Well before the asylum determination process runs its course, asylum seekers frequently spend time inside temporary holding cells run by DHS’s Border Patrol unit, a division of the Customs and Border Protection agency. Often described as hieleras because of their customary cold temperature, these cells resemble large kennels or typical jail cells. The kennel-like structures are made of chain-link fencing while the cell configurations are concrete or cinder block-walled units that can only be accessed through a locked steel door.

Conditions inside Border Patrol facilities are so lacking basic standards that a federal court described them as “egregious.” 18 Later that same court ordered the appointment of a monitor to ensure compliance with a 1997 agreement regarding conditions of confinement for children.19 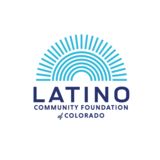 Part of a series on immigration detention in the United States, this publication focuses on vulnerable populations such as those who identif...

Part of a series on immigration detention in the United States, this publication focuses on vulnerable populations such as those who identif...