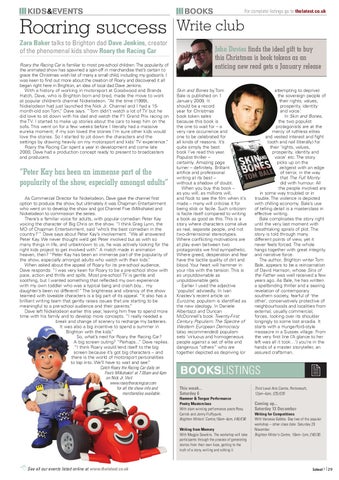 Zara Baker talks to Brighton dad Dave Jenkins, creator of the phenomenal kids show Roary the Racing Car Roary the Racing Car is familiar to most pre-school children. The popularity of the animated show has spawned a spin-off in merchandise that’s certain to grace the Christmas wish list of many a small child, including my godson’s. I was keen to find out more about the creation of Roary and discovered it all began right here in Brighton, an idea of local dad Dave Jenkins. With a history of working in motorsport at Goodwood and Brands Hatch, Dave, who is Brighton born and bred, made the move to work at popular children’s channel Nickelodeon. “At the time (1999), Nickelodeon had just launched the Nick Jr. Channel and I had a 15month-old son Tom,” Dave says. “Tom didn’t watch a lot of TV but he did love to sit down with his dad and watch the F1 Grand Prix racing on the TV. I started to make up stories about the cars to keep him on the sofa. This went on for a few weeks before I literally had a massive eureka moment; if my son loved the stories I’m sure other kids would love the stories. So I started to jot down the characters and the settings by drawing heavily on my motorsport and kids’ TV experience.” Roary the Racing Car spent a year in development and come late 2000, Dave had a production concept ready to present to broadcasters and producers.

“Peter Kay has been an immense part of the popularity of the show, especially amongst adults” As Commercial Director for Nickelodeon, Dave gave the channel first option to produce the show, but ultimately it was Chapman Entertainment who went on to develop the show and got Channel Five (Milkshake) and Nickelodeon to commission the series. There’s a familiar voice for adults, with popular comedian Peter Kay voicing the character of Big Chris on the show. “I think Greg Lynn, the MD of Chapman Entertainment, said ‘who’s the best comedian in the country?’” Dave says about Peter Kay’s involvement. “We all answered Peter Kay. We never thought we’d get Peter involved but as with so many things in life, and unbeknown to us, he was actively looking for the right kids project to get involved with.” A match made in animation heaven, then? “Peter Kay has been an immense part of the popularity of the show, especially amongst adults who watch with their kids.” When asked about the appeal of Roary for its pre-school audience, Dave responds: “I was very keen for Roary to be a pre-school show with pace, action and thrills and spills. Most pre-school TV is gentle and soothing, but I wanted something that reflected my own experience with my own toddler who was a typical bang and crash boy... my daughter’s been no different!” The brightness and vibrancy of the show teamed with loveable characters is a big part of its appeal. “It also has a brilliant writing team that gently raises issues that are starting to be meaningful to a pre-school audience and their parents.” Dave left Nickelodeon earlier this year, leaving him free to spend more time with his family and to develop more concepts. “I really needed a break and change of scenery to recharge my batteries. It was also a big incentive to spend a summer in Brighton with the kids.” So, what’s next for Roary the Racing Car? A big screen outing? “Perhaps...” Dave replies. “I think Roary would lend itself to the big screen because it’s got big characters – and there is the world of motorsport personalities to tap into. We’ll have to wait and see.” Catch Roary the Racing Car daily on Five’s Milkshake! at 7.05am and 4pm on Nick Jr. Visit www.roarytheracingcar.com for all the show info and merchandise available.

For complete listings go to thelatest.co.uk

John Davies finds the ideal gift to buy this Christmas is book tokens as an enticing new read gets a January release Skin and Bones by Tom Bale is published on 1 January 2009. It should be a record year for Christmas book token sales because this book is the one to wait for – a very rare occurrence and one to be celebrated for all kinds of reasons. It’s quite simply the best book I’ve read this year. Populist thriller – certainly. Amazing page turner – definitely. Brilliant artifice and professional writing at its best – without a shadow of doubt. When you buy this book – as you will, as millions will, and flock to see the film when it’s made – many will criticise it for being slick or facile. Such criticism is facile itself compared to writing a book as good as this. This is a story where characters come alive as real, separate people, and not two-dimensional stereotypes. Where conflicting motivations are at play even between two protagonists we find sympathetic. Where greed, desperation and fear have the tactile quality of dirt and blood. Your heart will hammer in your ribs with the tension. This is as unputdownable as unputdownable gets. Earlier I used the adjective ‘populist’ advisedly. In Ivan Krastev’s recent article on Eurozine, populism is identified as the new ideology. In Daniele Albertazzi and Duncan McDonnell’s book Twenty-First Century Populism: The Spectre of Western European Democracy (also recommended) populism sets ‘virtuous and homogeneous people against a set of elite and dangerous “others” who are together depicted as depriving (or

BOOKSLISTINGS This week... Saturday 6 Hammer & Tongue Performance Poetry Masterclass With slam winning performance poets Rosy Carrick and Jonny Fluffypunk. Brighton Writers’ Centre,10am–4pm, £40/£30 Writing from Memory With Maggie Sawkins. The workshop will take participants through the process of generating stories from their own lives, getting to the truth of a story, writing and editing it.

attempting to deprive) the sovereign people of their rights, values, prosperity, identity and voice.’ In Skin and Bones, the two populist protagonists are at the mercy of ruthless elites and vested interest and fight tooth and nail (literally) for their ‘rights, values, prosperity, identity and voice’ etc. The story picks up on the zeitgeist with an edge of terror, in the way that The Full Monty did with humour. All the people involved are in some way troubled or in trouble. The violence is depicted with chilling economy. Bale’s use of telling detail is a masterclass in effective writing. Bale complicates the story right until the very last moment with breathtaking spirals of plot. The story is told through many different points of view, yet it never feels forced. The whole hangs together with great integrity and narrative force. The author, Brighton writer Tom Bale, appears to be a reincarnation of David Harrison, whose Sins of the Father was well received a few years ago. As Bale, he has written a spellbinding thriller and a searing revelation of contemporary southern society, fearful of ‘the other’, conservatively protective of neighbourhoods and localities from external, usually commercial, forces, looking over its shoulder longingly to some lost arcadia. It starts with a Hungerford-style massacre in a Sussex village. From the very first line (‘A glance to her left was all it took…’) you’re in the hands of a master storyteller, an assured craftsman. 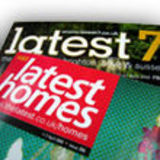