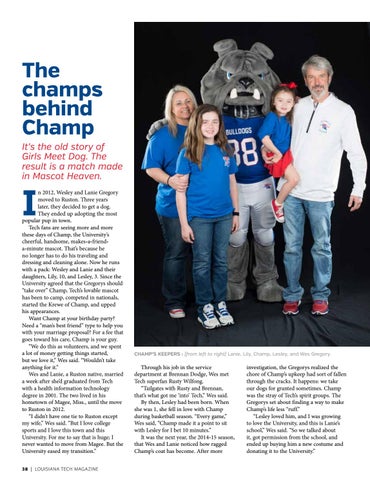 The champs behind Champ It’s the old story of Girls Meet Dog. The result is a match made in Mascot Heaven.

n 2012, Wesley and Lanie Gregory moved to Ruston. Three years later, they decided to get a dog. They ended up adopting the most popular pup in town. Tech fans are seeing more and more these days of Champ, the University’s cheerful, handsome, makes-a-frienda-minute mascot. That’s because he no longer has to do his traveling and dressing and cleaning alone. Now he runs with a pack: Wesley and Lanie and their daughters, Lily, 10, and Lesley, 3. Since the University agreed that the Gregorys should “take over” Champ, Tech’s lovable mascot has been to camp, competed in nationals, started the Krewe of Champ, and upped his appearances. Want Champ at your birthday party? Need a “man’s best friend” type to help you with your marriage proposal? For a fee that goes toward his care, Champ is your guy. “We do this as volunteers, and we spent a lot of money getting things started, but we love it,” Wes said. “Wouldn’t take anything for it.” Wes and Lanie, a Ruston native, married a week after she’d graduated from Tech with a health information technology degree in 2001. The two lived in his hometown of Magee, Miss., until the move to Ruston in 2012. “I didn’t have one tie to Ruston except my wife,” Wes said. “But I love college sports and I love this town and this University. For me to say that is huge; I never wanted to move from Magee. But the University eased my transition.” 38 | LOUISIANA TECH MAGAZINE

Through his job in the service department at Brennan Dodge, Wes met Tech superfan Rusty Wilfong. “Tailgates with Rusty and Brennan, that’s what got me ‘into’ Tech,” Wes said. By then, Lesley had been born. When she was 1, she fell in love with Champ during basketball season. “Every game,” Wes said, “Champ made it a point to sit with Lesley for I bet 10 minutes.” It was the next year, the 2014-15 season, that Wes and Lanie noticed how ragged Champ’s coat has become. After more

investigation, the Gregorys realized the chore of Champ’s upkeep had sort of fallen through the cracks. It happens: we take our dogs for granted sometimes. Champ was the stray of Tech’s spirit groups. The Gregorys set about finding a way to make Champ’s life less “ruff.” “Lesley loved him, and I was growing to love the University, and this is Lanie’s school,” Wes said. “So we talked about it, got permission from the school, and ended up buying him a new costume and donating it to the University.”