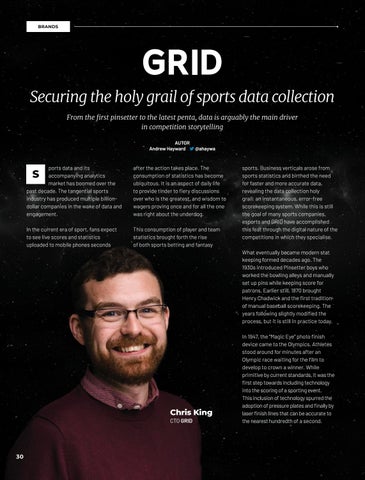 Securing the holy grail of sports data collection From the first pinsetter to the latest penta, data is arguably the main driver in competition storytelling AUTOR Andrew Hayward ď&amp;#x201A;&amp;#x2122; @ahaywa

ports data and its accompanying analytics market has boomed over the past decade. The tangential sports industry has produced multiple billiondollar companies in the wake of data and engagement.

after the action takes place. The consumption of statistics has become ubiquitous. It is an aspect of daily life to provide tinder to fiery discussions over who is the greatest, and wisdom to wagers proving once and for all the one was right about the underdog.

In the current era of sport, fans expect to see live scores and statistics uploaded to mobile phones seconds

sports. Business verticals arose from sports statistics and birthed the need for faster and more accurate data, revealing the data collection holy grail: an instantaneous, error-free scorekeeping system. While this is still the goal of many sports companies, esports and GRID have accomplished this feat through the digital nature of the competitions in which they specialise. What eventually became modern stat keeping formed decades ago. The 1930s introduced Pinsetter boys who worked the bowling alleys and manually set up pins while keeping score for patrons. Earlier still, 1870 brought Henry Chadwick and the first tradition of manual baseball scorekeeping. The years following slightly modified the process, but it is still in practice today.

In 1947, the â&amp;#x20AC;&amp;#x153;Magic Eyeâ&amp;#x20AC;? photo finish device came to the Olympics. Athletes stood around for minutes after an Olympic race waiting for the film to develop to crown a winner. While primitive by current standards, it was the first step towards including technology into the scoring of a sporting event. This inclusion of technology spurred the adoption of pressure plates and finally by laser finish lines that can be accurate to the nearest hundredth of a second.

THE ESPORTS JOURNAL is a publication focused on an in-depth discussion and analysis of the global esports industry. It’ll be distributed at the best B2B events attended by the main stakeholders and executives from in and around the industry; and will showcase some of the main companies, personalities, trends and events. The Esports Journal will be available in print and digital formats. 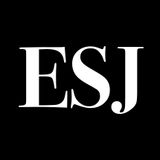