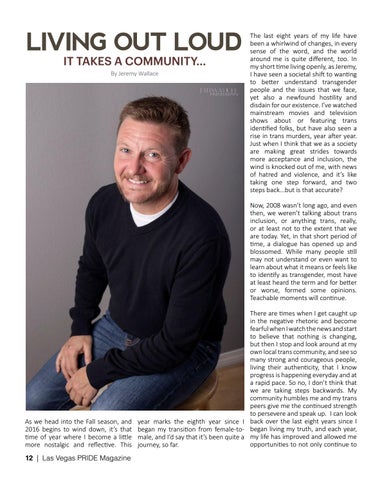 LIVING OUT LOUD IT TAKES A COMMUNITY... By Jeremy Wallace

The last eight years of my life have been a whirlwind of changes, in every sense of the word, and the world around me is quite different, too. In my short time living openly, as Jeremy, I have seen a societal shift to wanting to better understand transgender people and the issues that we face, yet also a newfound hostility and disdain for our existence. I’ve watched mainstream movies and television shows about or featuring trans identified folks, but have also seen a rise in trans murders, year after year. Just when I think that we as a society are making great strides towards more acceptance and inclusion, the wind is knocked out of me, with news of hatred and violence, and it’s like taking one step forward, and two steps back...but is that accurate? Now, 2008 wasn’t long ago, and even then, we weren’t talking about trans inclusion, or anything trans, really, or at least not to the extent that we are today. Yet, in that short period of time, a dialogue has opened up and blossomed. While many people still may not understand or even want to learn about what it means or feels like to identify as transgender, most have at least heard the term and for better or worse, formed some opinions. Teachable moments will continue.

As we head into the Fall season, and 2016 begins to wind down, it’s that time of year where I become a little more nostalgic and reflective. This 12 | Las Vegas PRIDE Magazine

There are times when I get caught up in the negative rhetoric and become fearful when I watch the news and start to believe that nothing is changing, but then I stop and look around at my own local trans community, and see so many strong and courageous people, living their authenticity, that I know progress is happening everyday and at a rapid pace. So no, I don’t think that we are taking steps backwards. My community humbles me and my trans peers give me the continued strength to persevere and speak up. I can look year marks the eighth year since I back over the last eight years since I began my transition from female-to- began living my truth, and each year, male, and I’d say that it’s been quite a my life has improved and allowed me opportunities to not only continue to journey, so far.

The TransPride and Holiday Issue