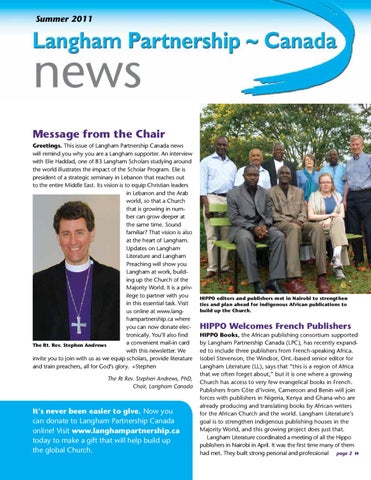 news Message from the Chair Greetings. This issue of Langham Partnership Canada news will remind you why you are a Langham supporter. An interview with Elie Haddad, one of 83 Langham Scholars studying around the world illustrates the impact of the Scholar Program. Elie is president of a strategic seminary in Lebanon that reaches out to the entire Middle East. Its vision is to equip Christian leaders in Lebanon and the Arab world, so that a Church that is growing in number can grow deeper at the same time. Sound familiar? That vision is also at the heart of Langham. Updates on Langham Literature and Langham Preaching will show you Langham at work, building up the Church of the Majority World. It is a privilege to partner with you in this essential task. Visit us online at www.langhampartnership.ca where you can now donate electronically. You’ll also find a convenient mail-in card The Rt. Rev. Stephen Andrews with this newsletter. We invite you to join with us as we equip scholars, provide literature and train preachers, all for God’s glory. +Stephen The Rt Rev. Stephen Andrews, PhD, Chair, Langham Canada

It’s never been easier to give. Now you can donate to Langham Partnership Canada online! Visit www.langhampartnership.ca today to make a gift that will help build up the global Church.

HIPPO editors and publishers met in Nairobi to strengthen ties and plan ahead for indigenous African publications to build up the Church.

HIPPO Welcomes French Publishers HIPPO Books, the African publishing consortium supported by Langham Partnership Canada (LPC), has recently expanded to include three publishers from French-speaking Africa. Isobel Stevenson, the Windsor, Ont.-based senior editor for Langham Literature (LL), says that “this is a region of Africa that we often forget about,” but it is one where a growing Church has access to very few evangelical books in French. Publishers from Côte d’Ivoire, Cameroon and Benin will join forces with publishers in Nigeria, Kenya and Ghana who are already producing and translating books by African writers for the African Church and the world. Langham Literature’s goal is to strengthen indigenous publishing houses in the Majority World, and this growing project does just that. Langham Literature coordinated a meeting of all the Hippo publishers in Nairobi in April. It was the first time many of them had met. They built strong personal and professional page 2 8

bonds within the group and with Zondervan Publishers, who will distribute HIPPO books in the West. The consortium is slowly developing into a true partnership. Langham Partnership provides Isobel’s editing, writing and publishing expertise to African publishers, as they build up their ability to help create and publish theological books that are both excellent and accessible to African readers.“The energy in the room made me want to dance,” says Isobel, “and it gave me renewed energy for my work. Such books will also benefit us in the West, as we get an opportunity to be enriched by learning more about our faith from the perspective of our brothers and sisters in Africa.” To learn more about HIPPO books, visit www.hippobooks.org. n

Interview With A Scholar Elie Haddad is a Langham Scholar, supported in part by Langham Canada (LPC). He is in Toronto this summer, working on his studies. He spoke to LPC about his work and his time with Langham.

Elie, what is the nature of your PhD studies? I am working in the area of a missional ecclesiology for the local Baptist church in Lebanon. I do this work through the International Baptist Theological Seminary in Prague, which is an English speaking school that serves Europe and the Middle East.

What has it meant to you to be a Langham Scholar? It has enabled me to enrol in this program. This is extremely important for my position as president of the Arab Baptist Theological Seminary. The theological training is essential. The networking that has come out of Langham has been amazing. Part of my role as president of the seminary is to make connections. Chris Wright often comes to Lebanon, and it has been a great connection.

It sounds like your work with Langham has been more than simply as a scholar? Langham has been very influential in the life of the seminary. We’re a small school, and our students often come

from a non-Christian background. Imagine the huge responsibility that we have just in developing faculty to sustain the ministry. The language of instruction is Arabic so relying on missionary faculty is no longer enough. It is essential for us to develop local faculty, and that’s just on the scholarship side. On the publishing side, the scarcity of Arabic resources is a big challenge. That’s another dimension where Langham has been very influential, and more is needed. The projects Langham has done with page 3 8

Chris Wright Presents Langham Vision in Vancouver Chris Wright, international director of Langham Partnership International, spent time in Vancouver recently, teaching a summer school course at Regent College. Chris offered a free public lecture on “Evil, Suffering, and the God We Don’t Understand,” inspired by one of his most recent books. More than 200 people attended the lecture, which included a presentation about Langham Partnership, and specifically, its growing presence in Canada. Thanks Chris! n

Langham and the Beirut Benchmarks In March of this year, 21 leaders of evangelical seminaries in the majority world – including several Langham scholars, now heads of seminaries – met at the Arab Baptist Theological Seminary in Beirut to craft the Beirut Benchmarks. The Benchmarks set forth a common agreement on the qualities of an acceptable doctorate, no matter where it was awarded. Chris Wright, international director of Langham Partnership International, called the gathering a “historic milestone along the road to making our Langham vision a reality. The long-term aim of the Langham Scholars programme is to raise the standards of seminaries around the world, so they can train their own teachers to the highest levels. This agreement by senior evangelical theological educators from every continent helps do just that.” n

Egypt benefit us as well. Langham has resourced our library many times, and contributed to publishing projects. Last year we published four books at our seminary.

Can you tell Canadians about the Church in Lebanon today? The context is challenging, but we are part of the solution. Evangelical Christians represent one in 1000 people in Lebanon. Our seminary serves the wider evangelical circle. God is actively at work in our region, definitely. God is really igniting a new passion and vision among young people. n

from 198 countries, including 30 Langham scholars. “It is clear that the fulfillment of one part of John Stott’s vision, in equipping such leaders through the Langham Scholar programme, has borne fruit in another area of his vision – in commitment to the cause of world mission through the Lausanne movement,” said Chris Wright. n

Langham Literature Equips Majority World Church “Africa has a passion for its Church,” says Isobel Stevenson. Isobel saw it firsthand when she worked on the Africa Bible Commentary in Nairobi. Three young men from Sudan, in town for an HIV/AIDS workshop, asked Isobel to give them even some of the unfinished text, saying it was desperately needed Langham Partto help pastors and people in nership is on Sudan understand the Bible. YouTube. Visit This same craving is felt by believers throughout the Majorwww.youtube.com and ity World. They need texts by enter Langham Parttheologians who are deeply nership into the search rooted in their own cultures in engine. Sit back and order to explain God’s word to enjoy a variety of short their cultures. Seminaries in the videos about Langham Majority World need theological Partnership. Send links texts that address their particular to friends to introduce concerns, not North American them to a ministry that concerns. Recognizing this need, is helping the Church of the Asia Theological Association the Majority World grow has invited Isobel to attend a in strength, even as it writer’s workshop in Kuala Lumgrows in number. pur in July. She will be encouraging theologians from places like India, the Philippines, Malaysia and Singapore and helping them to develop their ability to produce books that will build up the Church in their countries. “One of the things I really like about working with Langham,” says Isobel, “is that we are not there to tell people in the Majority World what to do, but rather to help them to carry out projects they have identified as necessary. In Africa, for example, one of the reasons I am working with the Hippo consortium is they cannot yet find an experienced African editor to take on this role. Part of my job is to find and train the person to replace me.” n

form local preacher’s groups to meet regularly for support, encouragement and further training. Langham Preaching views the training of preachers as a process not an event. Preacher’s groups are viewed as vital and just as important as It’s all in the partnership. Langham Preaching (LP) the seminars. partners with national Church leaders to nurture indigenous With the right care and support, these local groups grow preaching movements for pastors, and lay preachers, in 50 into national movements, building a strong, countries – and growing – around the and Biblically-sound national Church. “I’ve world. It begins with week-long seminars Please pray for preaching been preaching many messages, but someoffered at three levels. Preachers, someprograms coming up in: times out of context. I went to Bible schools times working alongside their brothers but they never did me good as now. I and sisters from other denominations for • Rwanda • Pakistan • Nigeria • Uganda usually dealt only with the New Testament. the first time, learn research, prepara• Liberia • Indonesia Now I know about preparing a message, tion and preaching skills during intensive • Kenya • Vanuatu taking the text in its context, whether it be classes. They are provided with resources, • Solomon • Bolivia Old Testament or New,” said Janet Koroma, including study books, to help them Islands • Turkey a participant in a recent preaching workcontinue being equipped. From the very shop held in Sierra Leone. n beginning, preachers are encouraged to

Words from the Field

Langham Partnership’s vision is to see Majority World churches equipped for mission and growing to maturity through the ministry of Christian leaders and pastors who sincerely believe, diligently study, faithfully expound and relevantly apply the Word of God. Founded by John Stott, Langham operates three integrated programmes: Langham Preaching, national movements for training in biblical preaching; Langham Literature, providing seminaries, churches and pastors with evangelical literature; and Langham Scholars, offering doctoral scholarships for leaders who will train the next generation of Bible teachers in their own countries.

Langham Partnership works with Christian leaders from the Majority World in three integrated programmes of literature, preaching and scholarship to help the Church grow in depth, even as it grows in numbers. Langham Literature “With Langham’s support, we hope to be able to publish 15-20 books each year, with more and more by Cambodian writers who really understand the heart of Cambodia.” –Savy Dith, Editor at Cambodia’s only non-denominational evangelical publisher

Langham Scholars “Undergoing a PhD was always a stepping stone for me, a means to be equipped to minister to the Tongans, but also to proclaim the gospel in any possible way that I can. I will always be first and foremost a servant of Christ, burdened with love for the Tongans and feel that I can do nothing else but preach and teach them the love of Christ.” –Ma’afu Palu, Langham Scholar who has returned to teach at Tonga’s Sia’atoutai College

Langham Preaching “Church ministers who use Biblical expository preaching are now seen as true servants of Christ. They communicate the Bible message faithfully, and not as those who preach their own thinking.” –Frank Luvanda, Langham Preaching Coordinator, Tanzania